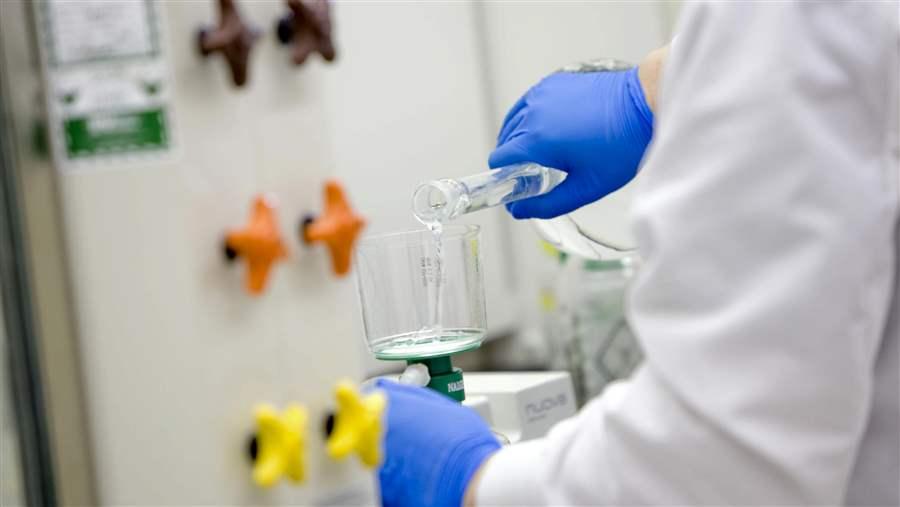 Liquid is poured from a beaker in a lab at Momenta Pharmaceuticals in Cambridge, Massachusetts. Momenta is developing biosimilars, generic versions of biological medicines. Biosimilars are starting to hit the market, prompting states to consider laws that require patients be told when the generics are substituted for name brands. (Getty Images)

Without the medicine Rachelle Crow takes for her rheumatoid arthritis, the 29-year-old Michigan woman’s face would frequently feel as if it were engulfed in flames. She would barely be able to crawl out of bed. She would have trouble opening or closing her fists or lifting her 3-year-old daughter.

Crow can do all those things thanks to Cimzia, one of a highly complex, usually expensive class of drugs known as biologics that derive from living organisms. Cimzia is recommended for women, like Crow, who are trying to get pregnant.

What keeps her up at night is a fear that a pharmacy could substitute a cheaper, not-quite identical drug for Cimzia without her or her doctor’s knowledge. It’s not only a return of her worst symptoms that she worries about. “If another medicine were substituted without telling me or my doctor, it could put my pregnancy at risk,” she said.

Fears like Crow’s have helped propel legislative attempts in many states this year to make sure that patients and doctors are notified whenever imitations deemed “interchangeable” by the US Food and Drug Administration (FDA) are substituted for brand-name biologics. Already, Colorado has passed a notification law, and Utah has revised its earlier law. More than a dozen states are considering comparable measures.

Notification bills began popping up in states two years ago, but most were defeated in the face of opposition from manufacturers of biologic copies, which are called biosimilars, and from organizations representing pharmacists, who objected to the extra workload notification requirements might entail.

But the legislative climate for enacting notification law is different now that biosimilars are finally coming on the market.

Earlier this month, the FDA for the first time approved a biosimilar. Manufactured by Sandoz, a division of the pharmaceutical company Novartis, Zarxio is the biosimilar version of Amgen Inc.’s anti-infection biologic Neupogen. Neupogen, which was licensed in 1991, is used for certain cancer patients undergoing chemotherapy or bone marrow transplantation among others.

The FDA confirms that at least three other biosimilars are awaiting FDA approval. Many others are in development.

The arrival of biosimilars has been eagerly awaited by patients and health consumer groups.

For Julie Wiles, a Houston resident with rheumatoid arthritis, biosimilars couldn’t come soon enough. Through a pharmacy assistance program, she was able to get the biologic Enbrel.

“I did not have flare-ups or joint pain” after starting on the Enbrel, Wiles said. “I could get up in the morning. The biologic was literally changing my life. I felt normal.”

But after six or seven months, the program was no longer able to supply her Enbrel, and her insurance company would not pay for the drug.

“That’s when I learned it would cost me $2,500 an injection, and I needed an injection every week,” Wiles said. She went back on conventional medications, which don’t control her symptoms nearly as well. 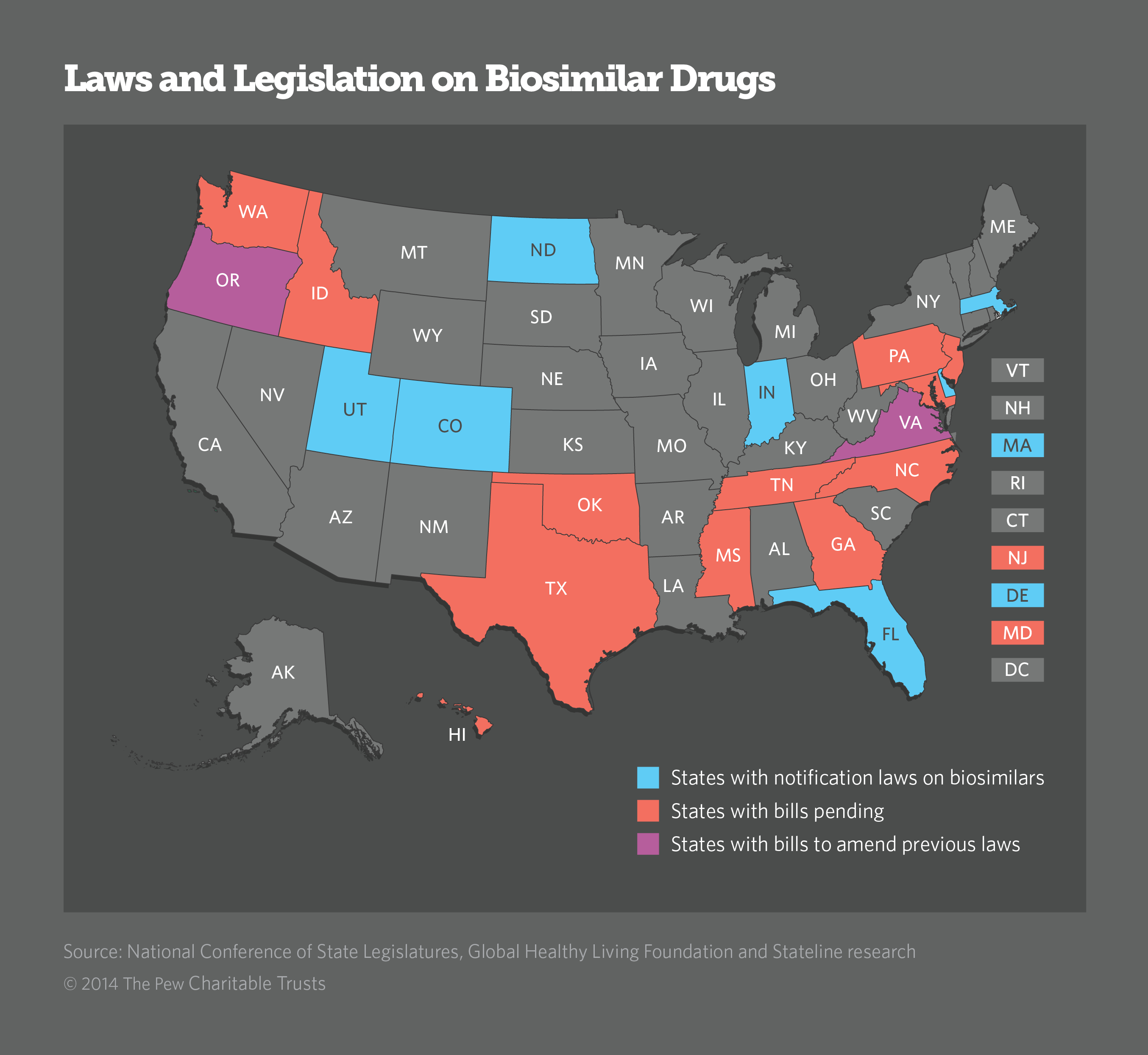 Biologics are among the most expensive drugs. As Wiles noted, some cost thousands of dollars a month. In 2010, spending on biologics in the U.S. reached $67 billion, or nearly 30 percent of the overall prescription drug market, with a much steeper growth rate than conventional, drugs.

Their imitations will cost far less. In Europe, where biosimilars already are available, they have been priced 15 percent to 30 percent less than their name brand versions. (In the U.S., generic versions of conventional, non-biological drugs can be up to 90 percent cheaper than name-brand versions.)

The Congressional Budget Office estimates that over a 10-year period, the availability of biosimilars in the U.S. drug market would reduce expenditures on biologics by about $25 billion and would save the federal government $5.9 billion, mostly in Medicare.

Express Scripts, the mail-order marketing giant, believes the savings will be much more. It projects savings of $250 billion in 10 years should only the 11 likeliest biosimilars hit the market.

The Federal Code of Regulations on food and drugs defines biologics as “any virus, therapeutic serum, toxin, antitoxin, or analogous product applicable to the prevention, treatment, or cure of diseases or injuries of man.”

First developed in the 1980s, they are more complicated than conventional medications because their molecules are far larger with more complex structures.

That relative simplicity of conventional, small molecule drugs means that generic versions are usually identical copies of the originals. That exactitude is not true of biosimilars. They may be very close to the originals, but scientists say it is not possible to create exact copies because of the complexity of the manufacturing process.

It is the differences between the name brands and the biosimilars that concerns patients. Small variations can make a difference in how patients respond, how well their symptoms are controlled and what side effects appear. If patients and their doctors do not realize that a substitution has been made, they may not understand changes in their reactions. That is why consumer health advocacy groups say notification laws are a must.

“We think it is absolutely essential that transparency be observed,” said Stephen Marmaras, head of state and national advocacy for Global Healthy Living Foundation, a non-profit organization advocating on behalf of those with chronic illnesses.

In the first wave of legislative efforts to pass notification laws, makers of biosimilars and organizations representing pharmacists were able to turn aside many of the bills. But, this time around, biosimilar makers, who are often owned by biologic manufacturers, are getting behind compromise measures.

Most of the measures proposed this year include provisions the association supports: that notification occur after the dispensing of the biosimilar and that where possible, notification be made through electronic medical records. Most of the new bills reduce the period of time that pharmacies must keep the record of substitution from five years to two.

The new bills also use the word “communicate” rather than “notify,” which is significant to biosimilar manufacturers who want to avoid any hint to the public that biosimilars are inferior products.

“The whole argument about ‘notify’ versus ‘communicate’ is to make sure you aren’t in any way saying that biosimilars are substandard,” said Michael Reilly, executive director of the Alliance for Safe Biologic Medicines.

Some pharmacist associations remain opposed to the notification laws, claiming it would create too much burden on pharmacists, an argument that didn’t sway Democratic Sen. Cheri Jahn, sponsor of the notification bill that passed in Colorado.

“The pharmacists still said you’re creating a lot more work for us, but that’s really silly,” Jahn said. “You might be talking about three notifications a week.”