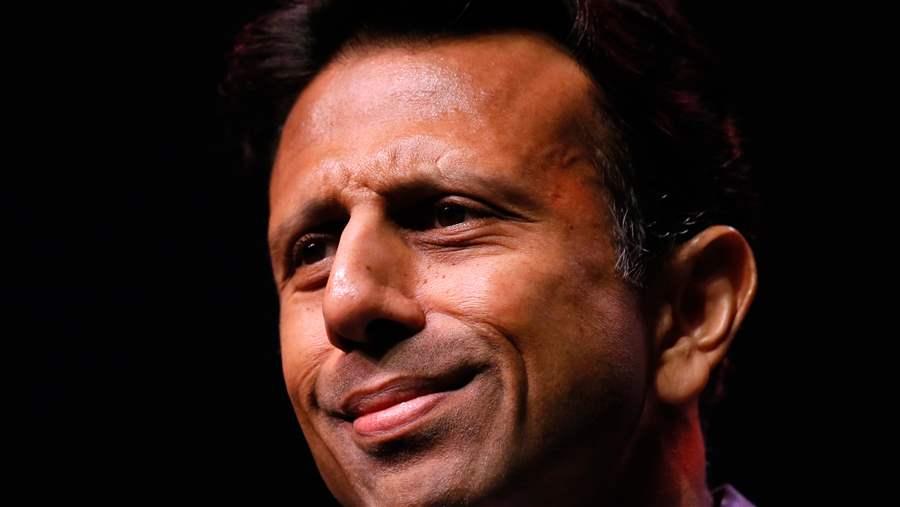 Republican Gov. Bobby Jindal of Louisiana is one of several governors seeking to cut higher education spending to close a budget shortfall. (AP)

Governors in nearly a half-dozen states want to cut state spending on colleges and universities to help close budget shortfalls, often sparking vehement opposition among state lawmakers of both parties.

Republican governors in Arizona, Kansas, Louisiana and Wisconsin and Connecticut’s Democratic governor have proposed higher education cuts for the coming fiscal year. Higher education spending traditionally is a juicy target for budget cutters because schools can make up the lost revenue by raising tuition.

But students and their families already are being squeezed by steadily rising college costs. In fiscal year 2013, schools got about 47 percent of their revenue from tuition, up from about 24 percent in fiscal year 1988, according to the State Higher Education Executive Officers Association. Democratic Gov. Dannel Malloy of Connecticut has suggested a tuition hike to compensate for the cuts, but the Republican governors are urging the schools in their states to find the necessary savings by trimming bureaucracy and consolidating campuses.

University officials argue that past budget cuts have pushed them to the breaking point, forcing them, for example, to rely heavily on adjunct professors and teaching assistants instead of full professors. During the recession, 48 states cut higher education spending. Alaska and North Dakota didn’t. They are the only two states spending as much or more on higher education than they did before the recession, when the numbers are adjusted for inflation, according to the Center on Budget and Policy Priorities (CBPP), a Washington, D.C.-based research group.

Some critics have urged the Republican governors to roll back recent tax cuts to spare the colleges and universities. But so far the governors have balked, arguing that lower taxes have helped working families and attracted businesses.

Nowhere is the controversy greater than in Louisiana, which has a complicated higher education system and a Republican governor who is considering running for president.

Gov. Bobby Jindal proposed a budget that would reduce higher education spending by $141 million in fiscal 2016. In recent weeks, he has proposed offsetting some of the cuts by getting rid of some refundable business tax credits, which have a total value of $526 million. But the business community is strongly opposing that idea. That leaves the Republican-dominated legislature in a bind, forcing members to choose between education and low taxes, two priorities they generally support.

State Sen. Conrad Appel, a Republican, said in an interview that if the higher education cuts Jindal proposed all go into effect “it would be really serious” and a big blow to colleges and universities. He said he wants to scale back the proposed cuts, but wasn’t prepared to say exactly how.

“If we vote to replenish, some of the cuts will be mitigated to some extent,” he said. But, he noted that the Louisiana public university system has “structural inefficiencies” that will mean more budget cuts in the future. He said he told college administrators last week that they should take steps to cut their budgets, whether that means consolidation of campuses or other methods.

Robert Scott, president of the Public Affairs Research Council of Louisiana, said that since Jindal became governor in 2008, the number of full-time employees at state colleges and universities has decreased 23 percent due to budget cuts, and that schools have been raising tuition along the way. But now, he said, “they are about to price themselves out of the market.” He said the flagship school, Louisiana State University, “still has some headroom” to continue tuition increases, but most of the small schools in the state system don’t have that luxury.

John Griswold, a fine arts professor at McNeese State University in Lake Charles, said his state is a test case for cuts to higher education.

“The conditions in Louisiana were perfect for testing an assault on state-funded higher education,” Griswold said. He noted the state has a conservative governor, legislative rules that preclude cuts in most spending except for higher education and health care, and an economic downturn prompted by the drop in oil prices.

“Similar conditions exist in other states, so conservative politicians elsewhere can also demand deep cuts to higher ed, based on populist appeals to ‘good business’ and an end to ‘welfare mentality,’” he said. 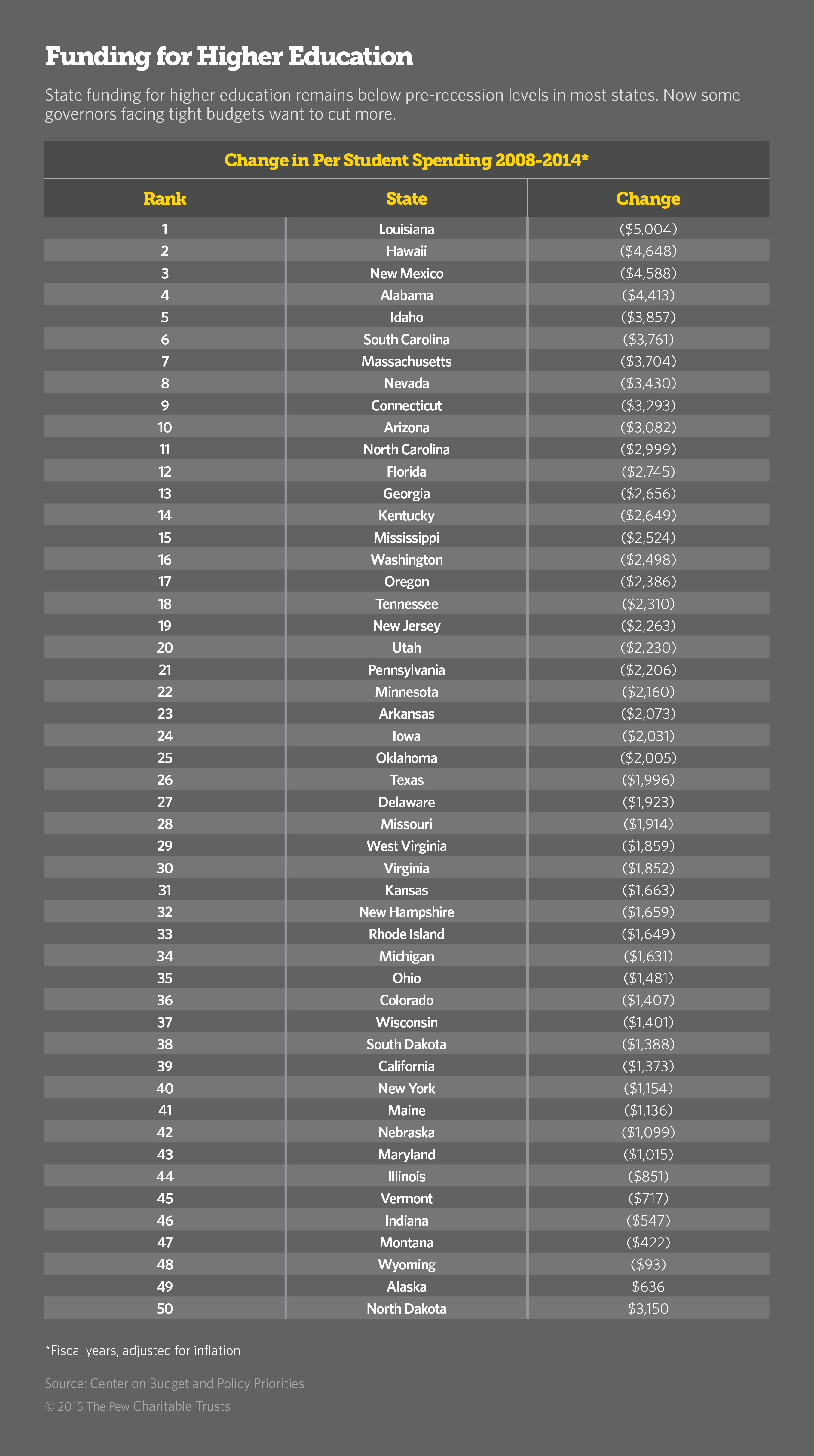 Republican Wisconsin Gov. Scott Walker, a potential presidential candidate who has cut state income and property taxes by $541 million during his tenure, has proposed cutting $300 million from the University of Wisconsin system.

According to Walker, that amounts to a 2.5 percent cut, but other analysts have put the figure as high as 13 percent. The fact-checking service PolitiFact split the difference, assessing the reduction at about 6 percent. The cut would be exacerbated by the fact that there is a tuition freeze in place.

“Through flexibility and empowering current leaders from across the system, (University of Wisconsin) System and campus leadership will have the tools necessary to deliver a high quality education in a strategic manner while saving taxpayers $150 million a year,” Walker’s spokeswoman, Laurel Patrick, said.

Meanwhile, two Republican state lawmakers have called for changes in the governor’s budget that would lessen the cut, including raising out-of-state tuition and requiring the university to spend down reserve funds.

“We will work toward a smaller, more manageable cut instead of the $300 million cut proposed in the governor's budget,” the two, Reps. Dean Knudson and John Nygren, said in a press release last week.

In Illinois, Republican Gov. Bruce Rauner recommended a reduction of nearly 6 percent in direct spending on state colleges and universities. Despite the cut, Rauner argues that “this budget proposal continues to offer state support to our public universities” through contributions to the universities’ retirement system and insurance benefits for university employees.

But Rauner faces strong opposition from the Democratic-controlled legislature and from the state’s universities.

Senate President John Cullerton said on his Facebook page that the governor’s budget cuts will “undermine access to health services, child care, affordable college and retirement security for working- and middle-class families” and vowed that the legislature will amend it. While Rauner has proposed cuts in a range of areas, the education chunk is drawing the most attention.

In Arizona, the Republican-led legislature went further than Republican Gov. Doug Ducey in cutting higher education, agreeing to a $99 million cut, down from an earlier legislative proposal of $104 million. Ducey had proposed a $75 million reduction as a way to pay for business tax cuts. Universities and proponents of higher education fought the governor’s cuts so doggedly that they prompted a backlash in the legislature, which upped them.

Arizona State University President Michael Crow called the action a “drastic remedy to the state’s budget troubles” and one that will come back to haunt the state when it has fewer college graduates contributing to the state’s economy.

In Connecticut, Democratic Gov. Dannel Malloy proposed cutting $10.6 million from the University of Connecticut system and an additional $20.6 million from the state’s regional universities. Malloy has expressed support for tuition hikes, after several years of urging that tuition merely keep pace with inflation.

In Kansas, Republican Gov. Sam Brownback since 2011 has pushed through a 25 percent reduction in the state’s top income tax rate, lowered sales taxes and eliminated a tax on small-business income. As a result, state revenue has declined by $685 million. Brownback now is looking to make cuts in education and elsewhere in an effort to balance the books.

“Spending on education is really an investment,” McMahon said. “As money is invested in human capital formation, each graduate is in the labor force for over 45 years and contributes increased earnings and tax revenue to state coffers.”