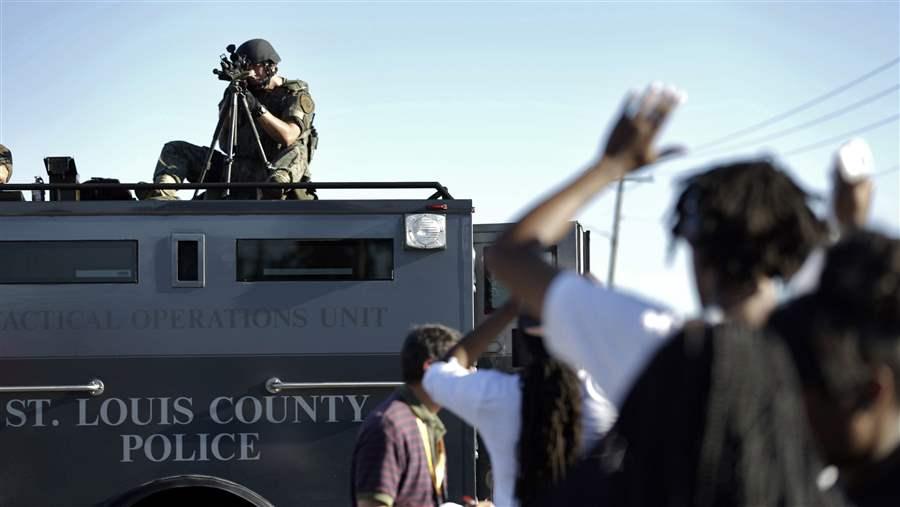 A member of the St. Louis County Police Department points his weapon in the direction of a group of protesters in Ferguson, Missouri, last summer. Alarmed by images like this, lawmakers in several states are seeking to rein in the militarization of law enforcement. (AP)

These are just a few examples of the growing militarization of police in America. It’s been ongoing for more than a decade, but rarely grabbed the nation’s attention until civil unrest erupted in Ferguson, Missouri, last August after the killing of Michael Brown, an unarmed black teenager shot by a white police officer.

Now, eight months after the confrontations in Ferguson between heavily armed police and protesters, lawmakers in more than a half-dozen states are trying to rein in the militarization of their own police forces. They point to Ferguson and say they want to prevent similar highly weaponized responses in their states.

The legislative response — backed by Democrats and Republicans, in red states and blue states — is a reaction to what one sponsor of such a bill calls the “law enforcement-industrial complex,” a play on the “military-industrial complex” term first used by President Dwight D. Eisenhower.

“You get these pictures that just shock the conscience,” said Republican state Sen. Branden Petersen of Minnesota, referring to news footage of heavily armed police patrolling streets or carrying out sting operations. His bill would bar law enforcement in the state from accepting gear that’s “designed to primarily have a military purpose or offensive capability.”

But Petersen and those backing similar efforts in other states — they’ve come up in California, Connecticut, Indiana, Montana, New Hampshire, New Jersey, Tennessee and Vermont  — face an uphill climb, partly because of the way law enforcement acquires the gear.

The equipment flows through a Pentagon surplus operation known as the 1033 Program, which makes available gear that the military no longer wants. Local agencies — including state and local police, and others such as natural resources departments — make requests through a designated state coordinator, who with Defense Department officials, has final say. There’s no federal requirement for state or local lawmaker approval or oversight, and any gear distributed is free of charge. About $5.4 billion worth has been distributed since the program began in 1997.

The program is a key source of tactical equipment, along with clothing (everything from parkas to mittens), office supplies, exercise equipment and appliances. Police say it’s invaluable in providing supplies they cannot afford and gear that can save officers’ lives.

But others call it a shadowy program that lacks oversight and lets police request anything they want, regardless of whether they need it. Some say it even tramples the 1878 Posse Comitatus Act, which prohibits the U.S. military from operating on American soil.

One reason the reaction to images of militarized police in Ferguson has reverberated in other states is the 1033 Program has been an equal-opportunity distributor, sending equipment all over the country to satisfy law enforcement requests.

A Stateline analysis of 1033 Program data shows that the 50 states hold nearly $1.7 billion worth of equipment, an average of nearly $34 million per state. Per capita, equipment values held by states range from less than $1 for Alaska, Pennsylvania and Hawaii to more than $14 for Alabama, Florida, New Mexico and Tennessee.

The type of gear the states have also varies widely. Alaska law enforcement, for example, has 165 rifles and almost $170,000 in night vision equipment, among other items.

The steady flow of gear has made the program popular among law enforcement, some of which say it’s necessary to combat criminals who have access to ever-more-powerful weaponry.

“Our chiefs used the program to obtain both practical and tactical equipment. They called it a really vital resource for acquiring vital public safety tools especially in a time of tight budgets,” said Andy Skoogman of the Minnesota Chiefs of Police Association.

“Those vehicles have been used to transport citizens, officers and equipment when the roads are closed due to snow, flooding and severe weather,” Skoogman said. “This program has really helped acquire key equipment.”

“This equipment has undoubtedly improved the safety of our nation’s law enforcement officers and enhanced their abilities to protect citizens and communities from harm,” Yost Zakhary, then-president of the International Association of Chiefs of Police, said in a statement last year as criticism of the program mounted. “I have seen firsthand the life-saving benefit of the 1033 program.”

The Pentagon also defends the program. “Ninety-five percent of the property that is transferred to local law enforcement through this program is not tactical,” Pentagon Press Secretary Rear Adm. John Kirby said last August. “It's not weapons. It's shelving, office equipment, communications gear, that kind of thing — furniture. I think it's important to keep this thing in perspective.”

None of that has stymied the push to reform the program. Last year, President Barack Obama’s administration released a review, which called for more local engagement and transparency, better federal coordination and additional training requirements.

That’s the tack many state lawmakers have taken in proposing bills to change the program. New Jersey became the first state to do so earlier this month, when Republican Gov. Chris Christie signed a bill increasing local oversight of the 1033 Program after it passed unanimously in both legislative chambers. (Christie vetoed a separate bill that would have given the state’s attorney general oversight of the program.)

Some bills simply aim for transparency. A bill in Montana, sponsored by Republican Rep. Nicholas Schwaderer, would require local authorities to notify citizens of any request for equipment — even a Facebook post would satisfy the requirement.

The Montana bill also would bar some types of equipment. But Schwaderer said the reporting requirement as “the most helpful part of this bill,” which is his top legislative priority this session. He said he’s alarmed by the way some agencies have amassed gear in the last decade without input from the public.

“This foundation sets a massive precedent in Montana and the country as to what kind of society we want to have,” Schwaderer said of his bill. “If you get to the point where you need a grenade launcher, we’ve got the National Guard.”

Whether any other state follows New Jersey’s lead in changing the program this year is uncertain. Some sponsors admit they face tough opposition from law enforcement officials and lawmakers who support them.

There’s little interstate coordination among lawmakers pushing the measures, although groups like the 10th Amendment Center, a think tank focused on limited government and states’ rights, have tracked some of the bills, and the American Civil Liberties Union has fought the militarization of police departments for years.

Some localities already have taken steps to pare down or roll back military weapons and equipment. In Minneapolis, the police department stopped bringing it in several years ago, and is trying to return or destroy what it still has.

And because of Ferguson, some citizens’ groups say they are more aware of how their police departments have been transformed and of the possible dangers an overly militarized police force poses.

As Anthony Newby, director of the Minneapolis-based Neighborhoods Organizing for Change, put it: “Ferguson really shed light on the fact that we are really just one or two decisions away from being in that position. It was just a reminder for us to really track it, and see if there’s a way to stop that from ever being an issue.”