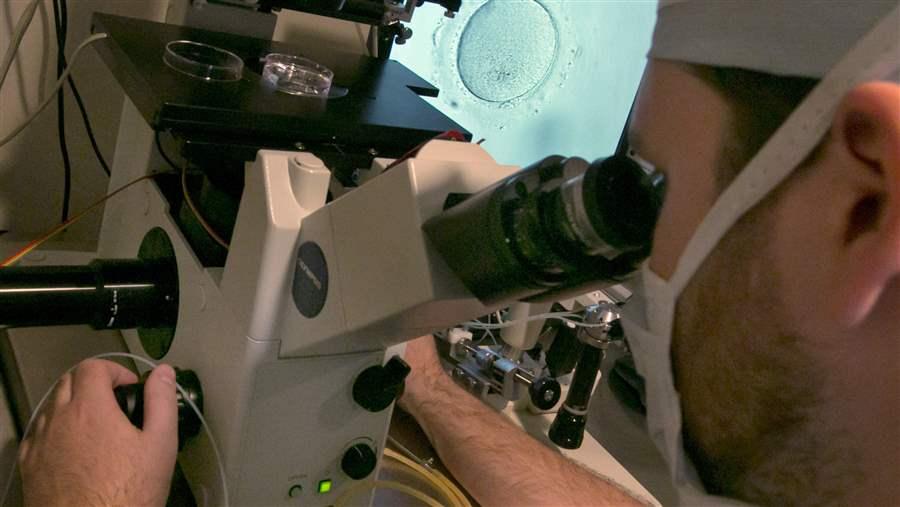 An embryologist uses a microscope to view an embryo, visible on a monitor, right, at Reproductive Medicine Associates of New York City. Even as assisted reproduction has become more common, states have avoided regulating the industry. (AP)

This story was updated to remove a reference to an individual named in an earlier version.

It passed a law giving children conceived via sperm donation access to the medical histories of their biological fathers. The law itself stirred no controversy. The oddity was that the legislature ventured into the area of “assisted reproduction” at all.

Assisted reproductive technology (ART) helps infertile couples to conceive. Compared to many other industrialized nations, neither the U.S. nor state governments do much to oversee the multibillion-dollar industry.

“The United States is the Wild West of the fertility industry,” Marcy Darnovsky, executive director of the Center for Genetics and Society said, echoing a description used by many critics of the regulatory environment surrounding ART.

The federal government requires laboratories engaged in assisted reproduction to be certified by organizations, such as the American College of Pathologists, and to report certain data to the Centers for Disease Control and Prevention (CDC). (One exception to minimal federal intervention: President George W. Bush’s ban in 2001 on the use of newly created embryonic stem cell lines in research.)

States are split about whether surrogacy contracts, usually between prospective parents and an egg donor, are permissible. But other aspects of ART are simply unaddressed by the states. For example, states don’t regulate how many children may be conceived from one donor, what types of medical information or updates must be supplied by donors, what genetic tests may be performed on embryos, how many fertilized eggs may be placed in a woman or how old a donor can be.

Lawmakers are wary of touching assisted reproduction, Darnovsky said, because of the incendiary politics that surround the issue of abortion, which touches on conception and embryos.

In terms of the number of people involved, the issue is significant. The CDC reports that about 12 percent of women of childbearing age have used infertility services and that 1.5 percent of all infants born in the U.S. are conceived using ART.

The first infant conceived through ART in the U.S. was born in 1981. Since then, assisted reproduction has experienced enormous growth. The CDC reports that in 2012, more than 65,000 live births in the U.S. resulted from ART, which generally refers to fertility treatments in which either eggs or embryos are handled. That number does not include artificial insemination, which experts believe results in far more births.

Other countries, such as Canada, the United Kingdom, Sweden, Germany and Australia, heavily regulate many aspects of reproductive technology. Many scholars, as well as some who have been through the assisted reproduction process in the U.S., believe this country should do the same.

“I think in the United States we need more regulation of assisted reproductive technologies to protect the rights of children, donors and parents,” said Naomi Cahn, a law professor at George Washington University and co-author of  the book “Finding Our Families: A First-of-Its-Kind Book for Donor-Conceived People and Their Families.”

Cahn believes donor-conceived children should at least have access to full medical information about biological parents, if not information about ethnicity and country of origin. Parents, she said, should have the right to know how many times a donor’s sperm or eggs were used to conceive a child. And donors should have a right to know what happens to their sperm or eggs.

The American Society for Reproductive Medicine (ASRM) takes umbrage at the suggestion that ART is lightly regulated.

“I used to call it the ‘myth of un-regulation,’ but it’s actually a malicious and often deliberate falsehood most often conveyed by folks with ideological opposition to reproductive medicine,” Sean Tipton, the ASRM’s chief lobbyist, wrote in an email message. “Reproductive medicine is one of the most heavily regulated fields of medicine in the US.”

As evidence, Tipton points out that the federal government regulates all drugs and medical devices, as well as the reproductive tissues used in ART. States, he said, license practitioners (as they do all medical professionals). But the heart of his argument is that “the professional self-regulation is extensive.”

ASRM does issue lengthy guidelines to its membership, which consists of fertility clinics and sperm banks. However, critics point out, it does not sanction those who are in violation of guidelines.

Critics argue that ASRM’s main function is to advance the business interests of its members, unfettered by government regulation.

“It’s a field characterized by strong anti-regulatory sentiment because it evolved as a business, not a research enterprise,” said Arthur Caplan, director of the division of Medical Ethics at New York University’s School of Medicine.

Debra Mathews of the Berman Institute of Bioethics agrees that the industry is lightly regulated because “assisted reproduction has grown up as a medical services business not under the auspices of medical research.” The federal government ensured that situation would continue when, in 1996, Congress passed an amendment banning the use of federal funds in research related to the creation of embryos.

There are also political reasons politicians have little interest in taking up ART legislation.

“It is unregulated because it touches on two, ‘third-rail’ issues,” said NYU’s Caplan. “It touches on abortion and also the creation of embryos, which politicians run away from because too many people still disagree about the right to use reproductive technologies, particularly who should pay for them and how much.”

The lack of regulation does have some benefits, critics say. Without regulation, for instance, gay couples and single people don’t face any built-in barriers to using ART to produce children.

But others see disadvantages, none more loaded than a lack of restrictions on the number of children that can be produced by any single donor. The concern is that offspring of a frequent donor could inadvertently meet and fall in love, raising the possibility of “accidental incest.”

Donor-conceived children also argue that donors should be subjected to better medical screenings. Generally, donors are only tested for sexually transmitted diseases. There are no laws requiring medical testing for genetic diseases or requiring that donors – usually in their 20s at the time of donation – update medical information as they age and inherited diseases may surface.

Many donor-conceived offspring believe that they, like their counterparts in Britain, should have a right to more than medical information and that the identity of biological parents should be revealed to them.

Many of those who donated eggs and sperm did so in the expectation of a lasting anonymity. They didn’t want unknown offspring to one day knock on their door.

But in the Internet age, the expectation or anonymity is increasingly diminished. Several websites, such as donorsiblingregistry.com and 23andme.com, enable those who share the same DNA to connect with one another. Through those websites and other Internet searches, thousands of people have been able to circumvent the anonymity offered by sperm banks and fertility clinics to identify biological parents, half-siblings or cousins.

If there is more regulation in assisted reproduction, it will probably come from those who have gone through the process or were the result of it.

That is what happened in Utah. The sponsor of the bill, Republican Rep. Dixon Pitcher, was buttonholed by an old friend who in her late 60s learned that the beloved, now-deceased man who raised her was not her biological father. The truth unraveled after a nephew with health problems underwent DNA testing.

“It was devastating,” she said. “I think I cried for about three months.” The woman, who asked that she only be identified as "Marie" to avoid embarrassing others, said she has since learned of eight half-siblings, some of whom she has now met.

Through the DNA research and other clues, Marie said that it became clear that the father of all of them was her mother’s doctor. Geneticists say that prior to modern fertility technology, doctors of women with infertile husbands often provided the sperm that enabled their patients to conceive.

Marie said she had hoped Pitcher’s bill would enable donor-conceived children to learn the identities of their biological parents, but she is pleased that at least some medical information will be made available as a result of the new law.

Other people also are clamoring for information about their donations or their biological parents.

Martin Garrison made donations to a sperm bank that was recruiting students at UCLA when he was a student there in the 1980s. He made $500 a month for making three donations a week. “It was work you could do that wasn’t painful,” he said. When he tried later to learn how many children he had fathered as a result of his donations, he kept getting different answers, ranging from one to 10 children. He said the bank never contacted him to ask him for a medical update.

Lisa Swanson, a lawyer, learned at age 30 that she was donor-conceived. When she tried to learn about her biological father, she ran into a dead-end with the clinic that arranged her conception.

“They told me all the records had been destroyed,” she said. “They also said they had no idea how to reach the doctor.”

“I know nothing about half of my genetic health information,” she said. More should be required of the industry, she said. Physicians “are creating human beings but destroying our ability to know where we came from.”