Children wait for shoes and school supplies at a charity event in the Skid Row area of Los Angeles. Roughly 2 million more children live in poverty now than in 2007. (Getty)

Five years after the Great Recession ended, many Americans are still reeling from its effects. Perhaps no group was harmed more by the downturn than children.

Roughly 2 million more children live in poverty today than at the start of the recession, according to a new study by First Focus, a bipartisan children’s advocacy group, and PolicyLab at the Children’s Hospital of Philadelphia.

The study analyzes four areas affecting children’s well-being: health, hunger, housing, and abuse and neglect. In most ways, children are worse off than they were in 2007, the beginning of the economic contraction. As of 2013, for example, 14.7 million children were living in poverty, compared to 12.8 million at the start of the recession.

In which area were children hit hardest by the recession?

Food security. As of 2013, 15.7 million children lived in households where at least one family member didn’t get enough to eat on a regular basis. That’s 3.3 million more than at the onset of the recession. But the Supplemental Nutrition Assistance Program (SNAP), the federal government’s largest anti-hunger program (commonly known as food stamps), helped ease the situation. The number of SNAP beneficiaries rose by 21 million between 2007 and 2013 to 46.5 million, resulting in about 1 in 3 kids receiving some form of nutrition assistance.

Still, it’s difficult to tell if SNAP and other food assistance programs are meeting the needs of impoverished families. The study also found that many states tightened eligibility standards for food assistance. During the recession, SNAP was enhanced with federal stimulus funding, but that money has dried up.

“Food insecurity increased dramatically,” said Rachel Meadows, a communications and policy associate with PolicyLab. “It showed us a lot of families were really struggling even technically after the Great Recession had ended.”

How did foreclosures affect children?

More than 2 million children lost their homes as a result of foreclosures, and up to 6 million children continue to be at risk of losing them. According to the latest data, 46 percent of all households with children in 2011 faced issues of housing affordability, physically inadequate housing or overcrowding. In 2012, 40.9 million households – more than a third of U.S. households – were considered “cost burdened” because they spent more than 30 percent of their income on housing.

The study found that more than 1.6 million children were homeless during each year of the recession, and 40 percent of those kids were under age six. The report also found that the supply of affordable housing is inadequate to meet demand. But federal data are conflicting. The U.S. Department of Housing and Urban Development reports that rates of homelessness are going down. But the U.S. Department of Education reports that for kids, particularly students, the number is increasing. 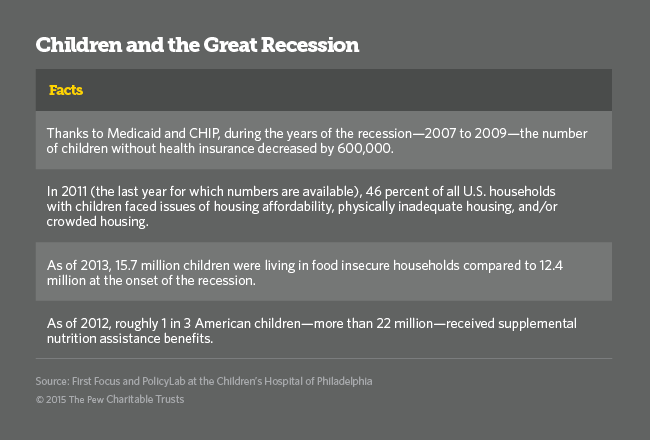 Did children experience more abuse and neglect during the recession?

The data are mixed. Federal statistics suggest overall rates of child abuse decreased during the recession. But rates of reported neglect increased 21.6 percent between 2007 and 2009, from 436,944 cases to 543,035 cases. Between 2009 and 2012, reported neglect cases decreased 2 percent, to 531,241 cases. (Abuse, which can be physical, mental, emotional or sexual, requires intent on the part of the abuser to do harm, while neglect occurs when a parent or caretaker fails to attend to a child’s needs.)

Federal spending on child abuse prevention programs remained about the same during the recession, while spending at the state level varied widely. About half the states spent more, and half spent less.

Overall, state and local spending declined by $349 per child between 2008 and 2011, as states slashed spending on social services to close budget gaps.

“Recovery takes several years,” Meadows said. “Strong safety-net programs worked. But if you cut the safety nets too quickly or too much, you could stall or reverse the recovery that’s still going on.”

Is there any area in which children’s lives improved during the recession?

Millions of jobs were lost during the recession, and millions of children lost health insurance through their parents’ employer-covered plans. Despite this, the uninsured rate among children is lower today than when the recession began, according to Ed Walz, vice president of communications for First Focus.

Investments in Medicaid and the Children’s Health Insurance Program (CHIP), along with CHIP eligibility expansions, played a big role in lowering the rates of uninsured children.

During the depths of the recession, 2007 to 2009, the number of uninsured children shrank by 600,000, while the number of adults without health insurance increased by 6.3 million.

CHIP, which provides free or low-cost insurance to families that make too much to qualify for Medicaid, is a federal-state partnership. States are required by federal law to provide CHIP coverage, but they have the flexibility to determine the extent of benefits and can tailor their programs to meet the needs of their populations. BadgerCare in Wisconsin, for example, looks different from PeachCare in Georgia.

The federal government didn’t require states to expand coverage during the recession, but states weren’t allowed to shrink it—and they didn’t. Between 2008 and 2012, 12 states loosened eligibility requirements to include children from slightly higher-income households. The report found that states tried to limit out-of-pocket health care costs for low-income families.

“Kids didn’t lose any ground. It was success and continues to be a success,” said Kathleen Noonan, co-director of PolicyLab.

After the recession, the number of uninsured children continued to drop each year. But under the Affordable Care Act, federal funding for CHIP will expire in October unless Congress extends it.