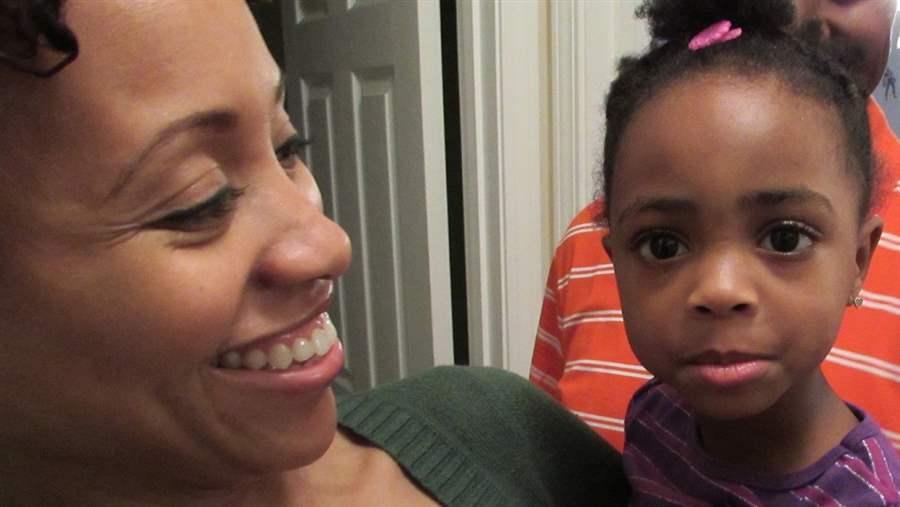 Toye Powell, shown with her daughter Arrenton and husband Tavaras, still lives near her childhood home in suburban Atlanta. A new study shows that black families are less likely to move than white ones, and they’re more likely to return to the same county after leaving. (Tim Henderson/Stateline)

STOCKBRIDGE, Georgia – Tavaras Powell moved hundreds of miles south to this Atlanta suburb in search of a job after getting his college degree 15 years ago. Here, he met and married Toye, who has lived in the area all her life.

The Powells—Tavaras, 37, and Toye, 35—embody some of the latest trends in migration by African Americans: Some are moving for economic opportunity, but many are extremely loyal to childhood homes.

A new study shows that today’s black families are less mobile than whites or previous generations of black families, and are tending to stay in the same state and even the same county where they were raised. Some scholars see this as evidence that blacks have been left out of recent regional booms in tech and energy, but it also may be that they simply are making shorter moves from cities to nearby suburbs.

The study, by sociologist Patrick Sharkey of New York University in the journal Demography, found a sharp difference between the current generation, born between 1952 and 1982, and earlier waves of African Americans who moved from the rural South to Northern cities in the last century, which historians call the Great Migration.

“This new geographic immobility is the most pronounced change in black Americans’ migration patterns after the Great Migration,” Sharkey wrote. “In the most recent generation, black Americans have remained in place to a degree that is unique relative to the previous generation and relative to whites of the same generation.” 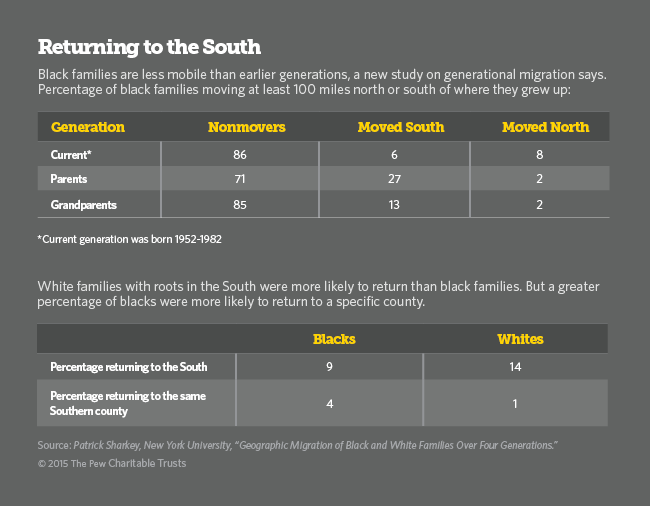 Many Blacks in the South Stay Put

Sharkey found that nationwide, 85 percent of African Americans born between 1952 and 1982 had not moved from the area where they grew up. For his study, he used a series of surveys that followed families from 1968 to 2007 that were conducted by the Panel Study of Income Dynamics at the University of Michigan.

A Stateline analysis shows that blacks are more likely than whites, Hispanics or Asians in Southern states to have been born in the state where they live—ranging from 89 percent in Louisiana to 63 percent in Virginia and Georgia.

The same also is true in California, Delaware, the District of Columbia, Illinois, Missouri and Oklahoma.

Some scholars, such as Sandra Susan Smith, an associate professor of sociology at the University of California, Berkeley, worry that the findings imply that African Americans are not finding a place in job booms in construction, technology and energy industries in other parts of the country.

Many cities and states have tried to create more jobs requiring highly skilled workers, including offering tax incentives to companies that provide them. But many African Americans don’t have the education and training for such jobs.

“The economic expansions of the last 25 years or so that might have inspired families to move have been concentrated in industries and occupations that have not been traditional niches for blacks,” said Smith, who is black. “If you’re black, these economic developments would not likely have caused you to pick up and leave.”

Smith also suggested that a lack of long-distance movement may mask a recent trend of black families moving out of inner cities and into the suburbs. That would help account for Sharkey’s findings that many blacks remain in the same states and even counties where they were born.

“This suggests that there is mobility, but much more contained than that studied by Sharkey,” Smith said. “Such a movement would likely reflect two phenomena: The increased economic cost of living in big cities, which pushes those without great means to the suburbs, where more than half of the poor now currently live, and the continued promise that the suburbs hold for many in the middle class—less crime, more space, parks.”

Despite finding less migration, Sharkey did find a reversal of direction compared to previous generations, with today’s blacks tending to move to the South rather than to the North.

Sharkey said his findings don’t conflict with recent accounts of a new Great Migration by blacks headed to the South, as William Frey of The Brookings Institution called it in 2004 in looking at movement in the years 1965 to 2000.

Frey noted at the time that the South had gained black migrants in the 1990s, reversing a 35-year trend, with metro areas like Atlanta leading the way. There were “brain gains” in the South, Frey wrote, as Georgia, Texas and Maryland attracted the most black college graduates from 1995 to 2000.

“I don’t think it necessarily conflicts,” Sharkey said of his findings compared to Frey’s. “I do think the emphasis is different, as he hasn't focused on the drop in long-range mobility.”

Frey acknowledged that he did not address generational differences as Sharkey did. “It may be the case that later generations of Northern blacks are not moving across counties or anywhere as much as earlier black generations,” Frey said.

When black Americans do move, it’s often for economic opportunity. That was the case for Tavaras Powell, who moved more than 300 miles south to seek his fortune in the Atlanta area after getting his college degree in 2000 from Elizabeth City State University in North Carolina.

“Atlanta was like the candy land. Everybody wanted to go,” said Powell, an environmentalist who monitors water quality in a neighboring county.

His wife Toye, meanwhile, said she has had no desire to move because she feels more comfortable near her hometown than in any other place she has visited. She is an elementary school teacher.

“You look at the news and you see African Americans in not the best light, but in Atlanta you see lots of positive examples,” she said. “It’s nice to see, in Atlanta, African Americans who are successful and doing a great job, doctors and lawyers. You get used to that and you just get kind of comfortable.”

Tavaras Powell has a family history that conforms with the Great Migration and return to the South. Several relatives in his grandparents’ generation moved from North Carolina to Bedford-Stuyvesant in Brooklyn, New York, where he often visited during the summer as a child. But in the 1990s they returned to their childhood home in North Carolina.

“They retired and went right back to the same spot, all in arm’s reach of each other.  They had a totally different lifestyle and they came right back,” Tavaras Powell said.

Economics as well as a feeling of home also come into play. Carlotta Harrell, a management consultant in Henry County, who is black, happily remains here where her grandparents settled.

“I’ve done a lot of traveling, and to be perfectly honest there is no other place I would rather live,” said Harrell.

“The house that I live in would probably cost $2 million up North,” she said. “I hate the weather. And to me, the people up north are just not as friendly. There is such a thing as Southern hospitality.”

“It is my contention that all Southerners eventually go home,” said Allison Glock, a writer who is white and who has blogged about the difficulty of staying away from “the bleached-linen, biscuit-baking, horsefly-biting landscape of my childhood.”

For her, the lure was more cultural than economic, she said, although she doesn’t mind mentioning her low mortgage payments to New York City friends.

“I missed the easy sociability of the place,” she said. “When we get off the plane in Atlanta, I am always so happy to hear people chatting and joking with each other… Nobody talks to each other in Denver or Los Angeles. You strike up a conversation with a stranger in L.A. and it's like you've asked them to take off their pants.”