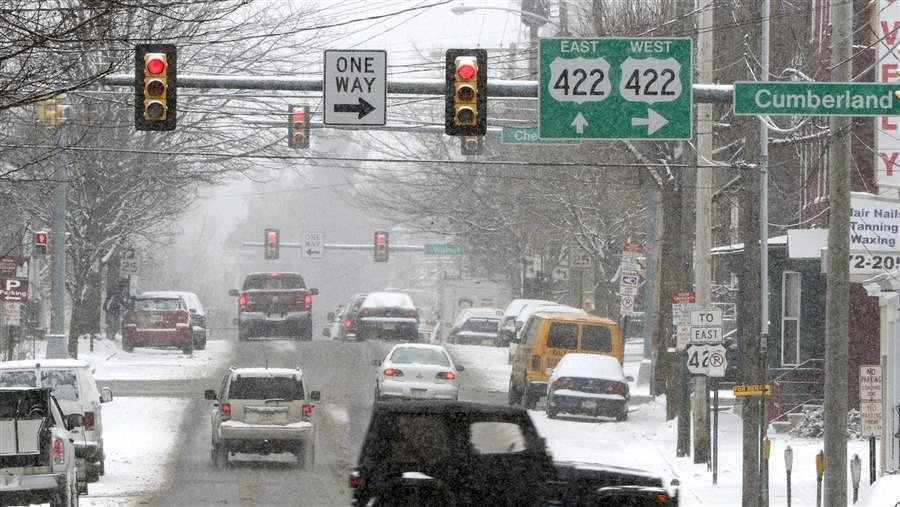 Lebanon, Pennsylvania, received permission from state transportation officials to adjust the timing of traffic signals like these pictured in January to ease traffic flow in the city. A growing number of cities, counties and states are trying to tackle traffic congestion problems by improving the way lights are synchronized. (AP)

You’re stuck in traffic, waiting for the signal to turn green. When it finally does, you inch forward, as several cars up ahead of you make it through the intersection. Then the light turns red and you hit the brakes again, only to repeat the process.

Most drivers can relate to this frustrating scenario, whether they’re commuting to work or heading to the mall. Now, a growing number of cities, counties and states are trying to tackle the traffic congestion nightmare by improving the way lights are synchronized.

They’re using a variety of high-tech tools to prevent backups at intersections and smooth the flow of traffic. Some collect and analyze data to pinpoint problem spots. Others use advanced technology to fix the problem right then and there.

Transportation experts say that revamping the way signals work will reduce congestion, save fuel costs, cut down on air pollution and make the roads safer.

“If you’re a driver, it’s good because it’s going to reduce unnecessary delays at the intersection,” said Aleksandar Stevanovic, director of the Laboratory for Adaptive Traffic Operations & Management, a research center at Florida Atlantic University (FAU). “That cuts down on fuel consumption and also impacts safety. If you have a smooth traffic flow, that potentially will reduce the number of accidents. Every time you make a stop, there’s a chance of a rear-end collision.”

Better traffic management means more than installing a “Don’t Block the Box” sign at busy intersections. The goal is to figure how signals can accommodate changing traffic patterns, so when a driver approaches one signal that’s turning green, the next one up the road is also green by the time he gets there.

A 2012 report by the Texas A&M Transportation Institute, a university-based research agency, estimated that in 2020, the delays caused by traffic congestion nationally will grow to 8.4 billion hours, resulting  in the average commuter wasting 45 hours and 25 gallons of gas.

Utah, Minnesota and Florida are among the states that are out front in making traffic signal improvements a priority. So are cities that include Austin, Portland and Bellevue, Washington.

But many transportation agencies still have a long way to go.

A 2012 report card issued by the National Transportation Operations Coalition, a group of public and private transportation associations, found that while states and local governments were making progress managing and operating the nation’s 311,000 traffic signals, they still faced big challenges, including a lack of funding. The report gave agencies a C grade for signal timing operations and an F for traffic monitoring and data collection.

Over the past few decades, most transportation agencies have replaced old-fashioned, pre-timed traffic signals that changed at consistent intervals with newer technologies that detect the presence of cars and adjust the green time accordingly. Many use electromagnetic loops in the pavement. When cars drive over the loops, they activate sensors, prompting the light to stay on for a certain period. Often, the timing at intersections only gets reset every three to five years.

In recent years, some local and state agencies have been using more sophisticated equipment to manage the signals. While they still use loops, video cameras and radar to gather data on traffic patterns, they have changed the way they handle that information. Instead of having a traffic engineer set and reset a signal’s timing in a control room, they install “adaptive” systems that use algorithms that work in real time. The signals essentially figure out how much traffic is coming their way and adapt automatically to change their timing.

“The signal may say, ‘Hey, for the last three or four cycles, I’ve got new demand. Maybe I should give it more green time,’” said Kevin Balke, a research engineer at the Texas A&M Transportation Institute.

FAU’s Stevanovic said that only about 3 percent of traffic signals nationwide use adaptive systems. But he noted that those numbers have spiked from about 4,500 in 2009 to about 6,500 in 2014. And the number of agencies using them has risen from 30 to about 150. Stevanovic posts updated information showing adaptive signal locations across the U.S. on an online map.

While the cost of adaptive systems has gone down over the years, it still can be expensive – ranging from $30,000 to $50,000 per intersection. Stevanovic said the systems are cost-effective in the long run because they can reduce delays anywhere from 5 percent to 40 percent.

Oakland County, Michigan, has been a leader in using adaptive signals. It has the second largest such system in the U.S., said Craig Bryson, spokesman for the Road Commission for Oakland County.

Bryson said his agency installed the system, which it imported from Australia, at its first intersection in 1992, after the community experienced explosive growth and there wasn’t enough money to widen all the roads to accommodate the traffic. Over the years, the county has repeatedly updated the system, which uses video cameras to detect vehicles, as hardware and software have evolved.

Today, 675 out of 1,200 intersections with traffic lights in the agency’s jurisdiction have adaptive signals, and officials hope that nearly all eventually will. Bryson said that the total investment has been more than $100 million, the bulk of which has come from federal funding.

Studies have shown that the system has improved both traffic flow and safety in Oakland County, according to Bryson. In Troy, for example, serious injury crashes at intersections fell more than 50 percent.

Bryson said the adaptive technology also is an asset when the area is hit by power outages. In the past, that would mean major traffic backups because all the signals would be out of whack and crews would need to manually reset them. With the adaptive system, signals automatically come back online when power is restored and adjust to current conditions.

Oakland County also is one of a growing number of communities that have started to use a more advanced type of adaptive system in which one signal “talks” to another signal down the pike, telling it how much traffic to expect, so it can make adjustments and be ready.

“The intersection upstream may tell the intersection downstream, ‘I just released a bunch of vehicles heading your way, so get ready for them,” said Texas A&M’s Balke. “What’s unique is they don’t talk to the boss (the centralized computer system), they talk to each other.”

Utah has been an innovator in traffic signals. It operates a statewide system that receives real-time automatic data measurements from its signals. The system uses video cameras, radar and loops to determine how many cars are going through an intersection, their speed and whether they get a green or red light. That information is collected through a fiber optic network and sent to the traffic operations center, which uses algorithms to produce data that engineers use to manage the signals, improve efficiency and correct problems manually.

“We don’t have to rely on someone calling us to complain,” said Lisa Miller, spokesperson for the Utah Department of Transportation (UDOT). “We can see a problem almost immediately and send someone out to fix it.”

Utah’s system, which was developed by Purdue University with the assistance of the Indiana Department of Transportation, is connected to about 80 percent of the state’s 1,950 signals, including those owned by cities and counties. UDOT also created a website that shows real-time information from most traffic signals in the state.

For the most part, UDOT uses its data as a planning tool to monitor signal timing and make future changes at intersections or corridors when needed, according to Mark Taylor, the agency’s traffic signal operations engineer. But Taylor said the state plans to test new adaptive technology within a year that would allow the signals to make immediate changes using real-time data.

The Utah model is being picked up by agencies in other states and cities, including the Minnesota and Georgia departments of transportation, Taylor said, noting that it has made a big difference in helping reduce the number of cars waiting at red lights in his state.

In April 2013, for example, 36 percent of cars arrived at red lights along University Avenue in Provo, Taylor said. By last month, that number had dropped to about 12 percent.

Just as with smart phones and automobiles, many companies are scrambling to develop or test new traffic signal technology.

One type that’s causing excitement among transportation experts uses wireless communications that would allow cars to talk to other cars, as well as to traffic signals. It would let a driver know the best speed to go to avoid having to stop at so many traffic lights. The driver might see a message on his dashboard saying that a light is going to turn red in the next five seconds, so he should reduce his speed. Or it could tell him that if he stays at 25 mph, he won’t hit as many reds.

Dennis Motiani, executive director of the National Operations Center of Excellence, a nonprofit resource center funded by federal and state transportation officials, cautions that while many of these cutting edge systems are promising, it may take a while for government agencies to adapt them.

“Every year, everyone changes their phone these days,” Motiani said. “But with government, it’s difficult to make changes. It’s a little slow in reacting to technology.”

And even with all the technological advancements, it doesn’t mean that traffic headaches for drivers will disappear.

“We still have significant congestion in Oakland County at rush hour, even with our adaptive signals,” Bryson of the county’s transportation agency said. “There are just too many cars on the road and you can’t change that. But it would be far worse if we didn’t have this system.”