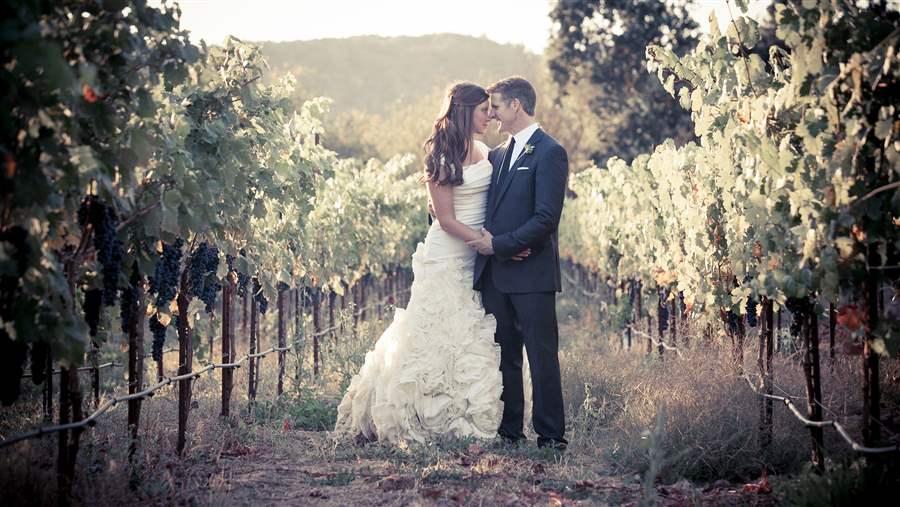 Death-with-dignity advocate Brittany Maynard and husband Dan Diaz at their wedding. Maynard had an incurable brain cancer and ingested a lethal medication to end her life, drawing attention to the aid-in-dying issue now being considered in several states. (PRNewsFoto/Compassion & Choices)

The photo caption to this story has been updated to note that Brittany Maynard died after ingesting a lethal medication.

The story was updated to correct the name of the American Academy of Hospice and Palliative Medicine and to note that Erwin Byrnes received lethal medication through a feeding tube.

After he decided to hasten his death, Erwin Byrnes, who had advanced Parkinson’s disease, set about planning all the details of the memorial service that would follow.

He designated the nearby DoubleTree Hotel in Missoula, Montana, as the venue. He asked his old friend Gene to serve as master of ceremonies. He selected the entire menu—shrimp (because no one doesn’t like shrimp), sandwiches, beer and the hotel’s oatmeal cookies with chocolate and walnuts that he relished. He selected music that would soothe his mourners, including the Frank Sinatra tune “September Song” and Louis Armstrong’s classic “It’s a Wonderful World.”

It came off just as the former high school principal had wished—just as his death had five days earlier on St. Patrick’s Day last year. Byrnes, later described by his wife as “a good Irishman,” had selected that day as most suitable for his departure from this world. On that morning, with his family surrounding him, he squeezed a valve on a tube leading to his body, sending a fatal barbiturate his physician had legally prescribed coursing into his bloodstream.

“It was a beautiful way to be able to end his life,” said Erwin’s wife of nearly 64 years. “In peace and in control and with dignity.”

It happened only because of a Montana Supreme Court decision in 2009 that has put the state in company with four others that allow assisted suicide or, as proponents prefer, “death with dignity” or “medical aid-in-dying.” The states permit physicians to prescribe lethal medications for terminally ill patients, who then self-administer the medications.

Medical aid-in-dying has been approved through a variety of routes. Oregon (the first state where it became legal in 1997) and the state of Washington passed ballot measures. Vermont’s legislature adopted a law. And in New Mexico, as in Montana, it was allowed by the courts. A New Mexico district court judge ruled in January that medically assisted suicide was legal. The state attorney general has appealed the case to the state Court of Appeals and a ruling is expected in a few months.

(Voters in Massachusetts narrowly voted down a medical aid-in-dying initiative in a 2012 referendum.)

Oregon reports  that since 1997, lethal medications were written for 1,327 patients of whom 859 died from using those prescriptions.  In Washington state from 2009 through 2013, lethal prescriptions were given to 547 patients, of whom 359 died from ingestion. 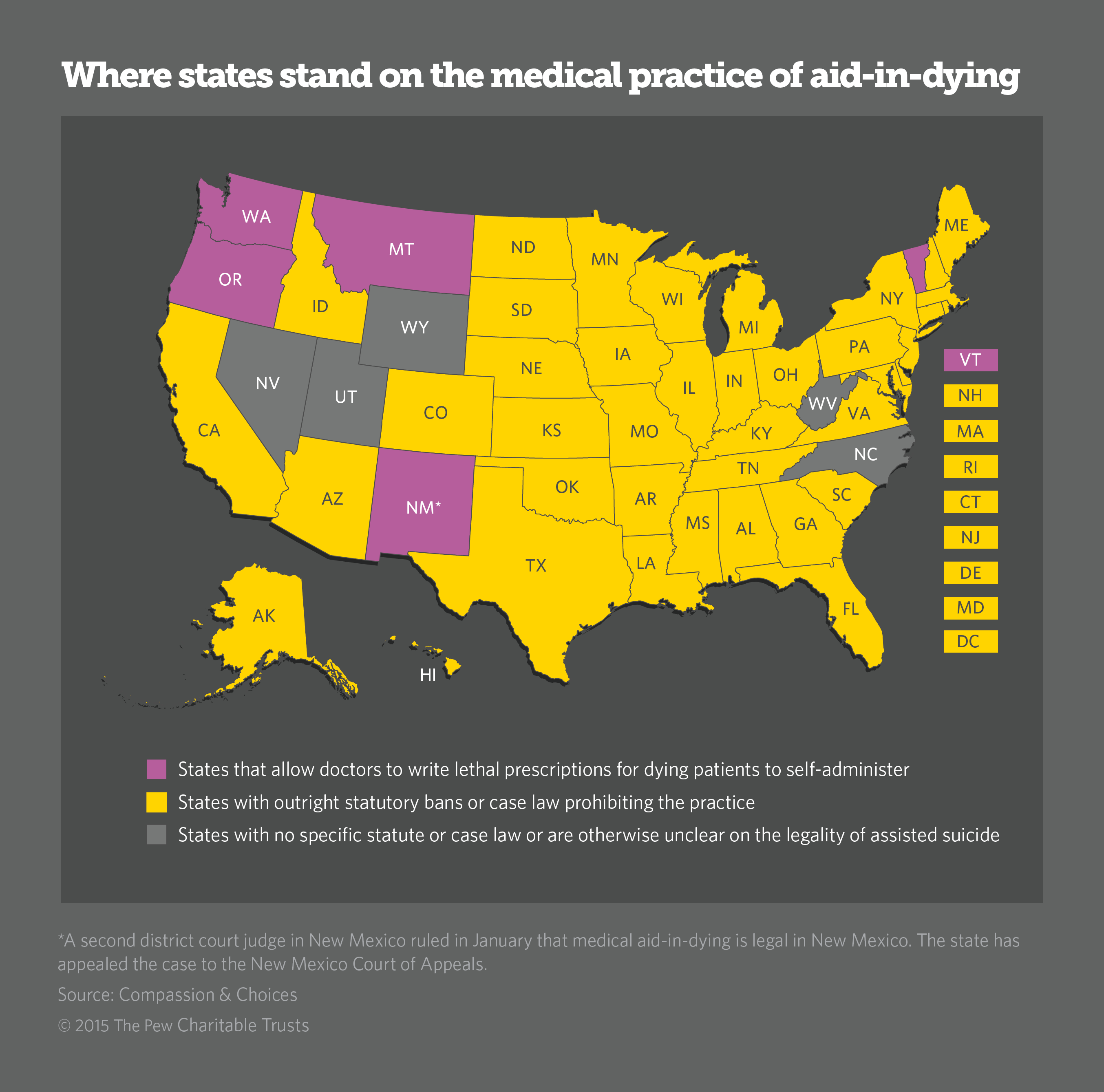 Spreading to Other States

Proponents, such as Compassion & Choices’ Sean Crowley, hope the issue follows a path similar to another political movement: marriage equality for gays. Proponents of gay marriage won victories in referendums, in state legislatures and in the courts. “Like them,” Crowley said, “we are pursuing whatever are the most advantageous strategies in each state.”

As with gay marriage, proponents of medical aid-in-dying say popular opinion is trending in their direction. They point to a number of national and state polls, such as one last month by the Eagleton Institute at Rutgers University in New Jersey, that show significant majorities of Americans support giving terminally ill patients the option of ending their own lives peacefully.

The issue gained high visibility late last year through the plight of 29-year-old Brittany Maynard, an attractive, articulate young woman with an incurable brain cancer who publicly expressed her intention to end her life. Surrounded by family, she did so in her Portland, Oregon, home Nov. 1, by taking a lethal medication.

The states that allow medical aid-in-dying have generally adopted Oregon’s practices, which require the patient to be at least 18 years old, have a terminal illness with a prognosis of less than six months to live and the capacity to communicate health care decisions. The patient also must make two oral requests to the physician and one written request signed in the presence of two witnesses.

In Montana, an organization called Montanans Against Assisted Suicide spearheaded two bills in Montana’s legislature this year to criminalize prescribing lethal medications to dying patients. One, which would have resulted in homicide charges against doctors who prescribed lethal medications to the terminally ill, failed in a 51-49 vote. The other, which would subject doctors to a 10-year prison sentence for the same offense, has yet to come up for a vote.

Bradley Williams, president of Montanans Against Suicide, argues that medical aid-in-dying would lead to family members ridding themselves of old and infirm relatives against their will. Allied with him are several disability organizations also opposed to prematurely ending the lives of those who others may believe to be burdens or have less than worthwhile lives.

Aid-in-dying supporters in Montana have not achieved legislative success either. While the Montana Supreme Court ruling allows the practice, it didn’t create any policies, such as Oregon’s, that would govern it. Montana state Sen. Dick Barrett, a Democrat, has repeatedly tried to pass legislation that would spell out policies but without success.

Also opposed to death with dignity laws are some—though not all—of those who practice hospice and palliative care, who worry that their efforts to improve their services will be politically damaged if they are associated with the far more inflammatory aid-in-dying movement.

For many physicians, the issue is one that concerns the practice of medicine. “I’m very worried about it because I meet people in my practice who conflate hospice and palliative care with assisted suicide or euthanasia,” said Ira Byock, director of the Providence Institute for Human Caring in California, which provides services that support patients and their families' lives and shares expertise and best medical practices with clinicians. He is also the author of the book “The Best Care Possible.”

The purpose of palliative care, Byock said, is to relieve suffering and, when necessary, to ease the way for the dying and their families—not to kill patients. “One of the founding principles of palliative care is that we did not hasten or delay a person’s dying.” Medical aid-in-dying, he said, becomes a viable option for people because of a shortage of or lack of access to quality hospice and palliative care.

Byock pointed out that contrary to common belief, the majority of those who ended their lives under Oregon’s law did not point to pain as the main reason. Instead, they cited loss of autonomy, decreasing ability to participate in activities that made life enjoyable and loss of dignity.

Even if pain was the chief complaint, Byock said, it can always be relieved, including by sedation.

But that is not always an acceptable alternative to some, such as Dr. Eric Kress, a Montana internist and palliative care doctor, who said he had prescribed lethal medications to 10 terminally ill patients and had been present for the deaths of four of them.

“I’m totally for delivering good palliative and hospice care for these patients as long as they want to have it,” he said. “However, there’s definitely a small group of patients that can’t be palliated very well. And they’ll sit there on a morphine drip with 50 milligrams an hour and still be in terrible pain. They end up in permanent sedation.”

Permanent sedation, he said, means a patient would be sedated into unconsciousness to end their physical suffering, while their disease progressed and eventually killed them.

“Nobody who has ever been involved in terminal sedation has ever felt that good about it,” Kress said. Yet, he said, those he attended during aid-in-dying are frequently surrounded by family, and are able to engage in meaningful conversations and farewells.

“I’ve never been to an aid-in-dying death where someone felt bad about it,” he said. “To me, aid-in-dying is patient-centered care.”

The American Academy of Hospice and Palliative Medicine is noncommittal on the practice. “We’re taking a neutral position because it’s very complicated, and we don’t have a consensus,” said Joe Rotella, the academy’s chief medical officer. “I would tell you that everybody has strong feelings about it.”

A Lifetime of Memories

Toward the end of 2013, Erwin Byrnes, in his 80s, returned home from a hospital stay with a feeding tube, weakness throughout his body and unsteadiness on his feet. He fell several times, once breaking a bone in his upper arm, which caused him great pain.

His condition worsened. He couldn’t lift himself out of bed or bathe himself. Taking his medicine was an all-day regimen. By February of 2014, he’d had it. “He knew he wasn’t going to get better and the pain was only going to worsen,” his wife said.

The decision to end his life immediately lifted his spirits, she said, especially as he began to plan the details of his memorial service. In the meantime, visiting friends and family delighted him with a lifetime of memories.

Then came St. Patrick’s Day, when he and his family continued the reminiscences in his den as guitar music (composed by a grandson) played gently in the background. Sitting in his favorite recliner, at 10 a.m., he was ready. He stretched his arm toward the feeding tube and squeezed a clip as his physician had instructed him. As the fatal barbiturate streamed into his body, he continued to opine over the approaching NCAA basketball tournament, and then, drifted into silence.  By the time a nurse pronounced him gone, 45 minutes had elapsed.

“It was the right thing to do,” Ethel said almost a year later. “It’s not a criminal thing. It is a beautiful way to be able to end your life. It has brought all of us even closer.”