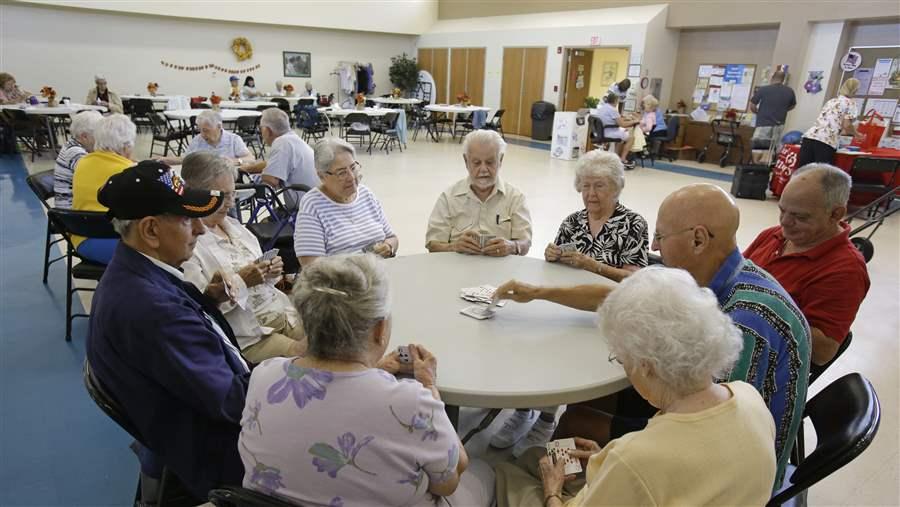 This year marks a half-century since Congress created the Older Americans Act, the major vehicle for delivering social and nutrition services to people over 60. But there’s little to celebrate on the golden anniversary of the law that helps people age at home.

Cash-strapped states and counties are hard-pressed to make up for insufficient federal funding of the act, which has limped along since its 2011 expiration without a full reauthorization.

Last year, nearly two-thirds of 391 local aging agencies reported that their Older Americans Act dollars—which provide 40 percent of the funding for the average agency—had decreased since 2011, an industry survey disclosed. Money from states was mostly down or flat, they said.

Area aging agencies warn the situation will only worsen, if current funding trends continue as the nation’s population ages.

The people most affected are those who may have modest savings but are not poor enough to qualify for Medicaid services, said Joseph L. Ruby, president and CEO of the Akron Canton Area Agency on Aging in Ohio.

Without those services, people who could live independently with some assistance in bathing, dressing, light cleaning and meals, will decline and face premature admission to nursing homes.

Nursing homes are a vastly more expensive option.  And when people exhaust their financial resources to pay for it, they end up on Medicaid.

“My biggest frustration is that we can’t help a guy who’s worked his whole life. He has a few bucks saved away,” Ruby said. “But if he ends up in a nursing home it will be gone.”

Julie Govert Walter, executive director of the North Central-Flint Hills Area Agency on Aging in Kansas, said Older Americans Act programs run through agencies like hers are the best way to achieve Medicaid and Medicare hospitalization savings. “What we are doing is all in the area of prevention,” she said.

People living at home with the help of meals and other services can pay taxes, patronize businesses and contribute to their communities through volunteerism and other activities, she said.

Ninety-two percent of home-delivered meal recipients say those programs – the biggest funded by the 1965 law—allow them to remain in their homes, according to the federal Administration for Community Living.

It’s often assumed that seniors’ needs are met by Medicaid, which serves the poorest people, and Medicare, which typically doesn’t cover the long-term personal care and nutrition provided by the Older Americans Act, said Martha Roherty, executive director of the National Association of States United for Aging and Disabilities (NASUAD).

“People think we are addressing the needs of the changing demographics. But we’re going at it in the most expensive way possible,” she said.

Effects Vary Across the States

A NASUAD analysis underscores the funding problem: While the population over 65 has increased by 60 percent since 1980, Older Americans Act allocations, when adjusted for inflation, have dropped 34 percent.  The peak funding year was 2010 at $2.1 billion, in addition to a special recession-related boost of $225 million. In the 2015 fiscal year, it was $1.9 billion.

The NASUAD survey found that even as demand for services increased, states overwhelmingly reported reducing services, serving fewer people and creating new waiting lists. The effects vary across the states.

At the North Central-Flint Hills agency in Kansas, group meals, while steady in number, are being offered at fewer centers. The agency has delayed equipment repair and replacement as it faces the cost of upgrading its kitchens to fire codes, Walter said.

Unmet needs have ripple effects. Officials with Arizona’s Adult Protective Services (APS) cite a spike in “self-neglect” cases, which have more than doubled to 4,460 since 2010, creating a significant strain on the strapped agency’s caseload.

“Most needed is personal care—bathing grooming, dressing,” said Melanie Starns, assistant director of the Arizona Department of Economic Security. “If you have serious disability ... it’s not about wanting a free maid. It’s about changing bed linens so you don’t lie in your own excrement and get bedsores.”

In one case, Adult Protective Services learned of a Phoenix-area elderly couple whose home was littered with fecal matter and vermin. APS and the local Agency on Aging arranged for exterminators, plumbing repairs, a hand-held shower, cleaning help, meal deliveries, and doctor visits to renew the man’s portable oxygen. The result: The couple avoided institutionalization, and improved their health and hygiene. The man's reliance on oxygen decreased.

But Arizona’s local aging agencies have seen their federal and state funding drop 19 percent since 2010, and the statewide waiting list for services has climbed to 2,345. That doesn’t include an unknown number of people who didn’t bother to sign up after they learned they would have a year’s wait.

In Maricopa County, home to Phoenix and the state’s most populous county with 3.8 million people, the waiting list has grown more than 800 percent in three years.

Mary Lynn Kasunic, president and CEO of the county aging agency, said that despite fewer federal dollars, the agency has been able to maintain daily deliveries of 5,000 meals to people who are homebound. But it has been able to only with private and local government support to help cover the costs of centers, where the agency serves meals to groups of seniors.