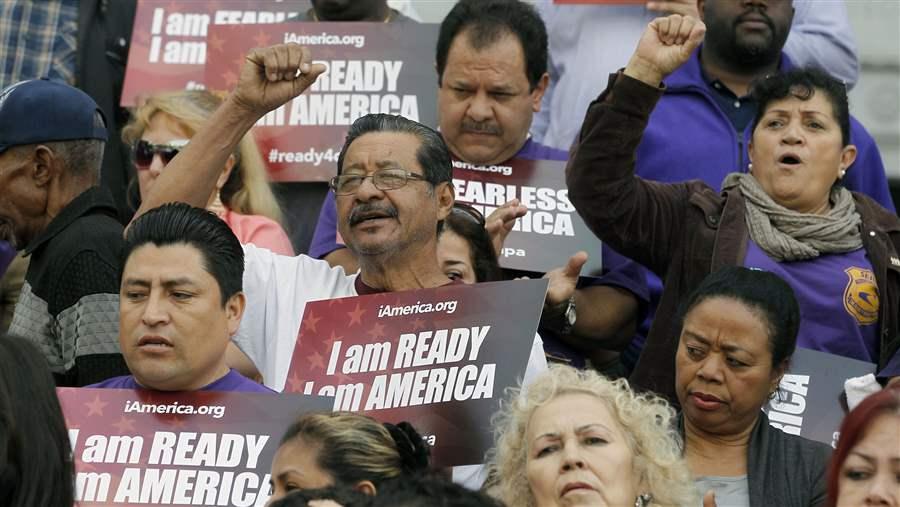 Community activists rally during an event on Deferred Action for Childhood Arrivals (DACA) and Deferred Action for Parental Accountability (DAPA), in downtown Los Angeles. For states, the controversy over deferred deportation for millions of unauthorized immigrants has raised thorny health care questions. (AP)

This story has been updated to correct the name of the National Conference of State Legislatures.

Unauthorized immigrants have limited access to health care coverage, and the president’s action likely will make them ineligible for most Medicaid services and bar them from purchasing insurance on the federal and state exchanges created under the Affordable Care Act (ACA).

Some states have sought to solve the problem for low-income immigrants with separate state-funded insurance programs. Those that have not are wrestling with the consequences of a population that is going without routine care, which can drive up costs when preventable illnesses become serious health emergencies.

Treating kidney disease as an emergency condition, for instance, costs almost five times what it would with routine care denied to unauthorized immigrants, according to a Baylor College of Medicine study published by the Texas Medical Association last year.

Unauthorized immigrants without health insurance present other problems for states. In Maryland, for instance, state attorneys face cases of criminally insane defendants who are no longer deportable but can’t get the follow-up care required for release into the community.

The issues arise from what the Annenberg Public Policy Center calls “a curious intersection” between the ACA and the president’s executive action that defers deportation for many unauthorized immigrants: The action allows them to live and work here legally, but not to get insurance under the ACA.

The action is on hold because of an injunction issued Feb. 16 by a federal judge in Texas after 26 states filed suit. The Obama administration is appealing. But even if the president wins, the health care issue likely remains for the immigrants who are allowed to stay and work.

Only states with state-funded alternatives, such as California’s Medi-Cal, are considering plans to accept expanded DACA/DAPA recipients. California, along with Washington, Massachusetts, Minnesota, New York and the District of Columbia use state or local funds to offer some health insurance to DACA recipients, according to the National Conference of State Legislatures.

Illinois was planning a state-funded insurance exchange open to all, including unauthorized immigrants, under Democratic Gov. Pat Quinn. Republican Gov. Bruce Rauner, who replaced Quinn in January, has not said whether he will continue the plan.

Many immigration and health care advocates hope the situation will change nationally, and DACA and DAPA recipients will be allowed to purchase insurance on all exchanges and be covered by employer plans under the ACA. Dozens of state and local advocacy groups have asked the federal government to open up more health insurance options for DACA and future DAPA recipients.

“There is some hope that the work authorization will allow people granted DACA or DAPA to obtain jobs that provide health insurance benefits,” Georgetown’s Health Policy Institute said. “However, many people in low-wage, part-time and seasonal jobs will continue to be left out of employer-sponsored health insurance or unable to afford their required share of the premiums.”

More than half of unauthorized immigrant adults have no health insurance, and one in five lives in poverty, according to Pew Hispanic Center estimates (Pew also funds Stateline). That creates problems, even in criminal cases.

At a meeting of the National Association of Attorneys General in Washington, D.C., this week, Assistant Attorney General Rhonda Edwards of Maryland said she’s finding it increasingly hard to deal with mental hospital inmates who are unauthorized immigrants because of their lack of insurance.

Without insurance, it’s difficult or impossible to release patients from mental hospitals and free the beds for other patients, she said.

“Treatment for mental illness is afforded to illegal mentally ill immigrants who are court-committed to state-run facilities at governmental expense,” Edwards wrote in a paper on the subject. “However, once these individuals are released, no governmental funding is allocated for their care and treatment for mental illness symptoms that may cause them to be a danger in the community.”

Unauthorized immigrants without insurance are entitled to emergency care, including childbirth care, through a federal-state Medicaid safety net fund costing $2 billion a year, according to a 2013 report from Kaiser Health News. Routine care is often left to safety net clinics that also get federal funding, but politically sensitive care like birth control can be inconsistent from state to state.

A recent University of Kentucky study found that lack of insurance drives many immigrant women to cross the border into Mexico to get oral contraceptives.

The issue of health insurance came up in arguments before U.S. District Court Judge Andrew Hanen, who issued the injunction which blocked DAPA and the expansion of DACA.

States argued that DACA and DAPA recipients would have an unfair advantage over citizens in competing for jobs because employers wouldn’t have to buy insurance for them.

Expanding deferred deportation could “create a discriminatory employment environment that will encourage employers to hire DAPA beneficiaries instead of those with lawful permanent status in the United States,” Hanen wrote in a memorandum opinion in issuing the injunction. “If an employer hires a DACA beneficiary, it does not have to offer that individual healthcare nor does it incur a monetary penalty for the failure to do so.”

But employment experts said such a tactic is not as easy as it sounds. Any employer of more than 50 people must provide health insurance for all employees unless every single one is exempt, said Ken Jacobs of the University of California, Berkeley Labor Center.

“There is a penalty that applies to employers that do not provide affordable coverage,” Jacobs said. “That rule applies to all workers.”

Angel Padilla, a health policy analyst at National Immigration Law Center, agreed. He pointed to a brief released in December by the Annenberg Public Policy Center debunking the idea.

"It would be extremely unlikely for DACA and DAPA grantees to allow an employer to skirt the employer mandate and there are a number of existing protections to keep this from happening,” he said.

States Can Step In

States have always been free to make their own health care provisions for unauthorized and other immigrants, who are generally barred from government health benefits such as Medicaid for five years after they attain legal status.

Several states, such as Alaska and Massachusetts, provide state funding for selected unauthorized immigrants (such as children and pregnant women) for some services, according to a Pew report released last year. But other states, such as Alabama, Mississippi, North Dakota, Ohio, Texas, Virginia and Wyoming, deny Medicaid even to some immigrants with green cards who have been legal for five years.

Many states are opposed to providing help to unauthorized immigrants on ethical and financial grounds. Foes say it’s wrong to reward illegal entry into the country, and that more demand on health care resources will strain budgets and harm the quality of care. Opinion polls often favor withholding health care subsidies from illegal immigrants, according to a review by the Federation for American Immigration Reform (FAIR), a group seeking to stop illegal immigration.

But without affordable health insurance, advocates say unauthorized immigrants will continue to have health issues.