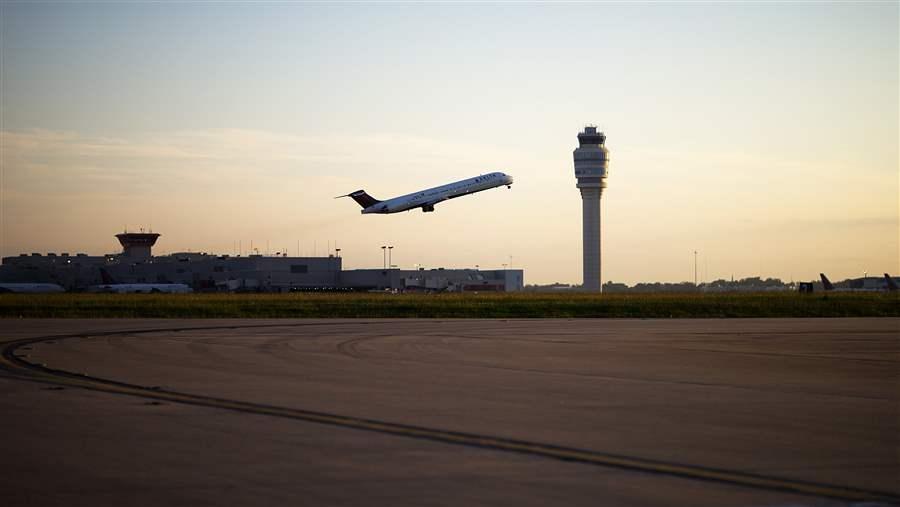 An airplane takes off in front of the control tower at Hartsfield-Jackson International Airport in Atlanta, named the busiest U.S. airport in 2015. Georgia says an FAA rule requiring revenue from jet fuel taxes to be spent only on air travel-related expenses is unconstitutional and unfair. (AP)

Certain states and localities with airports could lose about $200 million annually unless they comply with a 2014 Federal Aviation Administration ruling requiring them to spend revenues from jet fuel taxes only on air travel-related expenses.

At issue is a new interpretation of the Airport and Airway Improvement Act. According to the FAA, the 1982 law was supposed to ensure that taxes levied on airline fuel are spent to upgrade airports, help build runways and improve facilities for air travelers.

But some state and local governments had been interpreting the law differently. They concluded that if an airport was managed by an independent airport authority instead of by a state or locality, the state or locality could spend the fuel-tax revenue however it wanted.

Two years ago, the FAA discovered that some jurisdictions were using the revenue for other than air travel purposes. The agency reviewed the law and decided to release a re-interpretation in 2014. That new rule reinforced the requirement that states and localities use the fuel-tax revenue for air travel-related expenses, and gave jurisdictions until December to draft an action plan and until December 2017 to comply.

California, which could lose the most, by some estimates up to $100 million a year in state and local tax revenue, is just starting to try to figure out what the rule means and how to comply, according to H.D. Palmer, spokesman for the California Department of Finance.

Palmer said the state currently taxes 1.2 billion gallons of jet fuel a year at 2-cents a gallon. While predicting jet fuel prices is difficult, he said, the state’s general fund could lose close to $10 million a year if it does not comply with the FAA ruling.

The  impact could be up to $100 million when the other sales taxes assessed by the state on all fuels, along with sales taxes imposed by local jurisdictions, are counted. “What I can tell you is that we have to have a plan submitted on how we intend to comply,” he said.

California jurisdictions that could lose significant revenue include San Mateo County, Los Angeles County and San Francisco, all of which have major airports.

Georgia, Michigan, Illinois, New York, New Jersey, and the cities of Boston and Chicago also could lose revenue, according to the airline tax policy group 12billion.org, a project of the Unite Here labor union, which represents unionized airline workers and others. 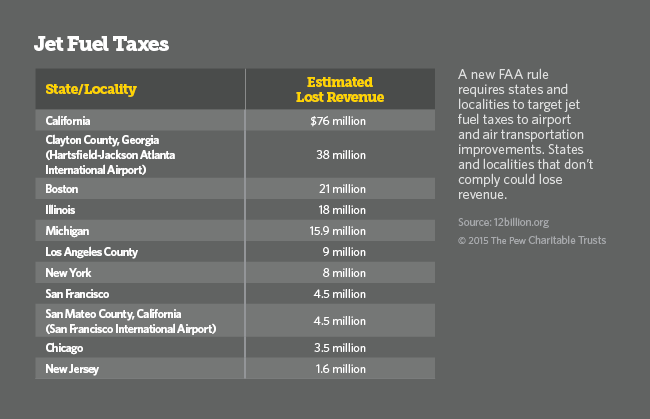 In all, the jurisdictions could lose $200 million a year unless they comply, the organization estimated.

The choice the states and localities have is stark: They can figure out how to comply with the rule and use the fuel-tax revenue only for airport and air travel-related items, or they can eliminate the tax and lose the revenue.

“If this rule goes unchallenged and states eliminate (fuel) taxes, airline record profits could soar even higher while a lot of state and local governments are still struggling to make ends meet,” said Adam Yalowitz, research analyst for Unite Here.

Georgia, which could lose $38 million annually, challenged the rule. It told the FAA that states and localities have a constitutional right to decide how to spend their tax revenue under the federal Airport and Airway Improvement Act.

“We respectfully disagree with the FAA’s interpretation,” Georgia Senior Assistant Attorney General Alex Sponseller wrote. The purpose of the law is to regulate and fund airports and airport authorities, he wrote, and not to “interfere” with a state’s taxing power or penalize state and local entities.

The FAA is unsympathetic. “They will have to initiate a process to amend any noncompliant laws and ordinances to ensure that taxes on aviation fuel are expended for airport purposes,” said FAA spokeswoman Marcia Alexander-Adams. She said the agency is “working on our response to Georgia” specifically, but that the rule still holds.

Sponseller said a good example of the problem with the rule is Hartsfield-Jackson Atlanta International Airport. Jet fuel there is taxed at a 3 percent sales tax rate for the state. It also is subject to the local sales tax and an education sales tax from Clayton County, where part of the airport is located. But neither the state nor the county run the airport. It is run by the City of Atlanta.

The rule, Sponseller argued, amounts to the federal government telling a state what to do with the money raised from the jet fuel while it has no control over the airport.

Delta Air Lines, among the heaviest users of the Atlanta airport, enthusiastically supported the FAA’s decision to enforce the tax rule. In  comments to the FAA, Delta said not requiring proceeds from the state tax on fuel to go for aviation use would “undermine the purpose and effect of the statutes and would be inconsistent with congressional intent.”

The Airports Council International-North America, an industry group representing governing bodies that own and operate commercial airports in the U.S. and Canada, also weighed in on the rule. It persuaded the FAA to modify at least one part of their regulation, which initially required airport authorities to be responsible for forcing states and localities to direct jet fuel tax revenues to airports.

“The FAA removed that provision from the policy,” said Tom Devine, the group’s general counsel. “We were glad they did. As political subdivisions of states, airport authorities are not in any position to tell states what to do.”

Under the modified rule, all airport authorities have to do is inform states and localities of the law and try to convince them to comply, “which is something we can live with,” Devine said, rather than be an enforcement arm. The FAA has authority to enforce the act.

The Airports Council has long maintained that the nation’s airports are in dire need of upgrading and repairs. In a 2013 study, the council said the total estimate of airports’ capital development needs for 2013 through 2017, adjusted for inflation, is $71.3 billion.

The group’s report said 54 percent of that development is needed to accommodate growth in passenger and cargo activity and 43 percent is needed to upgrade current infrastructure. The group also called for increasing local user fees to fund airport needs.

But the organization also maintained, it its initial filing with the FAA that, in its opinion, the FAA rule “impermissibly interferes with fundamental state taxing and spending powers.”