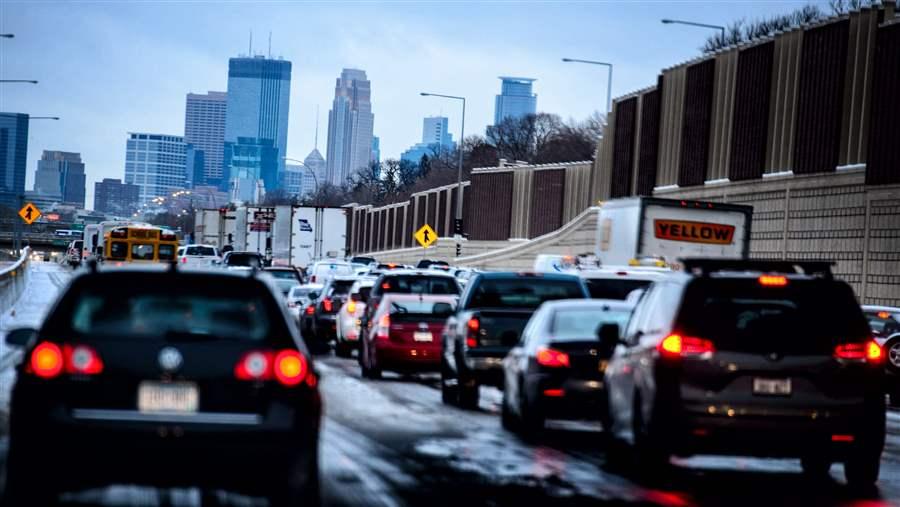 Traffic crawls into downtown Minneapolis. State legislators in Minnesota and other states are working on ways to better identify residents who drive without auto insurance. (AP)

In 49 states and the District of Columbia, it’s against the law to drive without car insurance. Nevertheless, more than 12 percent of all U.S. drivers are uninsured.

In 2012, the most recent year for which statistics are available, uninsured motorist claims totaled $2.6 billion, a 75 percent increase from the previous decade, according to a recent report by the Insurance Research Council (IRC). Those costs, largely borne by insurance companies, are passed on to insured drivers in the form of higher premiums.

States have tried a variety of ways to get motorists to buy car insurance. Some states require drivers registering their cars to show proof of insurance. In many states, uninsured drivers face stiff fines, but some of the states that have such penalties on the books often fail to enforce them. Furthermore, researchers have found that states with stiffer penalties, which can range from a maximum of $200 for a first offense in California to up to $1,500 for a first offense in New York, do not necessarily have the lowest uninsured rates.

Patrick Schmid, the IRC’s director of research, cited a variety of possible reasons for the apparent ineffectiveness of the penalties. “If the uninsured don’t know the penalties are harsh, how would the penalty sway them?” Schmid said. “Alternatively, perhaps some states with harsh penalties installed them because they already had high rates of uninsured motorists.”

In some cases, states don’t have the resources to implement the mandates, according to a study by the Financial Responsibility & Insurance Committee, a working group of the American Association of Motor Vehicle Administrators (AAMVA).

Ten states (Alaska, California, Iowa, Kansas, Louisiana, Michigan, New Jersey, North Dakota, Oklahoma and Oregon) have “no pay, no play” laws that limit an uninsured driver’s ability to claim damages if he or she is in an accident with an insured motorist. But the IRC found that “no pay” laws had only a modest effect on uninsured rates, reducing them an average of 1.6 percent.

Other states require insurers to provide data on all insured drivers, so that the state can match registered cars with insurance policies. But that strategy tends to produce numerous errors, resulting in law-abiding drivers being flagged for not having insurance.

In 2012, the American Civil Liberties Union challenged a 2010 Indiana law that allowed the state to randomly target drivers who had previously driven without insurance and require them to provide proof of insurance or face suspension of their license. The case was brought to court after a mother of six had her license suspended when she could not prove that she had insurance, even though she did not have a car. The state’s Bureau of Motor Vehicles eventually reinstated the licenses of 4,000 drivers.

“There are all kinds of schemes out there” to get drivers to comply with state insurance laws, said Mike Chaney, the Mississippi Insurance Commissioner. “But they haven’t found one that works.”

There is no “typical” uninsured driver. Some don’t have car insurance because they resent the requirement—“Live Free or Die” New Hampshire is the only state that does not mandate it. Others don’t have it because they are undocumented immigrants who lack driver’s licenses, which are needed to get insurance in many states.

Most of the uninsured, however, don’t purchase car insurance because they can’t afford it. The number of uninsured drivers peaked at 29.9 million in 2009 during the Great Recession and then dropped to 29.7 million in 2012, the last year for which data are available.

Car insurance rates have risen more slowly than other expenses in recent years, but insurance ranks below necessities such as food and housing for drivers struggling to make ends meet.

“It’s not a racial or immigrant issue,” Chaney of Mississippi said. “It’s an issue that people cannot afford to pay the money upfront. That’s also true for health insurance, which tends to go hand-in-hand (with car insurance).”

“When you have a large Medicaid population, you have an increase in the number of folks who are living on the edge. They have to make choices about grocery money, buying a car, paying the light bill or paying the rent.”

Uninsured rates vary greatly from state to state, but they tend to be highest in states with high poverty rates.

But there is not always a strict correlation between poverty and the uninsured rate. Louisiana, which has the third highest poverty rate in the country, at 19.8 percent, has an uninsured rate of 13.9 percent, only slightly above the national average and considerably lower than its neighbor, Mississippi. Louisiana’s “pay or play” law might have helped keep the uninsured rate down, Chaney suggested.

California, which has more licensed drivers than any other state, also has the highest number of uninsured motorists—between 3.6 million and 4.1 million, or 14.7 percent. (Its poverty rate is 16.8 percent.) The state has tried since the 1990s to entice motorists to sign up for insurance with the nation’s only state-run program for low-income motorists. But relatively few low-income drivers have taken advantage of the program. The average Californian pays $1,962 per year in auto insurance.

Last week, California Insurance Commissioner Dave Jones announced that his department would step up its recruitment efforts, as the state prepares to offer new licenses to nearly 2 million undocumented immigrants who were previously barred from getting licensed. This year, new motorists signing up for driver’s licenses under the “Safe and Responsible Driver’s Act,” or “AB60,” will be handed a fact sheet advising them that auto insurance is mandatory in the state.

(This week’s injunction blocking President Barack Obama’s executive actions on immigration will not affect implementation of the California law, according to a staff member with the California State Assembly.)

“We want everyone to have auto insurance,” Jones said. “It helps the individuals who are driving and provides protection for their families. But it also helps those who might be in an accident with them.”