Demonstrators hoping to draw attention to the subprime mortgage crisis in Philadelphia in 2008. Earlier this month, 19 states plus the District of Columbia reached a settlement with Standard & Poor’s over allegations that the credit ratings agency misled investors in rating mortgage-backed securities in the lead-up to the 2008 financial crisis. (AP)

Connecticut soon will get $36 million of a $1.37 billion legal settlement with Standard & Poor’s, resolving allegations that the credit ratings agency misled investors in rating mortgage-backed securities in the lead-up to the 2008 financial crisis.

Connecticut initiated the legal action against S&P, but it isn’t the only state to get settlement money. Eighteen other states and the District of Columbia, which joined with Connecticut and the U.S. Justice Department in the civil litigation, will get shares that will go to their general funds, pension systems and state programs.

In many of the states, attorneys general will get to keep some of the money to finance other investigations and lawsuits when they suspect laws have been broken, or consumers or taxpayers have been harmed.

The S&P case illustrates the role attorneys general play in bringing civil suits or criminal complaints, why they bring them and what they seek in pursuing the cases. And it’s instructive in showing what happens to the money they win in damage awards or in settlements.

After that, he said, the goals are to try to recover ill-gotten gains to repay victims, to punish bad behavior and to try to deter similar unlawful activity in the future.

“Paying out (damages) hurts them and helps create a deterrence,” said Tierney, a former Maine attorney general. “And it hopefully goes back to aggrieved parties.”

Last month alone, they brought nearly four dozen cases individually or in conjunction with their colleagues in other states, according to a compilation by the National State Attorneys General Program.

Perhaps the most famous of multistate lawsuits was against the tobacco industry, brought by 46 states, which alleged the industry deceptively marketed cigarettes knowing their hazards. It was settled in 1998 and guaranteed annual payments to the states in perpetuity to fund anti-smoking campaigns and pay for public health costs tied to smoking.

In February 2012, all 50 states participated with the federal government in a $25 billion settlement with five of the nation’s largest mortgage service companies and banks over abuses and fraud in home foreclosures and mortgage servicing practices following the housing collapse.

Most of the mortgage settlement money was distributed among the states to help individual homeowners hang onto their homes. But some was set aside with the National Association of Attorneys General (NAAG) to provide $10 million in a fund that attorneys general could tap to help finance the investigation and litigation.

The idea is that when attorneys general tap the fund, they commit to paying it back if their cases are successful and they can, said Chris Toth, NAAG’s deputy executive director. 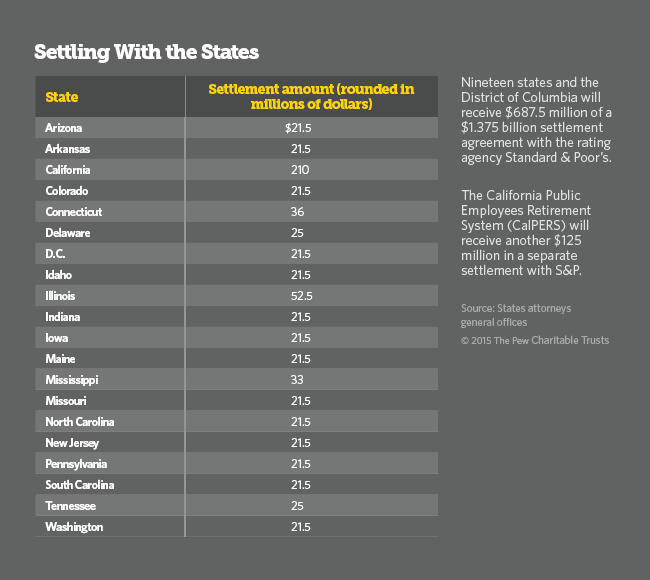 The S&P settlement announced Feb. 3 is an outgrowth of action Connecticut originated in 2010 after suspecting that the world’s largest financial services ratings agency rigged the risk ratings it gave to some structured financial securities, including chancy subprime mortgage-backed bonds.

The bonds’ collapse helped trigger the 2008 global financial meltdown that sank equity markets, drove financial firms into bankruptcy, forced the U.S. government to bail out banks and exacerbated economic conditions in the U.S., which already had entered a recession.

“The whole world economy was damaged by what they (S&P) did,” said Connecticut Attorney General George Jepsen, a Democrat. “Connecticut was damaged like everyone else. Connecticut’s citizens had their 401ks blown up, their pensions blown up.”

Several pension and hedge funds that had bought the securities had unsuccessfully sued S&P for its ratings, alleging the agency was negligent in making them and that they deceived investors. Their suits were dismissed after S&P had argued its ratings were opinions, not fraud, and thus protected by the First Amendment.

But the Connecticut attorney general's office thought differently. It alleged that in the run-up to the subprime meltdown, S&P had inflated its ratings to satisfy the investment houses that sold the securities and which were paying S&P to rate them.

In other words, the ratings agency was systematically making money by misrepresenting the credit worthiness of the bonds, in violation of the unfair trade practices law. Jepsen said his office had the evidence to prove it.

Mississippi signed onto the Connecticut action in 2011. Illinois followed. And in late 2012, Jepsen and attorneys in his office, along with those from attorneys general offices in 30 states, met in Washington with Justice Department officials, who signed onto Connecticut’s legal argument.

Where the Money Goes

Attorneys general usually keep some settlement money to cover the costs of cases and to help finance future litigation. But distribution of damage recoveries or awards can be set by law, such as reimbursing Medicaid for fraud.

Half the S&P settlement, $687.5 million, will go to the federal government as a penalty. The other half was divided among the states and the District, based on their damages and costs in litigating.

Some states will pay back parties directly damaged by the ratings agency’s practices. That’s the first rule of thumb in distributing money: Try to compensate damaged parties even if you cannot make them whole.

California, for instance, will send $176 million of its $210 million share to the California Public Employees’ Retirement System (CalPERS), which had invested in some of the toxic securities. CalPERS also will get another $125 million from the settlement of its separate suit against S&P.

Washington state will use $3 million of its $21.5 million share to help victims of the mortgage crisis. The bulk, $18 million, will go to the state’s general fund. Democratic Attorney General Bob Ferguson’s office said that S&P’s actions harmed Washington’s economy and ultimately cost the state tax revenue.

Missouri will put its $21.5 million in the state general fund for legislators to decide how to spend it. The legislatures in Colorado, Delaware and Idaho, along with the District city council, will largely determine how their shares will be disbursed.

Other states will allocate their money in a variety of ways:

In many states, attorneys general have some say in where the money goes, though legislatures often have final word when it’s not earmarked by law or when it’s impractical to identify and reimburse damaged parties.

In Arizona, Republican Attorney General Mark Brnovich’s office said that he, Republican Gov. Doug Ducey and legislative leaders will figure out how to distribute the state’s $21.5 million share among children, family, seniors and public safety programs.

In North Carolina, Democratic Attorney General Roy Cooper’s office said most of the state’s $21.5 million share will go to schools. But he’s asking that some go to college scholarships for students who stay in the state to teach and to retain scientists at the state’s crime lab.

When big money is available and there’s wide discretion on its use, problems can arise. How some states handled tobacco settlement money is a prime example.

Seeing a long stream of revenue coming from the tobacco companies, more than $200 billion in the first 25 years of the settlement, several states opted to swap their annual payments for money upfront. They issued bonds for instant cash, using future payments as collateral. And some of those bonds are now coming back to bite them.

An analysis of more than 100 such deals by ProPublica, the nonprofit investigative journalism enterprise, last year found that some bonds are in trouble because annual settlement payments to the states are less than anticipated because fewer people are smoking.

Less tobacco money threatens promised payments to investors and many of the bonds contain huge balloon payments—all of which is threatening states’ credit ratings. Lower credit ratings can increase the states’ costs of other borrowing.