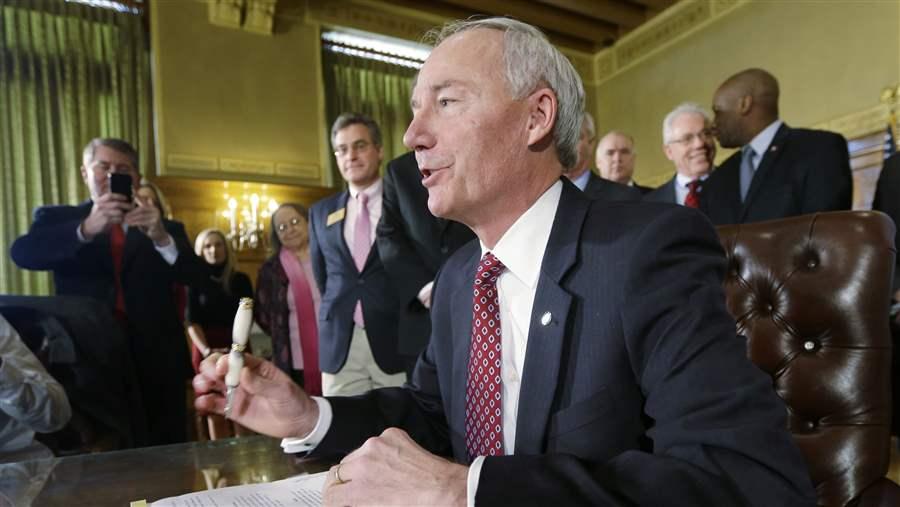 Red and blue states are poles apart on just about every issue. But governors and state lawmakers from both parties are speaking the same language when it comes to offering tax cuts and credits for low- and middle-income Americans.

The actual plans taking shape are different depending on which party is in charge at the statehouse. What they have in common is a strain of populism and the stated goal of helping those who feel they’ve been left behind during the economic recovery.

Proposals in Republican-dominated states, such as Arkansas, Ohio and Maine (where Democrats control the House), focus on lowering income tax rates, either for everybody or specifically for low- and middle-income taxpayers.  In New York and Minnesota, where Democrats hold more sway, the idea is to boost low- and middle-income households through targeted property tax cuts or child care income tax credits, respectively.

Some states, including some with Republican governors such as Michigan and Massachusetts, are interested in expanding their states’ versions of the federal Earned Income Tax Credit (EITC). Other states that don’t have a state EITC, such as California, are thinking of creating one. The credit, which reduces the amount of taxes that low- to moderate-income households owe, has long attracted bipartisan support.

The proposals come amid a growing national conversation on economic inequality.

“There are a lot of folks across the states who are very aware of the widening gap,” said Erica Williams of the Washington-based Center on Budget and Policy Priorities. The left-leaning group has criticized income tax cuts as a poor strategy for helping the poor, but Williams said “it’s good that lawmakers in the states, and maybe in some less typical states, are looking at how do we help folks in the low end of the income spectrum. But there are questions of whether some of these proposals really do that.”

Peter Wehner of the Ethics and Public Policy Center, who has served in the last three Republican presidential administrations, recently laid out the conservative case for addressing middle-class anxieties in Room to Grow: Conservative Reforms for a Limited Government and a Thriving Middle Class, a collection essays published last year.

“The chief fear of middle-class Americans is that just as it is getting harder for poor people to climb into the middle class, a stagnant economy is making it all too easy for those who have achieved middle-class status to fall out of it,” Wehner wrote. “Conservatives must understand the concerns of the middle class and speak to their aspirations and worries.”

State revenues are expected to total $748.3 billion in fiscal 2015. That is about 3 percent more than the $726.1 billion states collected in fiscal 2014. But when those figures are adjusted for inflation, revenues are still 2 percent lower than they were at their peak before the recession.

Because budgets remain relatively tight, some governors who want to cut income taxes for low- and middle-income households are proposing tax hikes in other areas to make up the difference. That trade-off is sparking some resistance from members of both parties.

In Ohio, where Republicans control the governor’s office and both chambers of the legislature, Gov. John Kasich has proposed a 23 percent cut to all income taxes over the next two years and the expansion of an income tax exemption that might spare 200,000 low- and middle-income Ohio households from paying any state income taxes.

“Ohio is beginning to give the people at the bottom the kind of relief they need and the incentives to work more,” Kasich said at an event last month, pointing to his latest tax-cut proposal in addition to an expansion of the state’s EITC he signed into law last year.

But to pay for the cut, Kasich has proposed a raft of tax increases: higher tobacco levies, higher taxes on the state’s oil and gas industry and higher sales taxes, among other changes. The plan is similar to “pro-growth” tax cuts proposed by Republicans elsewhere, in the name of stoking economic activity. Still, the reaction from Kasich’s GOP counterparts in the legislature has been skeptical.

Republicans in the Ohio House had tough questions for the governor’s budget director in a hearing earlier this month, expressing worry that the proposed tax hikes would dampen economic activity. They also said they were concerned that increasing levies on fracking would exacerbate the problems the industry already is facing because of falling oil prices. Republicans have promised to consider Kasich’s plan, but some are already drawing parallels to 2013, when a similar tax plan failed to pass in the legislature.

Democrats were no more receptive. State Rep. Denise Driehaus, who is the ranking minority member on the Finance Committee, pointed out that the sales tax is a regressive tax that hits rich and poor equally, while income-tax brackets are based on a household’s annual earnings, with the rich paying a greater percentage. “It’s disingenuous to suggest that the middle class benefits from this,” Driehaus said.

A similar dynamic could play out in Maine, where Republican Gov. Paul LePage has proposed a significant shift away from the state’s income tax (with the eventual goal of eliminating it entirely) toward more taxes on sales and services, which he says would spare state residents while reaping revenue from tourists. LePage’s plan would offer tax credits to low-income earners to help offset the higher sales tax burden, along with property tax relief for low-income earners.

The reaction so far in Maine has been more reserved than in Ohio. Yet some are already pointing out that voters there rejected a plan to shift from income to sales taxes in 2010, and like elsewhere, it’s been derided as a regressive tax plan overall. Democratic House Majority Leader Jeff McCabe said there are also worries that the plan could lead to property tax hikes around the state, squeezing middle-class homeowners even more.

For now, McCabe called the plan a “very bold proposal,” and a “great place to start.” But he asked: “Is this really going to help build the middle class?”

“We still have a lot of listening to do,” he added.

There were no such problems in pushing through tax cuts in Republican-controlled Arkansas. On Feb. 6, the state’s new Republican Gov. Asa Hutchinson signed a $100 million tax cut into law, after the bill sailed through the legislature, garnering huge bipartisan support along the way.

“This is an encouraging first step in making Arkansas’s income tax rates more competitive with surrounding states,” Hutchinson said in a statement after the bill passed. “Arkansas has been an island of high taxation for too long, and I’m pleased that we are doing something about that.”

The cut amounts to a 1 percent reduction in income tax rates for middle-income earners.  In recent years, Minnesota has enacted across-the-board income tax cuts and cuts in taxes on manufacturers that some saw as too heavily weighted toward the wealthy.

This time, lawmakers were able to find common ground on offering relief specifically for the middle class.

“Democrats wanted to say on the lower side, and a lot of the Republicans wanted to stay on the higher side,” said state Rep. Joe Jett, a Democrat who helped usher the bill through the legislature. Eventually the two parties settled on a cut that will reach a half-million taxpayers. Finding the right approach to specifically help middle-class taxpayers in the state, he added, was the key in getting the plan passed with such ease.

“It was the sweet spot,” he said. “This is just one of those things that the stars kind of lined up.”

In New York, Democratic Gov. Andrew Cuomo last month unveiled an “Opportunity Agenda” he said would produce economic benefits throughout the state. To offer specific help to low- and middle-income New Yorkers, the governor made a stab at relieving pressure from the state’s notoriously heavy property taxes.

Cuomo’s plan would provide $1.7 billion in property tax relief for households earning less than $250,000 a year, saving 1.3 million New Yorkers an average of $1,000 per year, according to the governor. That would be paired with an income tax credit for renters earning up to $150,000 each year. The renters’ credit would be worth an average of $400 annually.

The plan may face opposition in the Republican Senate. The state GOP wasted no time blasting the plan as not doing enough to relieve local governments of burdensome state mandates, which they called the source of high property taxes. The credit, Republicans said, was the same as “putting a Band-Aid on a bullet hole.”

In Minnesota, another Democratic governor’s proposal is receiving a warmer bipartisan welcome. Gov. Mark Dayton has proposed spending $100 million of his state’s $1 billion-plus surplus on a child care tax credit, which his office said could help 130,000 families save more than $400 a year.

But Republicans took over control of the Minnesota House in January, so there is some skepticism about whether Dayton’s expensive credit plan will pass. Democratic Sen. Ann Rest, chair of a tax reform panel, said she expected the proposal would figure into broader discussions about what to do with the state’s surplus as the session wore on, but she wasn’t sure what form it might eventually take.

Nevertheless, Dayton’s proposal got a notably warm reception from the Republican chairman of the House Tax Committee.

“I’m all about giving it back to the folks, and that meets my criteria,” state Rep. Greg Davids said. “My goal is to work with the (Democratic) Senate and the governor’s office. And so far, so good.”