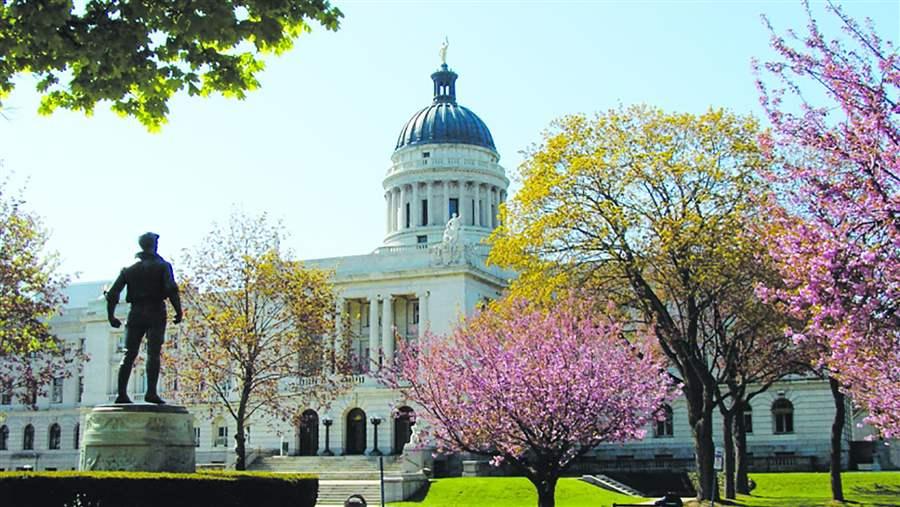 Det. Daryl Bagnuolo, of the Bergen County (New Jersey) Sheriff’s Office, thought it was strange when a local resident complained last year about a disturbing call his friend had received. The friend had been warned that he’d be arrested for failing to appear for jury duty unless he paid a hefty fine.

The caller identified himself as “Major Paul Stevens” from the Bergen County Sheriff’s Office—a person who does not exist.

Bagnuolo had no idea that the investigation he ended up launching would uncover a jury duty phone scam run out of a Georgia prison that targeted victims in at least a dozen states.

The jury duty scheme is just one variation of court-connected scams that have been cropping up in many states in the last few years. As the schemes become more numerous and sophisticated, state and local court officials are increasingly frustrated by the fraudsters and worried about how they are tainting the judicial system’s reputation.

“These pseudo-court scams have been an increasing problem,” said Susan Grant, director of consumer protection for the Consumer Federation of America. “The common thread is always the same. There is some court-related action that is imminent. You’re in trouble. You can resolve the issue by sending money somewhere.”

Often, the con artist poses as a court official or police officer or sends an official-looking email with a fancy emblem that looks real. In Arizona, one man tried to pull off the con last month by knocking on doors, claiming to be a court representative.

Court officials routinely send out media releases warning about the scams, post alerts on social media and refer victims to police. They concede there’s not a lot more they can do.

“We would love to be able to catch these people,” said Ranae Johnson, jury commissioner in Bonneville County, Idaho. “But it’s hard to stop them.”

Scams involving the courts or justice system are particularly effective because most people are law-abiding citizens and want to do the right thing, officials say.

“It plays on the average person’s need to follow the directive of the courts,” said Beverly Kraft, spokesperson for the Mississippi Administrative Office of Courts. “To have this happen, it potentially erodes public trust in the institution of the courts.”

In one of the most common schemes, the con artist calls the victim, purporting to be a cop or court official. The fraudster typically tells the victim that he has missed jury service, and a warrant has been issued for his arrest. To avoid that, he can pay a fine immediately for hundreds of dollars, sometimes more. The victim is instructed to buy a prepaid reloadable debit card, which is sold at convenience stores, pharmacies and other retailers, and then read the PIN number over the phone. The cards give instant access to cash.

Sometimes, the fraudsters will ask the victim for personal information, such as bank account, credit card or Social Security numbers.

Scammers usually use prepaid phones or caller ID “spoofing,” which makes it appear as though the call is coming from a local law enforcement agency or court office. Some leave a phone number, so that when the victim calls back, he’ll hear a phony recording that sounds similar to the real one at the courthouse or police station.

Court officials say they are concerned that the schemes, especially those focused on jury duty, are making it harder to pitch the benefits and importance of jury service.

“We want people to think of jury service in favorable terms, and this certainly doesn’t help with that,” said Greg Hurley, an analyst for the National Center for State Courts.

Court officials say that while it is illegal in many states not to show up for jury duty, they would never call someone or send an email demanding payment of a fine. Instead, courts often mail a letter asking the person to reschedule or appear before a judge to explain the absence. Sometimes, sheriff’s deputies will hand-deliver a summons.

“We don’t want people to think we would solicit money for not showing up for jury duty,” said Patty Baker, the Cherokee County clerk of courts in Canton, Georgia. “There are sanctions if you don’t show up. But it’s something the judge would impose in person.”

A growing number of court systems and police agencies have been contacted about court-related scams by local residents.

In Anoka County, Minnesota, for example, the sheriff’s office has received about two dozen court-related scam complaints over the past four months, according to crime prevention specialist Laura Landes. The most recent victim was a 30-year-old woman who lost $490 in January.

In Alabama, Attorney General Luther Strange issued an alert in December, warning that court clerks in nine counties had reported recent incidents of jury duty scams. Fraudsters, he wrote, were “growing more and more sophisticated in their efforts to trick people.”

Some fraudsters warn the victim that he has an outstanding warrant or missed a court date. Or they send an official-looking email saying that a court summons has been issued or a hearing scheduled and that the person must click on an attachment to get more information. Doing so can download malware remotely or reveal personal information on the computer.

In Hawaii, one woman fell for a scam in which she received an eviction email that warned her to vacate her property immediately. When she clicked on a link, her computer system crashed, said Tammy Mori, spokesperson for the Hawaii State Judiciary.

Typically, victims who fall for court-related scams lose hundreds of dollars. But sometimes, they’re cheated out of a lot more. In September, a 70-year-old Vancouver, Washington, man handed over $10,000 in a jury duty con after getting a call from someone who claimed to be a police officer. And last fall, a Sierra Vista, Arizona, woman in her 80s was swindled out of $6,500 after paying $4,500 and then another $2,000 for “computer processing fees.”

While many who fall prey to these schemes are seniors, officials warn that this type of crime doesn’t just affect the elderly.

“I’ve heard from people of all ages,” Idaho jury commissioner Johnson said. “These people are really scared and wonder what the heck is going on. The scammers make it sound like they’re really legitimate. They just pick people at random.”

Law enforcement officials say it’s difficult to catch fraudsters who run court-related scams because the investigations are often intricate and time-consuming and the perpetrators frequently operate from another state.

Bergen County’s Bagnuolo said he was fortunate that his sheriff’s department gave him the time and resources to spend three months probing the Georgia-based jury duty scam.

Bagnuolo, who is now a sergeant, got the phone number of the scammer from one of the victims. He decided to pose as a victim himself and called the scammer, listening to the bogus explanation. “His spiel was very professional and sounded like he was reading a script,” he recalled.

When Bagnuolo told the fraudster that he was impersonating a law enforcement officer and was going to be arrested, he said the man swore at him and laughed, saying that he was calling from a prepaid phone and would continue to scam people.

But Bagnuolo was persistent. He eventually traced the prepaid money cards purchased by a New Jersey victim to an account in Georgia, and subpoenaed phone records. His investigation revealed that the scam was being run by a gang out of a state prison, and that victims were being contacted in at least 11 other states.

In May, a corrections officer at a private Georgia prison, who allegedly acted as a middleman, and her boyfriend, an inmate at another prison in the state, were arrested in the scheme. Both have been extradited to New Jersey and are awaiting trial.

While Bagnuolo’s part of the investigation is over, Georgia law enforcement officials say their probe is ongoing.