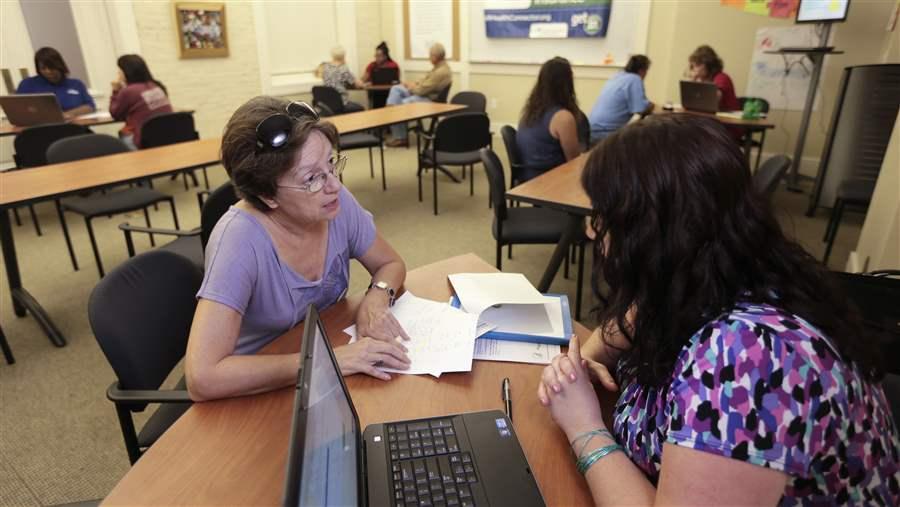 Anne Lyon of Cabot, Arkansas, left, talks with Brandi Hawkins about different types of health insurance options at the University of Arkansas. Because Arkansas does not have its own state health insurance exchange, as many as 95,000 residents could lose tax credits if the Supreme Court rules against the Obama administration. (AP)

This story was updated to correct the income eligibility requirements for subsidized insurance on the exchanges. The tax credits are available to people with incomes between 100 percent and 400 percent of the federal poverty level. For a family of four, the eligible income range is between $23,850 and $95,400.

If the U.S. Supreme Court strikes down tax credits for people buying health insurance on the federal exchange, about 8.2 million Americans in 34 states could lose their coverage under the Affordable Care Act. Most of the people likely to be affected are white, employed, and low- to middle-class. They also are concentrated in a single region of the country: the South.

Health insurance rates in those states are expected to rise by as much as 35 percent, which may make coverage unaffordable even for those who don’t qualify for tax credits. Some believe that if the tax credits are disallowed by the Supreme Court, the underpinnings of President Barack Obama’s signature health care law would collapse.

“It will be a horror movie if (the credits are struck down),” said Georges Benjamin, executive director of the American Public Health Association, which supported passage of the ACA.

At issue in King v. Burwell, scheduled for oral arguments next month, is whether people in states that use the federal government’s exchange (Healthcare.gov) to buy insurance are eligible for federal subsidies in the form of tax credits to help them pay their premiums.

The case hinges on the fact that the ACA provision governing tax credits refers to people enrolled “through an Exchange established by the State,” without mentioning the federal exchange. The ACA anticipated that all states would create their own state exchanges, but it allowed states that did not want to set up their own exchanges to use the federal one instead.

The lawsuit originated at a 2010 meeting of conservative lawyers convened by the American Enterprise Institute to explore “legal vulnerabilities” in the ACA. After the lawyers identified the tax credit as a promising point of attack, a related right-leaning group, the Competitive Enterprise Institute (CEI), found four Virginia plaintiffs to launch the lawsuits (King v. Burwell consolidated them). According to its website, CEI is coordinating and financing the legal effort.

Opponents—including the drafters of the original law, 21 states and the District of Columbia—say that whatever the exact language of the statute, Congress did not intend to make any distinction between federal and state exchanges when it came to tax credits. When questions were raised about the language, the IRS announced in 2011 it would issue the credits in states with federal exchanges, too.

In the 34 states where people use the federal exchange, an estimated 9.3 million people are expected to receive $36.1 billion in tax subsidies in 2016. A recent analysis by the Robert Wood Johnson Foundation and the Urban Institute estimated that if the Supreme Court blocked these subsidies, 8.2 million of these residents would not be able to find affordable health insurance in 2016.

“(A King win) disenfranchises millions of Americans from affordable health coverage, most of them working people,” said Trish Riley, executive director of the National Academy for State Health Policy. 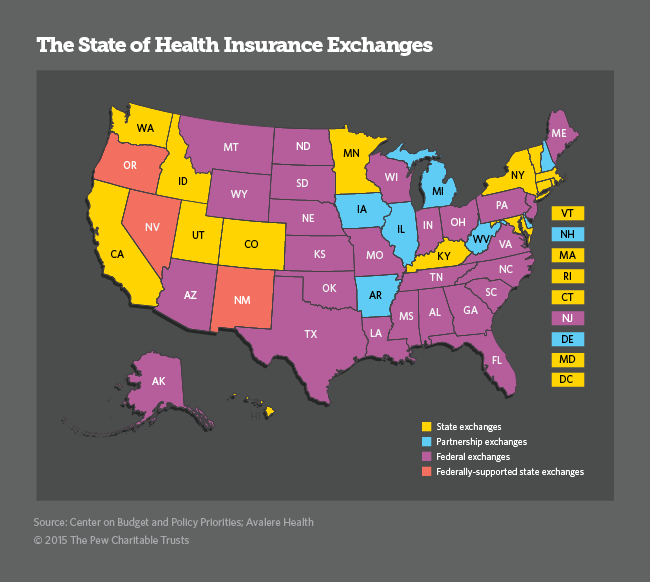 Of those 8.2 million, the study found, 61 percent are non-Hispanic whites, 62 percent live in the South, 71 percent work at least part time and 82 percent are considered, by federal measures, to be low- or middle-income rather than poor. The tax credits are available for people with incomes between 100 percent and 400 percent of the federal poverty level. For a family of four, the eligible income range is between $23,850 and $95,400.

In 2014, the first year the exchanges were open, the Obama administration reported that 87 percent of the 5.4 million Americans who chose a health plan through the federal health exchange were eligible for some financial help. Those who qualified for tax credits on the federal exchange paid an average of $82 a month in premiums for their coverage, which was about one-fourth of what they would have paid without the federal assistance.

But even people who don’t qualify for the tax credits would be affected by their disappearance.  Because many of the people who receive the credits are relatively healthy, their departure from the insurance pool would lead to a 35 percent increase in premiums, according to the report.  That increase would make coverage unaffordable for about a quarter of the 4.9 million Americans who bought insurance on the federal exchange without a tax credit.

The Supreme Court’s ruling in King v. Burwell will not affect tax credits in the 13 states and the District of Columbia which operate their own exchanges. Nor would it affect the three states—Nevada, New Mexico and Oregon—which have federally supported, state-based exchanges, that perform all of the functions of a state exchange while relying on the federal government for technology support.

Many of the states that declined to create their own insurance exchanges were expressing their opposition to the Affordable Care Act. However some of them, such as Delaware, decided they didn’t have the technical capacity to create one.

A number of the states which rely on the federal exchange, including Iowa, Maine, Mississippi, North Carolina and Pennsylvania, joined in a legal brief filed by Virginia (another state without its own exchange) opposing the plaintiffs in the lawsuit. Other states which do have their own exchanges, such as California, Maryland and New York, also signed on, fearing the disruptions that would occur in their insurance markets if the credits are struck down. Their concern is that because most of the insurance companies that sell policies on the federal exchanges are national companies, the withdrawal of millions of relatively healthy people from the insurance pool would have a spillover effect in states with their own exchanges.

In his brief, Virginia Attorney General Mark Herring argued that when states weighed whether to create their own exchanges, there was no indication policyholders from those states would be denied federal tax credits if the states used the federal exchange.

If the credits are struck down, Herring said, not only would millions of citizens in those states be priced out of affordable health insurance, but the insurance marketplaces in those states “would be rendered dysfunctional.”

In its amicus brief, America’s Health Insurance Plans (AHIP), a trade association representing the health insurance industry, said insurers would not only lose millions of customers, but they would lose so many young and healthy customers that premiums for others would soar to unsustainable rates. “It would leave consumers in those states with a more unstable market and far higher costs than if the ACA had not been enacted,” the brief said.

Other states, including Alabama, Georgia, Nebraska, South Carolina and West Virginia, signed on to an amicus brief from Oklahoma in support of the plaintiffs. The brief by E. Scott Pruitt, Oklahoma’s attorney general, argues that the tax credit was meant as an enticement for states to create their own exchanges.

States that chose not to do so, Pruitt argued, understood that their citizens would not be eligible for the tax credits. Other federal programs, Pruitt wrote, including No Child Left Behind and the Children’s Health Insurance Program, also condition federal dollars on certain state activities.

Congress could provide a fix, but no one believes that Republicans and Democrats could agree on a solution. That leaves the states to step in, but they may not have the time, resources, technical ability or political will to prevent large-scale disruption.

States now using the federal exchange could try to convert to state exchanges. But some states, such as Missouri, Montana and North Carolina, have passed legislation prohibiting the creation of a state exchange, and the Republican governors and legislatures in many of those states may still object to taking any steps to support the ACA.

There are nonpolitical problems as well. The ACA provided nearly $5 billion in federal financial assistance for states that built their own exchanges prior to 2014. That money is no longer available. States would have to spend tens of millions of dollars of their own money to develop their own exchanges.

Timing is also a factor. Presuming the Supreme Court’s ruling comes in June as anticipated, states would have only five months to build sophisticated insurance operations and websites. By the time the first state exchanges opened in 2013, a number of states, including Maryland, Vermont and Oregon among others, had already devoted years to fashioning their systems, and those still failed spectacularly in the first year of operation.

The seven states that operate exchanges in partnership with the federal government – Arkansas, Delaware, Illinois, Iowa, Michigan, New Hampshire and West Virginia – may have an easier time. Those states already handle some exchange responsibilities, such as consumer assistance, and may be able to assume the rest. Arkansas already has plans to launch its own exchange in 2017, although that would be a year late for the 95,000 Arkansans who would lose their federal tax credit for next year.

Theoretically, it’s possible that states could switch to a state exchange. But Sara Rosenbaum, a professor of health law and policy at the Milken Institute School of Public Health at the George Washington University, said it wouldn’t be easy. “There is no assurance of that because it takes money, it takes technology,” said Rosenbaum, who worked on an amicus brief siding with the Obama administration on behalf of the deans of university schools of public health.

What would happen to the 8.2 million who could lose their health insurance is unclear. They could turn to the charity of hospitals for health care, although hospitals receive far less federal money for such care than they did before implementation of the ACA. The sharp reduction in patients with insurance also would cost doctors, perhaps forcing some of them to close their practices, according to Benjamin of the American Public Health Association.

Some worry the ACA, which is designed to provide affordable health care coverage to the vast majority of Americans, would collapse if the federal tax subsidies are not available everywhere. Without the tax credits, said Rosenbaum, the entire package of reforms that constitutes the ACA “would be unthinkable.”