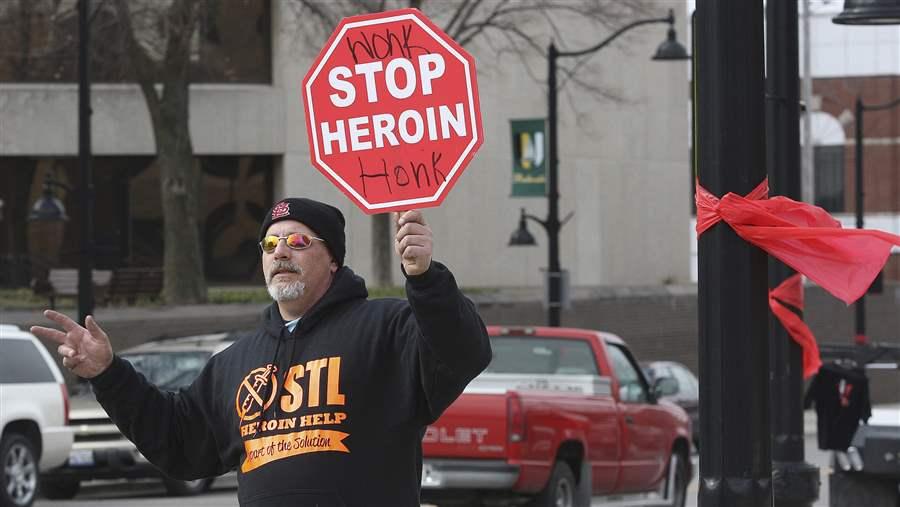 Phil Wahby, an outreach coordinator with the STLHeroinHelp organization, waves to motorists during an anti-heroin rally in Belleville, Illinois. (AP)

On Super Bowl Sunday, most football fans watched ads for Victoria’s Secret, the lost Budweiser dog and a deadpan Kim Kardashian extolling the virtues of T-Mobile. But in St. Louis, those national ads were supplemented with a different kind of Super Bowl commercial.

On screen, the camera focused on the face of a white middle class teenager as he died of a heroin overdose. Off screen, a singer crooned along to perky guitar music: First you stole prescription pills from your mom/You threw back a few and then they were gone/So you’re jonesing real bad and you need some more… And that’s how, how you got addicted to heroin.

Beginning in the 1920s, when heroin became illegal, people tended to think of heroin abuse as a problem plaguing people of color in the big cities. But in the past decade, heroin abuse has exploded—and it is hitting white people in suburbs and rural areas particularly hard. As the demographics of heroin use have changed, so have states’ efforts to combat the problem.

“People have recognized that (heroin addiction) is a problem facing folks they know as well as groups that are distant from them. That certainly affects the way you view the problem,” said Kurt Schmoke, who as Baltimore mayor from 1987 to 1999 was harshly criticized for his efforts to decriminalize drug use.

Twenty-seven states and the District of Columbia now have laws designed to make naloxone, a heroin antidote that is 99 percent effective, more easily accessible to overdose victims, according to the Network for Public Health Law. Since 2007, 21 states and the District adopted so-called “Good Samaritan laws” that provide some type of immunity for people calling 911 to report or seek help for an overdose.

“In some states, now that budgets are generally looking better, states are looking at this as a different problem than in the previous decade,” said Karmen Hanson, program manager for the National Conference of State Legislatures (NCSL). “It’s not just an urban problem; it’s a rural problem. It’s not just under the viaduct in the big cities. It’s also a suburban problem. It’s widespread culturally and ethnographically.”

Between 2006 and 2013, the number of first time heroin users nearly doubled, from 90,000 to 169,000, according to the U.S. Substance Abuse and Mental Health Services Administration (SAMHSA). Ninety percent of the people who tried the drug for the first time in the past decade are white, compared to an equal number of white and nonwhite users who got their start before the 1980s, according to a study published last year in JAMA Psychiatry.

“Heroin use has changed from an inner-city, minority-centered problem to one that has a more widespread geographical distribution, involving primarily white men and women in their late 20s living outside of large urban areas,” researchers concluded.

Perhaps not coincidentally, the past two years have seen a remarkable uptick in “harm reduction” laws that focus on saving lives, rather than incarcerating users.

“With the changing demographics, there is the ability to frame this as a public health issue because many policy makers and law enforcement folks seem to relate to white users who are experiencing heroin use disorders more than people of color,” said Kathie Kane-Willis, director of the Illinois Consortium on Drug Policy at Roosevelt University. Kane-Willis is a former heroin user who was introduced to the drug as a college student at Sarah Lawrence College in the late 1980s.

Ted Cicero, a psychiatry professor at Washington University Medical School and a coauthor of the JAMA study, agreed that “when heroin became a white problem of middle-class kids,” that got lawmakers’ attention. “Now that it’s hit home (for some legislators), it’s become a major, major issue. No question the epidemic is growing. The demand is growing for it. And as long as there is that demand, the need will be met.”

The shifting attitude fits a historical pattern, according to Marc Mauer, executive director of The Sentencing Project, a nonprofit that promotes sentencing reforms. In the 1930s, he said, the popular perception of marijuana was that it was “used in the racy part of town, in jazz clubs. The public perception was the users were Mexicans and African-Americans.” As a result, Mauer said, marijuana was viewed as “the demon drug” and penalties for its use were harsh.

But by the 1960s, white middle-class youth had started smoking pot and perceptions changed. Several decades later, Washington state and Colorado have legalized recreational marijuana use and other states are poised to follow suit.

The 21st century heroin epidemic has its roots in the crackdown on the abuse of OxyContin, Vicodin and other opioid pain medications. According to the U.S. Department of Health and Human Services, nearly 80 percent of heroin users say that they previously abused prescription opioids. When, for example, the formula for OxyContin was tweaked to make it more difficult to grind up to snort or inject, many abusers switched to heroin.

The shuttering of so-called “pill mills” also contributed to the scarcity of prescription opiates.

Meanwhile, drug traffickers peddling heroin slashed their prices to undercut the rising prices of prescription opiates—and a new market was created. Heroin supplies increased exponentially as well. Between 2007 and 2013, seizures of the drug increased 289 percent, according to the Office of National Drug Control Policy.

“The face of heroin changed with the rise and use of prescription drugs,” said Barbara Cimaglio, the deputy commissioner of Alcohol and Drug Abuse Programs with the Vermont Department of Health. “We found more people getting into trouble because they had an injury or some medical condition that got them involved with prescription opiates. Then when a lot of those folks were no longer able to get those prescription opiates, it was heroin because it was cheaper and easier to get.”

Among those who started using heroin in the 1960s, more than 80 percent reported that heroin was the first drug that they had ever used. Of those who began using heroin in the 2000s, 75 percent reported that their first drug use began with prescription opiates. Beginning in 2010, as heroin use increased across the country, prescription opioid use decreased, Cicero of Washington University said.

To address Vermont’s runaway heroin problem—the state saw a 250 percent increase in people seeking treatment for heroin addiction between 2000 and 2014—lawmakers set up a pretrial services system, Cimaglio said. The system allows people arrested on drug charges to get screened for substance abuse and gives them the option of going to treatment rather than being charged with a crime and entering the criminal justice system.

This usually works when officials are able to determine that the arrestee’s criminal activity was related to addiction and that they are not a drug dealer or trafficker, Cimaglio said.

“People are much more aware that addiction is a health problem. Because of the illegality of certain substances, people are driven to commit acts they wouldn’t have to commit to get alcohol,” Cimaglio said.

As Baltimore mayor, Schmoke faced considerable criticism for turning the war on drugs into a public health issue. For his efforts to implement a needle exchange program to reduce the spread of HIV/AIDS, he was dubbed “the most dangerous man in America” by U.S. Rep. Charles Rangel, a Democrat.

“I obviously wish that elected officials had embraced the idea of a public health war on drugs rather than criminal justice war on drugs,” said Schmoke, now president of the University of Baltimore. “It would have allowed us to reduce our incarcerated population; it would have left people without criminal records that now complicate their ability to get employment and lead stable lives.”

“(But) that’s in the past now. We can only look to the future and focus more on the public health aspects of this rather than the criminal justice aspect.”