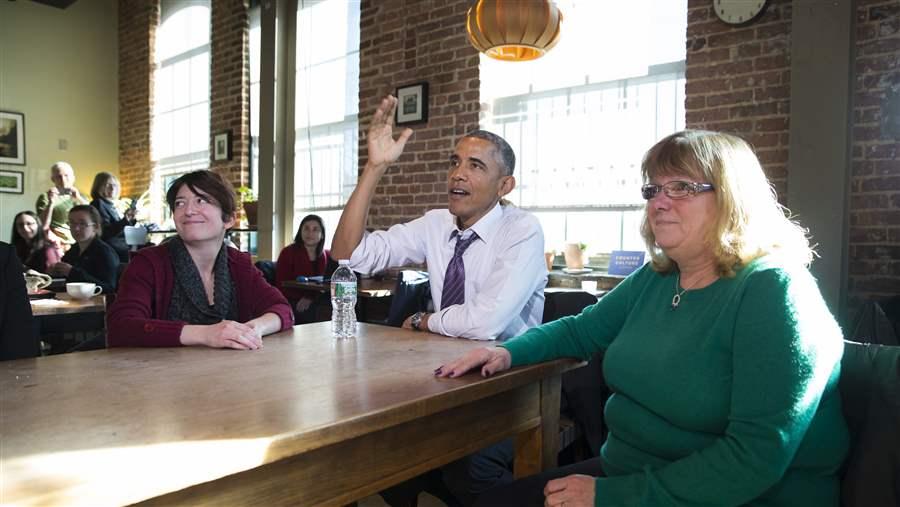 President Barack Obama talks about his paid family leave proposals during an unannounced stop last month at a Baltimore cafe. By offering federal money to states to set up their own paid leave programs, the president may break a legislative logjam on the issue. (AP)

After more than a decade of trying, backers of paid family leave have managed to get just a handful of states to guarantee paid leave for new parents and workers who have to take time off because they are sick or must care for an ailing family member.

A proposal by President Barack Obama, which he unveiled in his State of the Union speech last month and included in the federal budget he proposed on Monday, could break the logjam.

Just three states currently have paid family leave policies. California became the first state to adopt paid family leave in 2002, followed by New Jersey in 2008 and Rhode Island in 2013. In all three, benefits are paid from the state’s temporary disability insurance program. But only five states have disability insurance programs (Hawaii and New York are the others). As Stateline reported last year, the lack of such programs in other states has emerged as perhaps the biggest roadblock to paid leave laws in the states.

Obama is calling on Congress to approve $2 billion for up to five more states to start their own paid leave programs. That money would be available for three years, after which states would have to pick up the tab for the programs. The budget also includes $35 million states can tap for technical and administrative support as they consider their own plans.

Taken together, the moves have paid leave supporters eager for another push in statehouses this year.

Already, bills have been drafted in Colorado, Connecticut, Hawaii, Massachusetts, Nebraska and Wisconsin, and campaigns are likely in other states and the District of Columbia.

“The fact that the president put paid sick leave days and paid family leave (in his State of the Union) is tremendous progress in terms of moving the nation,” said Vicki Shabo, vice president at the National Partnership for Women & Families, an advocacy group.

The paid leave programs in California, New Jersey and Rhode Island are similar, but California’s is cited most often as a model. Workers in California pay a 1 percent payroll tax to fund the program, which pays for qualified workers to take six weeks off at about half their normal weekly salaries, up to a maximum of $1,100.

Paid leave proponents have failed to push through a similar system in numerous states, but perhaps the most frustrating defeat occurred in Washington state. Lawmakers there actually passed a paid leave law in 2007, only to see it collapse when they couldn’t agree on a plan to fund it. Others have studied the idea, drawing on money from the U.S. Department of Labor to do so.

But Obama’s plan has proponents feeling more bullish than they have in years.

Sherry Leiwant, co-president of A Better Balance, a New York-based group that supports paid leave, called Obama’s proposal “a huge factor” in the debate, although she noted Republican control of the New York State Senate would be an added challenge this year.

Lisa Kimura, executive director of the Healthy Mothers Healthy Babies Coalition of Hawaii, which will hold a lobby day this week supporting its paid leave bill, said federal funding could alleviate fiscal concerns that have held the program back. The bill’s first hearing is scheduled for today.

“Many of the initial concerns about implementation of the program involve questions about cost,” Kimura said. “Putting paid family leave in the national spotlight creates the opportunity for honest conversation about what families need and deserve.”

But many Republicans, backed by business groups, continue to oppose any kind of paid leave mandates at the state or federal level, a reality that could stymie the president’s efforts before they even have a chance to affect the states. In some places, Democratic lawmakers also have been wary of the impact on employers.

“Americans have great freedom when it comes to work,” U.S. Sen. Lamar Alexander, a Tennessee Republican, told the Associated Press after the president’s speech. “One more government mandate, however well-intentioned, will only reduce those freedoms.” (The federal money is designed to spur states to pass their own paid leave laws, but Obama is not proposing a federal paid leave mandate.)

Some human resource specialists also question the wisdom of paid leave policies, warning that they can handcuff companies that want to offer flexible workplace compensation and time-off policies to their workers.

“The idea here is that one-size-fits-all mandates limit employers’ flexibility to be creative and innovative in designing their overall leave programs,” said Lisa Horn, director of congressional affairs for the Society for Human Resource Management, a membership organization for human resource professionals.

“You can’t look at state policies in a vacuum, because now you’re often required not only to comply with the state but also the federal statute,” Horn said. The federal Family and Medical Leave Act, signed into law in 1993, guarantees workers up to 12 weeks of unpaid, job-protected leave per year. FMLA applies to all public agencies, all public and private K-12 schools, and companies with 50 or more employees. In some cases, Horn said FMLA overlaps with or conflicts with state law.

But even Horn expects paid leave proposals to gain traction this year, especially in the five states (Connecticut, Delaware, Hawaii, Oregon and Vermont) that don’t have paid leave programs but where Democrats control both the legislature and the governor’s mansion.

In those states, Shabo of the National Partnership for Women & Families said, the president’s push and the availability of federal money could make a huge difference.

“There’s a strong argument to be made that having federal funding available to do the work that would need to be done to piggyback is important,” Shabo said.