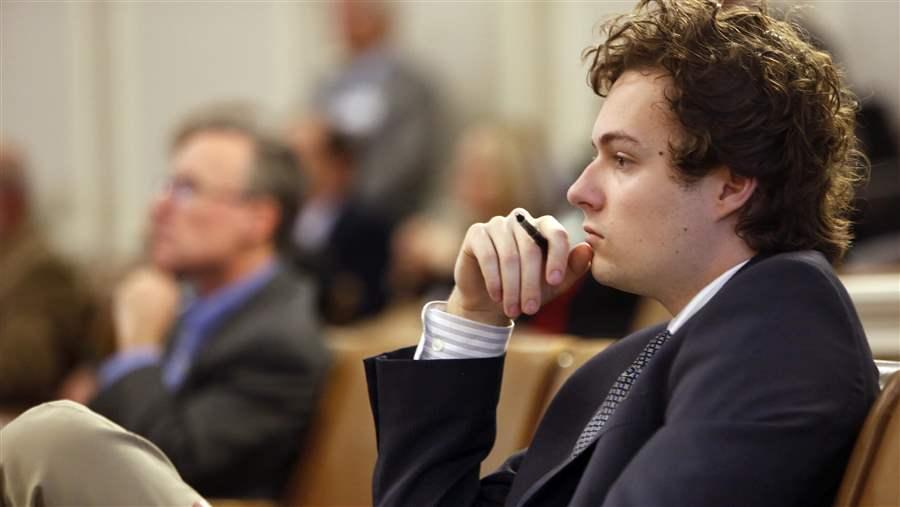 New Hampshire state Rep. Travis Bennett, 23, a senior at Plymouth State University, is one of the few millennials among New Hampshire’s legislators, who are the oldest in the country, with an average age of 66.

State lawmakers across the U.S. are older than their constituents, an imbalance that might be tilting policymaking toward the interests of seniors and away from the country’s largest living generation: millennials.

The average age of lawmakers in the 50 states is 56, putting a majority of them in the baby-boom generation, which started coming of age politically in the 1960s and ’70s, according to a new survey by Stateline and the National Conference of State Legislatures. It’s higher in some states, such as New Hampshire, where the average age is 66, and Idaho, where it’s 63. The average age of the U.S. voting population, meanwhile, is 47.

Millennials, those born after 1980 who entered adulthood at the turn of the century, hold just 5 percent of state legislative seats, while comprising 31 percent of the U.S. voting-age population. Millennials recently became the largest living generation.

Millennials in the early stages of their professional lives are less apt to run for office than older people who are more settled in their careers or are nearing retirement. The problem, some political scientists say, is that when younger legislators are left out, so are their viewpoints.

Older legislators — who also tend to be wealthier — may be less likely to focus on issues such as school spending and student loan debt. Too much gray hair in a legislative body also leaves some younger voters feeling disconnected from the political process.

The result may be a self-perpetuating cycle. Michael McDonald, an associate professor of political science at the University of Florida, said while there are few young faces in the legislatures, there are even fewer at the polls, where turnout among young voters is “abysmally low.” Census data shows 23 percent of millennials voted in the 2014 elections compared with 59 percent of those 65 and older.

“If state legislators don’t perceive young people to be engaged, they’re not going to be standard-bearers for the issues young people care about,” he said.

A legislator’s political outlook can be colored by his or her stage of life and by generational experiences. Millennials, for instance, are more likely to be single. They have higher levels of student loan debt, poverty and unemployment, and lower levels of wealth and personal income than their predecessor generations had at the same age.

Politically, they expect to get less from government programs such as Social Security. Those with young children are more interested in funding public education than older people whose children are grown, and who may be reluctant to pay higher taxes to support schools.

That diversity, however, may not show in the legislature. Ruth Mandel, director of the Eagleton Institute of Politics at Rutgers, found there are far more young men serving as state legislators than women. The career and family concerns that keep young people from running for office tend to impact women more.

In Nebraska, where millennials make up 16 percent of the Legislature — higher than in any other state — younger lawmakers “know what’s going on with families,” said Republican state Sen. Beau McCoy, a 35-year-old father of four. “We have careers. We multitask. When you’ve been newly married, raising kids, have a small business — we understand very well the things we have worked on.”

In New Hampshire, state Rep. Travis Bennett, a 23-year-old college senior at Plymouth State University, thought it important to speak out on behalf of his fellow students against a bill instituting a 30-day residency requirement to register to vote. He said the measure would have dampened the political participation of college students. Members of the New Hampshire General Court, the oldest state legislators in the country, approved the bill, but Democratic Gov. Maggie Hassan vetoed it. Bennett, who is slated to graduate this year, said he doesn’t plan to run again, in part because of the low pay — in New Hampshire legislators earn $100 a year — and the challenges of finding a flexible job that would allow him to be in the legislature.

But most issues that confront states cross generational boundaries. In Maine, for instance, many young people are leaving the state in search of greater economic opportunity elsewhere. It’s an issue that affects older Mainers as well as millennials, said state Rep. Ryan Fecteau, a 23-year-old Democrat.

The departure of young residents shrinks the state’s tax base, which creates a greater property tax burden on elderly homeowners. It also makes it harder for retirees to sell their homes. In response, Fecteau introduced a bill to help those with student loan debt get into their first home by reducing some of their debt, though it did not pass the Senate.

“Having young people at the table is just as important on issues that are straining seniors,” he said.