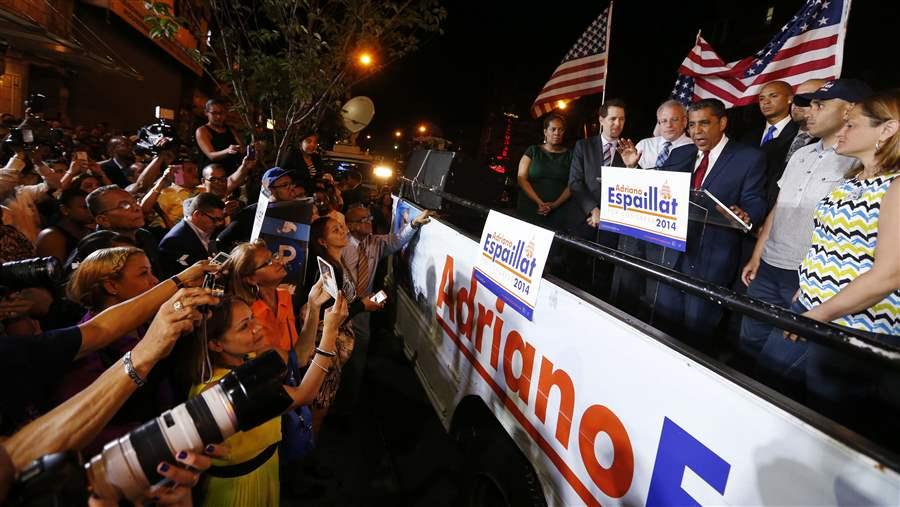 New York state Sen. Adriano Espaillat, a Democrat who is running for U.S. Congress, is indicative of how Dominican-Americans are seeking greater political power.

Last in a series on black immigrants.

NEW YORK — Inside the sprawling South Beach restaurant in Washington Heights, Dominican immigrants are crammed in every cranny, watching telenovelas on big screens and wearing expressions of patience wearing thin. They’re waiting to register to vote with the Dominican Republic Central Board of Elections, which has set up shop to enroll as many expatriates as it can before the Dominican Republic’s next presidential election, in May.

As they wait, another group is competing for their attention: A band of canvassers is working the crowd, urging them to register right here in the U.S., so they can vote in the 2016 elections. The canvassers cajole; they entreat. “Tu voto es poder!” they say. “Your vote is power.”

“Our goal is to educate, register and mobilize the Dominican-American community to vote,” said Eddie Cuesta, New York City director of Dominicanos USA (DUSA), a nonpartisan voter registration group. “Dominicans are like the sleeping giant that all of a sudden people are recognizing.”

Immigrants face a number of hurdles — especially if they are black — in moving to the U.S. and integrating society. As Stateline has reported this year in a four-part series, black immigrants who come from Africa find themselves overeducated and underemployed. And refugees can be met with dwindling federal and state support for their resettlement.

But one way immigrants have traditionally gained power in the U.S. is through politics, from voting and getting involved in neighborhood commissions and school boards to being elected to city councils and state legislatures, and sometimes moving on to the national stage. And that’s Cuesta’s goal: to get one of the fastest-growing Hispanic groups in the country actively involved in the political process.

Read the first three parts of the series

In the not so distant past, Dominican immigrants channeled their political energy into the happenings back home, political scientists say. But as their numbers have grown to nearly a million, they are increasingly turning their focus to political empowerment in the U.S.

In the past two years, DUSA, which is funded in part by a family of Dominican sugar barons, has registered 100,000 Dominicans to vote in the U.S. Dominican-Americans are in state houses in Maryland, Massachusetts, New York, New Jersey and Rhode Island. Until recently, Providence, Rhode Island, had a Dominican-American mayor — he left that office after an unsuccessful bid for governor last year. U.S. Labor Secretary Thomas Perez is the son of Dominican immigrants.

And in New York and Maryland, 2016 candidates hope to become the first Dominican-Americans to serve in the U.S. House of Representatives.

“At the end of the day, you’ve got to be able to vote, to get political muscle, to influence elections so folks pay attention to you,” said New York state Sen. Adriano Espaillat, a Dominican-born Democrat who is running for U.S. Congress.

When he first ran for office 15 years ago, Espaillat said, he would knock on doors, soliciting the votes of his compatriots. It made for frustrating — and frequently fruitless — work because so many immigrants hadn’t registered to vote.

Last year, as he was campaigning yet again, he knocked on an apartment door in Washington Heights, the traditional mecca for Dominicans in the U.S., and met a man who remembered him from 15 years earlier. “He said, ‘I was the only one voting.’ Then he pulled out all his kids and said, ‘Now there are five of us.’ People are becoming citizens very rapidly.”

The vast majority of Dominicans enter the U.S. legally, according to the MPI, many joining family members who’ve already settled here. Many struggle with English and work in low-wage service jobs, and only about 14 percent have a college degree. But research has shown that the children of Dominican immigrants go to college at higher rates than children of other groups of Latino immigrants.

Dominicans are the fifth-largest Hispanic group in the country, and one of the fastest-growing. New York, Boston and Miami have the largest populations of Dominican immigrants.

Recently, Dominicans have been scattering, settling in pockets along the Northeast: Reading, Pennsylvania; Lynn, Massachusetts; and Providence, according to Gustavo Paredes of the Hispanic Institute, a Washington, D.C., think tank.

“They’re looking for affordable housing,” Paredes said. “But they’re also looking for where they can leverage power for the things they care about: jobs, education, housing and better economic opportunities for their children.”

But foreign-born Dominican-Americans, who are able to hold dual citizenship back home and in the U.S., have historically been slow to vote in U.S. elections, he said.

For one, he said, they need a reason to. A July study commissioned by DUSA found that 79 percent of registered Dominican-American voters said they would be more likely to vote if they had a chance to elect the first Dominican-American to the U.S. Congress.

“They’ll sit on their hands if there’s not a reason to vote,” Paredes said. “Like any group, they like to be asked for their vote. You need to ask them. It’s a sign of respect.”

The vast majority of Dominicans on the island — roughly 90 percent — have African ancestries, but only about 14 percent identify as black, rather than mixed race, said Randy Capps, an MPI demographer. In comparison, 85 percent of West Indians in English-speaking islands identify as black, Capps said.

Some Dominicans embrace their “African-ness,” while others do not, Hernández said. “It’s complicated. We are not a monolithic society.”

Politically, this plays out in interesting ways. In the 2012 and 2014 elections in New York, Espaillat faced U.S. Rep. Charles Rangel in the race for the 13th Congressional District, which encompasses Harlem and Washington Heights. The district is now majority Latino, but it was long a stronghold of African-American political power. And Rangel, the son of an African-American mother and a Puerto Rican father, had historically downplayed his Latino roots.

Over the years, many Dominicans have supported Rangel, who has been in the U.S. Congress since 1971. And they continued to vote for him, even when Espaillat threw his hat into the ring, Hernández said, because Rangel had a proven track record. This demonstrates Dominicans will cross the racial and ethnic line to vote for a candidate who they think will get their needs met, Hernández said.

“I don’t see Dominicanos picking someone just because they are Dominicano,” Hernández said. “They’re too pragmatic for that.”

Dominicans and African-Americans face similar issues, Hernández said. Almost every day, she said, while walking to the subway in upper Manhattan, she sees young Dominican-American men with their arms in the air, being questioned by police. “We have the same skin color, whether we acknowledge it or not.”

Joseline Peña-Melnyk immigrated with her family in 1974, when she was 8, and remembers translating for her mother at the welfare office in Washington Heights. Eventually, she was translating for everyone on her block, and her mother nicknamed her “la abogadita” — “the little lawyer.”

Today, as the lone Dominican in the Maryland Legislature, Peña-Melnyk said joining the Legislative Black Caucus was a no-brainer. “I’m a black Latina. I look black.” The Democrat, who’s running for U.S. Congress next year, said she’s also been able to find common ground with the region’s heavily Salvadoran population.

In Rhode Island, where Juan Pichardo, in 2003, was the first Dominican in the country elected to a state Senate, there are only two senators, both Democrats, who belong to racial minorities — Pichardo and Harold Metts, an African-American. The two share many of the same concerns and usually work closely together, Pichardo said.

“African-American issues are Dominican issues,” said Pichardo, who is the deputy majority leader. “We want economic progress, social justice, and to build on our political influence.”

Cuesta, DUSA’s New York City director, navigates his BMW down Juan Pablo Duarte Boulevard in Washington Heights, renamed for one of the founding fathers of the Dominican Republic. It’s easy to feel that you’ve landed in downtown Santo Domingo. There’s La Nacional, where Dominicans can wire money to family back home, and “Elsa La Reina Del Chicharron” — “Elsa the pork queen” — a chain of Dominican restaurants. Above a bank is a large green sign urging Dominicans to vote for the “Partido Liberal Reformista,” the “Liberal Reformist Party,” in the country’s presidential election.

Even as many Dominicans keep one foot in their homeland, DUSA is trying to engage them here. The group, with an operating budget of $3.5 million a year, was launched in 2013 with seed money from members of the Vicini family, which owns sugar plantations on the island. Between 2013 and 2015, DUSA registered 100,000 Dominicans, Cuesta said, and it wants to register another 100,000 by the 2016 elections.

DUSA staffers comb through voting records to try to identify Dominicans. They focus on newly naturalized citizens in specific neighborhoods and use a ranking system to identify which names are likely to belong to Dominicans. Then they hit the streets and start knocking on doors. And, come election time, DUSA mails fliers to new voters with their polling location and provides free rides to the polls.

Back outside the South Beach restaurant, DUSA canvassers Dionisia Mercado and Nancy Ramirez good-naturedly gang up on Martín Aría, a 39-year-old restaurant worker who hails from Santiago.

“I want to vote!” Aría tells them in Spanish. But when he took his citizenship exam he failed, because his English was shaky. The majority of his family is here, including his two children. The adults are all citizens who vote. The DUSA crew keeps at him: Go home and practice your English, they tell him.

I will, Aría said. “I want to participate in the process.”