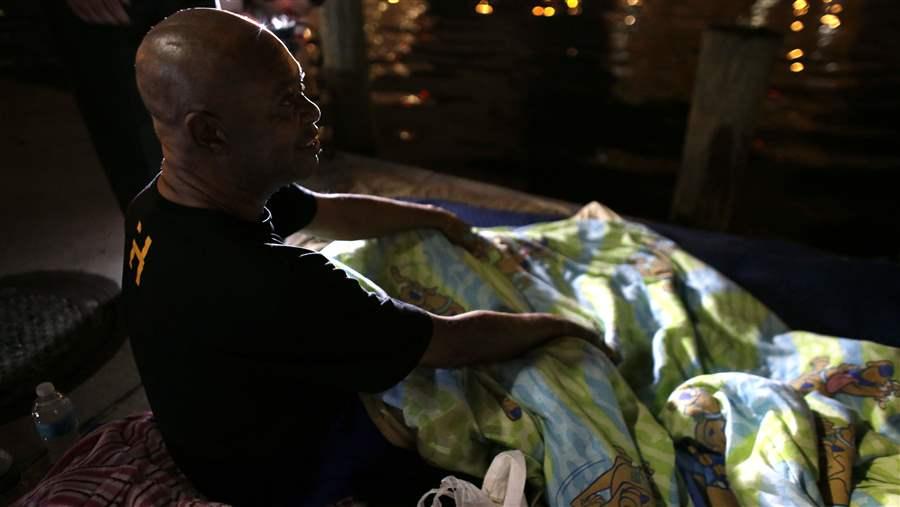 Homeless veteran James Thomas talks with officials in Miami. Miami-Dade County is one of hundreds of municipalities that had sought to end veteran homelessness by the end of this month.

ALEXANDRIA, Va. — The smell of coffee filled the air on a recent Thursday morning in Carpenter’s Shelter, a homeless shelter here, as about a dozen people milled about.

Two U.S. Army veterans were among them: a middle-aged man and woman who aren’t looking for a permanent place to live. They said the food, showers and services at the shelter are enough, for now.

The Obama administration, in June 2014, challenged local governments to find a home for all veterans who want one by the end of this month. At least nine states and 850 municipalities tried to meet the goal, but Virginia and 15 municipalities were the only ones that succeeded.

But even there, hundreds of veterans remain homeless, most often because they have mental health or substance abuse problems, or just want to live on the street. In Virginia, the two at Carpenter’s Shelter are among about 600 homeless veterans. There are hundreds more in the municipalities that met the goal — in Alabama, Florida, Illinois, Louisiana, North Carolina, Nevada, New Mexico, New York, Pennsylvania and Texas.

The goal did not require municipalities to show that all veterans had been housed — just to prove they could quickly provide shelter, if needed. And even in places that did find a home for most veterans, some of them found themselves on the street again.

The fact that so few cities, and just one state, have met the challenge points to just how complex the issue is.

At Carpenter’s Shelter, staff comes at it with “a heavy dose of optimism, with some pragmatism, as well,” said Shannon Steene, the shelter’s director.

“They didn’t get here overnight,” he said, “and they probably aren’t going to get out of it overnight.”

In many of the states that still have thousands of homeless veterans on the streets — the largest populations are in California, Florida, New York and Texas — the biggest challenge is there simply isn’t enough affordable and suitable housing, people who work with homeless populations say. That’s a problem not just for the homeless, but for many middle-class families, and it’s one homeless advocates cannot solve on their own.

In San Diego, California, for instance, at least 200 veterans who have housing vouchers that would pay some of their rent aren’t able to find apartments because the vacancy rate is so low, said Phil Landis, president and CEO of Veterans Village of San Diego. The nonprofit has been helping homeless veterans since the 1980s.

Cities large and small met the federal milestone this year. Philadelphia, with a population of about 1.6 million, announced Friday that it met the goal. Troy, New York, a city of about 50,000, met the goal in September.

Virginia, the first and only state to reach the goal, and New Orleans, the first city to do it, used similar tactics to attack the problem. They employed a “housing first” strategy of getting veterans off the streets, out of shelters, and into stable housing as the first step in trying to bring stability to their lives.

Local governments joined with advocacy groups to enlist a swarm of volunteers who walked the streets and visited shelters, handing out fliers and encouraging veterans to take advantage of the programs.

They made lists of the names of each veteran living on the street or in a shelter, and tried to help them one by one. And they checked back often.

Organizers convinced landlords to house the veterans, and gave the veterans vouchers to use to pay rent for as long as they need. Some nonprofits even signed their leases for them.

That’s known as “master leasing,” and Pamela Michell, director of New Hope Housing, an Alexandria nonprofit that uses the approach, said it provides residents and landlords with a go-between, should any problems arise.

The work is ongoing. Shelter workers continue to try to build relationships with veterans who still don’t have a roof over their heads, urging them to get off the streets and to get help with the problems that keep them from being permanently housed.

“I try to encourage them,” said Sharon Addison, coordinator of the day program at Carpenter’s Shelter in Alexandria. “I say, ‘The new year is coming up. The shelter’s next door, whose gonna go next year?’ Sometimes they go, sometimes they don’t.”

Addison gave both of the veterans who were in the shelter on that Thursday morning information about services weeks ago.

One of them, Aaron McCullough, 55, stays at the shelter some nights despite the fact he is paying $90 a week to rent a small room in a house in Fairfax, Virginia, a 20-minute bus ride away.

The shelter is closer to where he works. He said he would try to find a more permanent place, but he “doesn’t think it will work. It’s too complicated, or something. I’m saving money.”

The federal push to house homeless veterans also encourages the housing first approach of first providing shelter, before the underlying reasons for their homelessness — such as mental illness or drug addiction — can be addressed. Seventy percent of homeless veterans have substance abuse problems and half have a serious mental illness, according to the National Coalition for Homeless Veterans.

Virginia and Louisiana had both signed on to this strategy before the national effort to focus on homeless veterans. The model has often demonstrated that people are more likely to succeed when given a stable place to call home, according to a joint study by the U.S. Department of Veterans Affairs and the National Center on Homelessness Among Veterans.

Much of New Orleans’ progress was a result of the rapid re-housing system it put in place after Hurricane Katrina, in 2005, said Martha Kegel, director of Unity of Greater New Orleans, the nonprofit that has led homelessness efforts in the city since then. Rapid re-housing, like housing first, focuses on quick housing as the first step of intervention, but it focuses on homeless people with moderate needs only, not the chronically homeless.

What New Orleans did became a model for other municipalities across the state, and it was largely successful. In Louisiana, the number of homeless veterans fell more than in any other state from 2011 to 2015, by 58.7 percent, to 392.

This kind of progress has been seen nationwide. The number of homeless veterans living on the streets or in shelters fell by 27 percent, to 47,504, according to the annual count by the U.S. Department of Housing and Urban Development released last month.

Colorado, Louisiana, New York and Texas made the most headway, all cutting their numbers by more than half.

Even in California, where the average cost of monthly rent is 50 percent higher than in the rest of the country, the number of homeless veterans fell by 32.6 percent, to 11,311.

Local groups say the decline came as federal funding funneled into their communities. In 2009, the VA made ending veteran homelessness a priority, and in 2014, the VA joined with HUD on new initiatives: the Mayors Challenge to End Veteran Homelessness and the 25 Cities Effort.

States and municipalities that have met the federal goal have proven that they have identified and reached out to all homeless veterans, and have the resources and systems in place to house any homeless veteran who wants to be housed, said Beverley Ebersold, regional coordinator at the U.S. Interagency Council on Homelessness.

The times veterans do face homelessness should be “rare, brief and nonrecurring,” Ebersold said.

Housing First Has its Critics

Housing first, the chief tactic used in the national battle, isn’t without its critics.

Landis, of Veterans Village of San Diego, said that while rapid re-housing is effective overall, it sometimes leaves veterans without the case management and mental health services they need.

His group runs a Veterans Treatment Center for those with substance abuse and mental health issues that provides case management and individual counseling. The organization receives about $2.4 million from the VA for the program, which funds 165 beds in the center. Those beds are always full, Landis said. But with the focus on housing first, he has heard that the money will soon dry up.

He and others in the city were upset to see the number of homeless veterans in San Diego rise from 2014 to 2015, from 1,307 to 1,381, despite their focused effort and increased funding.

He suspects the increase may be due, in part, to people who have been rapidly re-housed, without receiving the services they need to succeed.

“We don’t disagree that housing first has enormous positive impact,” Landis said. “But for those vets seeking treatment there should be at least one place in America where they can get it.”