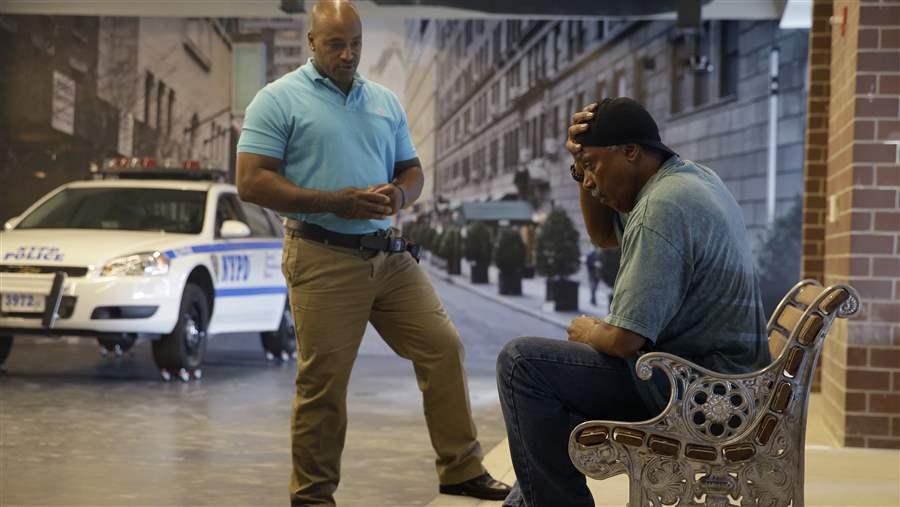 Officer Lamont Edwards talks to an actor during a training class at the Police Academy in New York. Some states want police officers to learn to de-escalate potentially violent situations through additional crisis intervention training programs.

Advocates for policing reform are expected to return to statehouses next month pushing for increased scrutiny of officers, transparency in police department proceedings and improved crisis training across law enforcement ranks.

Backed by increasingly vocal public criticism following reports of police shootings and allegations of brutality in places like Chicago and Minneapolis, many civil rights advocates will ask lawmakers to revisit measures abandoned earlier this year.

Samuel Walker, a policing expert and professor emeritus at the University of Nebraska at Omaha, said public dissatisfaction with police practices makes the upcoming legislative sessions ripe for action.

“I think we have a huge opportunity, the moment is here,” Walker said.

The push for more changes in policing in states such as Missouri, where a white police officer shot and killed Michael Brown, an unarmed black teenager, in August 2014, comes as Americans are losing confidence in police. Advocates hope the shifting public attitude can overcome opposition from police unions and law-and-order legislators who are wary of changes they fear could make policing more dangerous or paint officers as suspects right off the bat in shooting incidents.

Missouri lawmakers considered at least 50 proposals related to policing this year, but passed only one new law — to limit the revenue local jurisdictions can raise through traffic tickets.

Though national opinion is changing, passing more laws in 2016 will depend on politics — and the level of public outcry — in each state. Sarah Rossi, with the American Civil Liberties Union of Missouri, said it’s hard to tell if the legislative climate in her state will be different in 2016.

“I think the biggest hurdle is getting the point across that it’s not enough to reduce the number of tickets, fines and fees,” Rossi said. “We actually have to change the way law enforcement and community members are interacting with each other and that wasn’t really a conversation we got to have last year.”

At least 26 other states passed laws relating to police practices this year, many of which focus on the deployment of police body cameras. Several states are still crafting policies to govern how and when police use the cameras and who can access the footage. Illinois, Indiana, Texas and Washington enacted laws related to crisis intervention training for officers. Maryland and Texas set new requirements for reporting and tracking officer-involved shootings and use of force.

Last week, officials in Ohio announced they would move forward with plans for a tougher police recruit training program that is expected to include drug screening as well as physical and psychological exams. A Maryland legislative panel is on the cusp of making recommendations to reduce the amount of time officers have to comply with an internal investigation and to give the public more time to make brutality complaints against officers.

Because the federal government has no jurisdiction over local policing, state lawmakers are ultimately responsible for reforms. As they proceed, lawmakers can look to recommendations from the President’s Task Force on 21st Century Policing, said Laurie Robinson, a George Mason University professor and former Justice Department official who co-chaired the group of police officers, academics and social justice advocates.

The task force issued a final set of recommendations in May, reflecting what Robinson and others call a “guardian mindset” that encourages law enforcement to police with the idea of protecting communities, rather than trying to control a population by threatening arrest.

The panel’s findings were issued after many states’ legislative sessions had concluded. As state legislatures return to work, starting in January, Robinson said they should pursue laws that address how police-involved deaths are investigated, make updates to police training protocols, and review and update public records laws that pertain to body-camera footage. They should also consider legislation to require local police departments to track officer-involved shootings, she said.

“Please let’s not paint the police with a broad brush,” Manger said. “Let’s not lose sight of the good work that’s being done out there every day.”

Responding to calls for more transparency and accountability, some state lawmakers want to reform how police-involved shootings are investigated, prohibiting investigations by secret grand juries and requiring police departments to participate in multiagency investigations rather than allowing a single department to investigate one of its own. The Maryland panel is also considering opening trial boards — which are made up of sworn officers and review complaints against other police officers — to the public.

The National Fraternal Order of Police supports the task force’s recommendations to increase training for officers and diversify police departments, said Jay McDonald, the group’s vice president. But he is wary of proposals to change the way officers are adjudicated.

“We agree with a lot of the things people have proposed, but we’re not going to agree with things that make our jobs more dangerous or frame us as the suspects right off the bat,” McDonald said.

The Colorado General Assembly passed six laws related to policing reform in 2015, largely because lawmakers were willing to discuss sensitive topics and compromise on bills that would support the state’s urban areas as well as its smaller, rural police departments, said state Sen. Ellen Roberts, a Republican.

The new Colorado laws include measures to collect information and statistics about police-shooting victims, to force police agencies to share information about disciplinary action when an officer applies for a job elsewhere, to provide police body cameras through state grants and to revamp officers’ training. A panel there is also considering whether police officers should receive psychiatric evaluations before they are hired.

Roberts said lawmakers in other states may be scared to take on police issues because sensitive conversations about race and economic disparity are needed to pass good bills.

“This is not an idea for those who are faint of heart,” Roberts told lawmakers at a National Conference of State Legislatures meeting last week. “It does take courage to step into this space.”

Though there is no federal standard for collecting and comparing data about use of force in local police departments, last week the FBI announced that it will expand its program for tracking fatal police shootings to include all cases of serious injury or death caused by a police officer.

Walker, of the University of Nebraska, said tracking police use of force is a first step toward developing broader reforms because it enables policymakers to compare police departments and identify patterns of excessive force.

In Colorado, Maryland and Texas, legislation was introduced this year to expand or implement a data collection law. In Texas, lawmakers charged the attorney general’s office with maintaining a database of police-involved shootings across the state.

Sixty-six people had been injured or killed by police in Texas, as of Dec. 10, since the data collection began in September. Terra Tucker, a policy analyst for the Texas Senate Criminal Justice Committee, said it is not clear when the data will be analyzed to identify trends in policing.

Lawmakers pushing for the database met some pushback from police departments that didn’t want to take the extra steps of passing the data along to state officials, but the demand for reform won out, Tucker said.

“With all the things that are going on in the country right now, there was not a lot of room for [lawmakers] to say no” to collecting the data, she said.