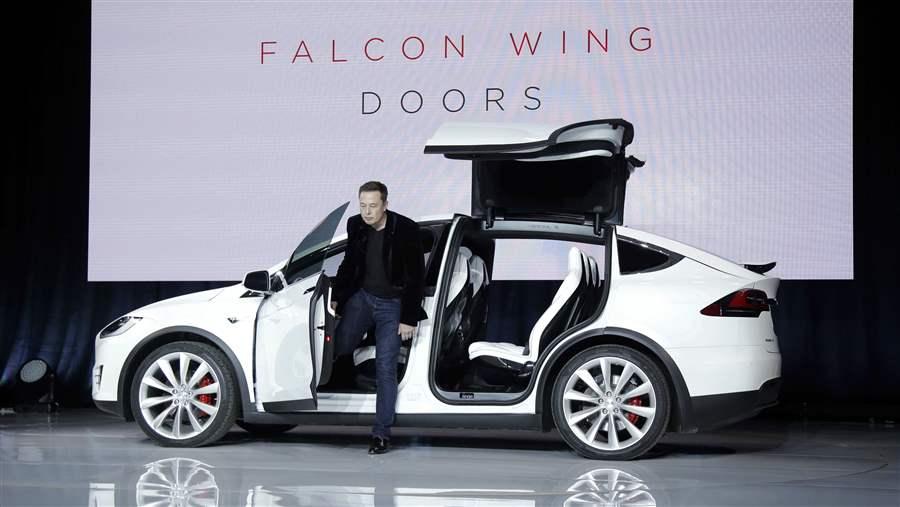 Elon Musk, CEO of Tesla Motors Inc., introduces the Model X car at the company's headquarters in September. Some states have banned direct sales of Teslas to consumers.

This story has been corrected. Tesla has sold about 58,000 cars in the U.S.

When Tesla Motors Inc., the high-end electric carmaker, wanted to set up shop in West Virginia, it ran into a serious roadblock: car dealers.

Tesla sells its cars directly to consumers through stores operated by the carmaker. That leaves dealers out of the mix. And in West Virginia, like many other states, they’re a powerful political force. After car dealers weighed in strongly against Tesla’s plans, the state this year joined four others — Connecticut, Michigan, Texas and Utah — that ban direct retail sales of Teslas and any other autos sold directly by a manufacturer.

The company has been allowed to open stores in about 20 states. Some states, including Maryland, New York, Ohio and Pennsylvania, have approved laws affirmatively allowing direct-to-consumer auto sales, which lets Tesla open stores and sell its electric cars. Maryland limited the outlets to four in the state, however. Several other states also have limits, though many do not.

Tesla, the brainchild of Elon Musk, an innovator who also heads SpaceX, which makes private rockets and spaceships, hasn’t actively tried to sell its vehicles in the other half of the states.

The reasons for the restrictions vary, but they all stem from 1930s-era laws that were aimed at prohibiting big manufacturers like Ford and General Motors from selling directly to consumers and bypassing dealerships. The fear was the big manufacturers would undercut the dealers on prices, drive them out of business and lessen competition.

Since then, more car companies have sprung up across the globe and their dealers have become politically powerful — hiring many people, contributing to charities, paying property taxes, and collecting state and local sales taxes and fees.

Car dealers also contribute to political campaigns. And across the country, they have worked to keep out direct manufacturer sales, which means nearly all new cars, foreign or domestic, sold in the U.S. are sold through dealers. Popular foreign carmakers such as Toyota, Volvo and Honda have partnered with many dealers to sell their products, so you get dealers that sell, say, both Fords and Hondas.

Tesla has sold about 58,000 cars in the U.S. despite the $70,000 price tag. The company faces many challenges, such as persuading consumers to spend that much and to buy electric vehicles, and getting enough charging stations up and running across the country. But selling cars the way it wants is also a big issue.

Winning the “right to distribute the cars directly to consumers” is one of the company’s biggest challenges, Daniel Crane, associate dean of the University of Michigan Law School, wrote in a February paper. “Tesla is fighting a multi-state, multi-front battle in state legislatures, regulatory commissions, and courts just for the right to distribute and service its products,” he said.

It’s a battle, Crane said in an interview, that Tesla eventually will win.

“State by state, this is being confronted,” he said, and the majority of states have not blocked Tesla.

The West Virginia law signed this year by Gov. Earl Ray Tomblin, a Democrat, says vehicle manufacturers may not “act in the capacity of a new motor vehicle dealer” or operate a dealership, or even display a vehicle unless the display is part of an auto trade show with other dealers.

The bill was sponsored by state Sen. Mike Woelfel, a Democrat, but much attention was paid to state Senate President William Cole, a Republican who didn’t vote on the bill. He’s a car dealer in West Virginia and Kentucky. Tesla officials, environmental websites, green car blogs, automobile magazines and others have all attributed the ban to Cole’s influence.

“It was no surprise in West Virginia,” said Jim Chen, vice president of regulatory affairs for Tesla, in an interview. “The new Senate president is a car dealer.”

But Woelfel, in an interview, said it wasn’t Cole’s doing, and pointed to the unanimous support the measure received in the Senate to suggest Cole’s influence wasn’t needed. Cole’s spokeswoman, Jacque Bland, said neither he nor anyone in the office would comment on the Tesla bill.

The West Virginia Automobile & Truck Dealers Association, however, already had made its presence known. In addition to testifying for Woelfel’s bill at legislative hearings, the trade association gave $419,608 to 331 different West Virginia officeholders in 15 years, including both Democrats and Republicans in the Legislature, according to the National Institute on Money in State Politics, which tracks state political contributions. By contrast, the West Virginia Association of Realtors gave about half as much in 14 years.

Woelfel said his bill was not meant to exclude a specific auto manufacturer. “We welcome new businesses in our state,” he said. But he said Tesla was not willing to set up a traditional dealership, with new sales, used car sales and a repair facility like old-school dealers. “Our dealerships … do a lot of good in the community,” Woelfel said.

Tesla’s Chen said the old-fashioned dealership model doesn’t work for his company, which is based in California. Tesla customers spend hours just learning about how an electric car works before they ever decide to buy one, he said.

In addition, he said, while traditional dealers make much money on service and repairs, repairing Teslas is not very lucrative. Each vehicle has an eight-year warranty, and with fewer moving parts, there’s less to repair. Repairs are handled at centralized sites, not individual dealerships.

“You do need to change tires,” Chen said, “but there’s so much less that can go wrong. With the service network we have now, we have more than enough.”

West Virginians can still buy Teslas. They just have to go to neighboring states like Maryland, Ohio and Virginia, or to the District of Columbia, to do so.

Some states, led by Oregon, are experimenting with changing that and charging a “road usage” tax that would collect taxes from drivers of electric cars to compensate for the diminishing revenue from per gallon gas taxes.

Tesla Wins Some, Too

Tesla has had some recent successes. The company got permission to sell direct with new laws in New Jersey, Maryland and Georgia last year. Chen said those states acted on different philosophies: Maryland, generally a liberal state politically, liked the emissions-free technology of electric cars, he said, while conservative Georgia was more motivated by the ideas of free markets and competition.

Tesla also has won several court cases granting it permission to sell cars directly. A Massachusetts court ruled that traditional auto dealers did not have standing to bring a case against Tesla. A New York court said the dealers could not prove sufficient injury from the competition.

The Federal Trade Commission has backed the direct-to-consumer sales model, adding it’s not just about Tesla. In a blog posted on the FTC website, agency staffers said consumers “may benefit from the ability to buy cars directly from manufacturers — whether they are shopping for luxury cars or economy vehicles.”

The FTC officials also weighed in on the debate this year in Michigan, home to Ford and GM and where lawmakers were considering a plan by Elio Motors — which plans to manufacture a low-cost, high-mileage, three-wheeled vehicle — to sell its cars directly to buyers for a base price of $6,800. The Elio sales are “likely to promote competition and benefit consumers,” the FTC wrote in a letter to state lawmakers.

But a study by the Phoenix Center for Advanced Legal and Economic Public Policy Studies, a conservative think tank, said direct auto sales by manufacturers would result in higher prices to consumers as competition from manufacturers drives out local dealers.

Undeterred, Tesla will be renewing some of its battles in 2016. “We’re heading back to Michigan and Connecticut,” Chen said. “There’s a strategy to be developed.”

Despite this year’s bill, Tesla may not be shut out of Michigan forever. Snyder still is “very open to discussing” the business model of car sales in the state, spokesman Dave Murray said in an email.

“We should always be willing to re-examine our business and regulatory practices with an eye toward improving the customer experience for our residents and doing things in a more efficient and less-costly fashion,” Murray said.