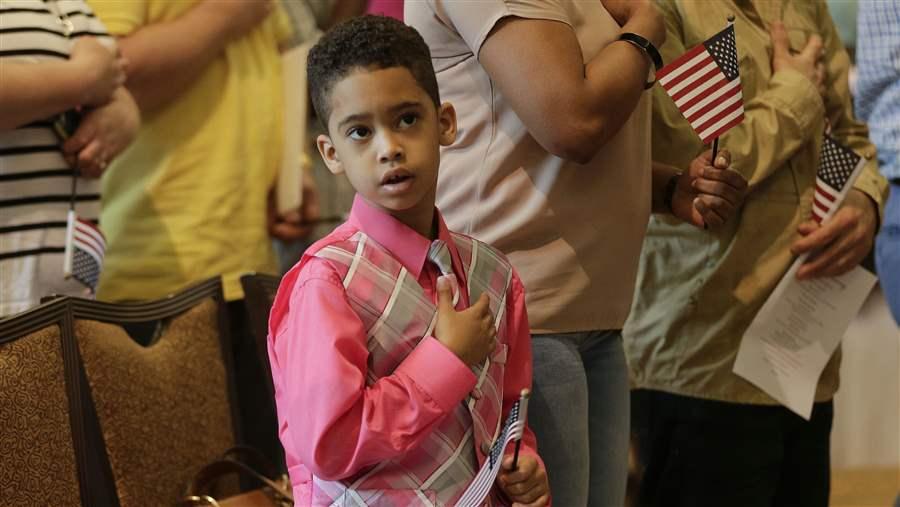 An immigrant from the Dominican Republic at a naturalization ceremony in New York City. Young immigrants burden public schools, but add to a state’s economy and tax base in the long run.

As a teenage refugee from war-torn Bosnia 20 years ago, Ned Halilovic asked for a small, safe place to live and ended up in West Fargo, North Dakota.

Few in town spoke his language, and Halilovic spoke no English. He started high school within a week of arriving and so he needed to learn the language of his new country. He got his diploma in 18 months.

“I set out to learn 20 words a day,” Halilovic, now 37 and a college graduate, said. “That was my goal, starting with ‘table,’ ‘chair.’ When you are forced to do it, it goes much smoother, much faster.”

New, young immigrants remain a constant in North Dakota and South Dakota. Immigrants there are the youngest in the country, with a median age of 34. And more than in any other state, they are new arrivals, having come to the U.S. after 2010. They often speak little English, like Halilovic.

And the states are investing millions of dollars in helping these new immigrants learn English and acclimate to American culture, hopeful that it will pay off with economic activity. Halilovic’s cleaning business in West Fargo employs 72 people, many of whom are young immigrants.

Having an immigrant population that is younger often means the newcomers are contributing to a state’s workforce, which can increase the tax base. But it also can mean young families that have children. And that can burden public schools, which are obligated to teach students who don’t speak English.

Having an immigrant population that skews older can mean a state has a greater percentage of immigrants who have aged out of the workforce and may need help with health care, housing and retirement — though not always.

Hawaii and Florida have the oldest immigrant populations in the nation, with median ages in the late forties. They have been receiving immigrants — in Hawaii, many are from Asia, and in Florida, many are from Cuba — in large numbers for more than 50 years. And the immigrants have settled in enclaves where many speak the same language or share the same culture.

Immigrants in Hawaii and Florida also tend to be more affluent than immigrants in other states. Eugene Tian, an economic analyst at Hawaii’s Department of Business, Economic Development & Tourism, said immigrants are generally as well off as Hawaiians who are born there.

In Florida, older immigrants have been a boon to the housing industry, which has struggled since the mortgage crisis hit in 2007.

“Those folks have been doing a lot of homebuying and in a lot of cases they’re paying cash,” said Christopher McCarty, director of the Bureau of Economic and Business Research at the University of Florida. Affluent immigrants, he said, see Florida as a good investment and a good destination with Hispanic-friendly communities.

In contrast, many of the immigrants arriving in the Dakotas are like Halilovic. They don’t speak English and have no long-standing immigrant community to move into. As a result, they often need to learn English, assimilate to American culture and enter the economy more quickly.

“Immigrants who find relatively few of their compatriots living in the United States typically have a stronger incentive to make the U.S.-specific investments that will allow a wider range of social and economic exchanges,” George Borjas, an immigration economist at Harvard University who was born in Havana, wrote in a study last year.

Having children, and parents, who don’t speak English can tax school systems.

Schools in Sioux Falls, South Dakota’s largest city, spend $5.3 million annually on staff and programs for children who don’t speak English or are only learning it. There are too many languages for a bilingual approach, said the schools’ spokeswoman, DeeAnn Konrad.

The schools are often unable to find interpreters for children or parents, so teachers and support staff must fall back on nonverbal communication, such as pointing.

“With more than 70 different languages represented in the district, we cannot translate communications for all families,” said Ann Smith, who supervises programs for immigrant children there. “Our school-home liaisons make personal contact to explain test scores and report cards. Our liaisons are not necessarily bilingual but have incredible skills communicating without words.”

Cultural differences can stand in the way of learning, too. Some of the newest immigrants to Sioux Falls, like the Kunama people from Ethiopia and Eritrea, need some coaxing to see the value of reading and writing.

“Our Kunama neighbors place a high value on face-to-face, spoken communication,” Smith said. Other newcomers include children from Nepal, Bhutan and Burundi, including some Hindus who do not eat beef, putting new strains on cafeterias.

“Food, in general, can be a challenge when you integrate people who are used to a rice- and vegetable-based diet into the Midwest, where all meals center around beef and potatoes,” Smith said.

Although many in the decades-old immigrant waves, like those in Hawaii and Florida, are financially secure, many in the newer waves, from rural Mexico and Central America, aren’t. And some scholars who study the issue foresee a financially troubled, older immigrant population that the country will have to deal with.

Immigrants who arrive later in life are more likely to be financially troubled than those who arrive at an earlier age, according to a 2013 study by the Population Research Bureau. And their number is growing: Six million immigrants age 65 or older lived in the U.S. last year, more than double the 2.7 million in 1990.

Older immigrants also are more likely to be poorer than Americans who were born here and are unlikely to catch up to them financially, the study found, which means they aren’t as likely to be able to retire. They will have to work longer in life to make ends meet, and they won’t be eligible for public assistance, such as Medicaid, unless they become citizens.

Most new immigrants older than 60 are sponsored by their children under visa programs that allow immediate family members to join them legally, said Janet Wilmoth, director of the Aging Studies Institute at Syracuse University.

Federal immigration data show more than 64,000 immigrants arrived last year as parents of U.S. citizens, mostly from Mexico, India and China. Similarly, Florida has seen the number of older immigrants arriving from Cuba grow sixfold between 2010 and 2015, according to state records. Most said they were doing so to rejoin family.

Older immigrants also are a “potentially vulnerable population,” Wilmoth said, because of limited English and a lack of U.S. work experience, and can often become isolated, depressed and dependent on family members.

New York has one of the oldest immigrant populations, with a median age of 46, compared to 34 for residents born in the U.S. In some urban areas, public resources like senior centers are strained.

Last year, for instance, elderly Koreans in Queens protested that senior centers were too far away from them, and they were forced to use a McDonald’s restaurant in Flushing to socialize. State Assemblyman Ron Kim, a Democrat, brokered a settlement including more buses to transport them to far-away senior centers.

The older Asian-American population in the city is growing fast and, Kim said, “is in dire need of not only more senior centers but more senior housing and more social space.”