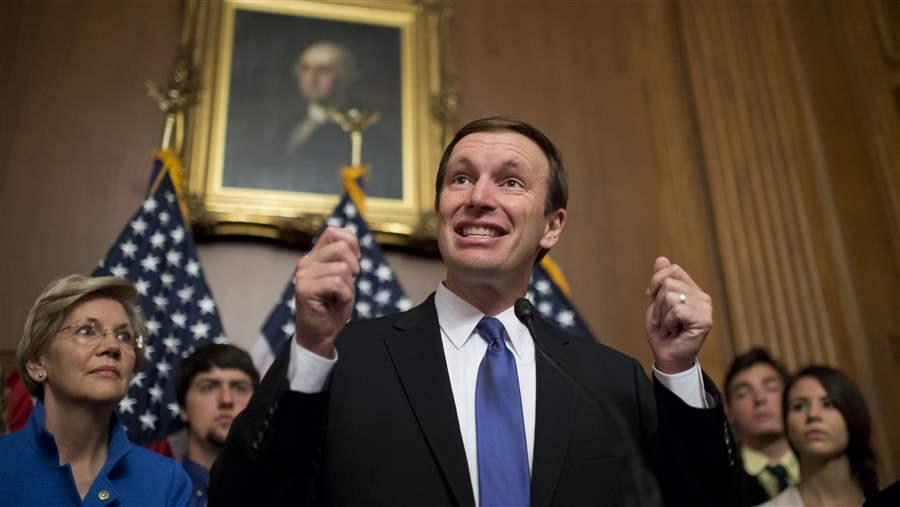 Sen. Chris Murphy, a Connecticut Democrat, lends his support to a bill that would allow the federal government to refinance student loans. As his home state shows, there’s plenty states can do to help borrowers in the absence of federal action.

Ali Sinicrope and her husband would like to buy a house, but they’re not sure they can afford it. They’re public school teachers in Middletown, Connecticut, and they owe $80,000 in student loans.

Connecticut lawmakers want families like the Sinicropes to spend less on student loan payments and more on everything else. Starting next year, the state will offer a refinancing program that’ll allow some borrowers to save money by lowering the interest rates on their loans.

“The burden of this debt is a real millstone around the neck of our economy, and we need to address it,” said state Rep. Matt Lesser, a Democrat who represents Middletown. Almost 18 percent of Connecticut residents who have a credit file have student debt — $31,100, on average, according to the Federal Reserve Bank of New York.

Although the federal government dominates the student loan market, there’s much states can do to help borrowers who are struggling.

States have long recruited doctors, dentists and teachers to underserved areas by promising to forgive or repay their student loans. Now, some states are establishing refinancing programs. Connecticut has gone further this year. Not only did Democratic Gov. Dannell Malloy sign a law creating a refinancing program, he also signed one that laid ground rules for student loan servicers and created a student loan ombudsman’s office that will advise borrowers.

Such efforts won’t stop college costs from rising. The University of Connecticut’s trustees meet this week to decide whether to raise tuition by 31 percent over four years. The state flagship says it needs to boost tuition partly to offset reductions in per-student state funding.

Lesser said lawmakers need to find ways to fund state higher education systems and slow tuition growth. But for many Americans, he points out, the damage already has been done.

Nationwide, Americans owe about $1.3 trillion in student debt. Last year, 35 percent of student debt was held by borrowers over age 40, according to the New York Fed.

Most Americans rely on student loans to pay for bachelor’s degrees and graduate studies. In 2011, 68 percent of students who’ve been in college for four or more years reported having taken out a student loan — primarily federal loans, according to the most recent data from the National Center for Education Statistics.

A generation ago, many Americans got their federal student loans through states. Almost every state had an office that issued federally guaranteed loans. After the U.S. Department of Education began issuing loans directly in 2010, some state student loan authorities closed their doors.

Eighteen states, including Connecticut, still issue student loans through their own student loan authorities (or in North Dakota’s case, a state bank), according to the Education Finance Council, a trade group. State agencies generally finance their loans by selling low-interest, tax-exempt bonds.

It’s hard to get a better deal on a loan than a subsidized, federal undergraduate loan. Right now, they’re available at a 4.29 percent interest rate, and the federal government pays the interest while borrowers are in school. Loans for graduate students are pricier, as are federal parent loans. Private loans can be expensive, as can older federal loans, issued before the financial crisis.

“We had people coming to us with federal parent loans that were 7.9 or 8.5 percent fixed,” Kelley said of the interest rates he saw. Borrowers with old loans issued by the Rhode Island agency also wanted to know if they could refinance.

RISLA launched its program 18 months ago. So far, the authority has refinanced loans for 349 borrowers, primarily people who live in Rhode Island or went to college there. For now, it’s paying for the program with taxable bonds.

Lauren, a Rhode Island teacher who didn’t want to disclose her last name because she’s revealing personal financial information, refinanced a private student loan through the program last year. “I’ve been repaying for seven years,” the 29-year-old said of her debt. She chose the lowest-cost option: a five-year loan that can have an interest rate as low as 4.24 percent.

For states that already have a student loan program, setting up a refinancing program costs next to nothing. RISLA didn’t need legislative approval to get started. Connecticut’s program, created by law earlier this year, will begin with a pilot funded by transferring $5 million from one of the student loan authority’s subsidiaries.

But Who Will Benefit?

State refinancing programs tend to be open to more borrowers than programs offered by banks or other private lending companies, said Debra Chromy, president of the Education Finance Council, a national association. Still, refinancing isn’t for everyone.

Lenders have to be reasonably sure that borrowers will repay their loans. This year, a Goldman Sachs report estimated that about $211 billion in student loans could be eligible for refinancing. That’s a lot of money, but only enough to cover less than a fifth of outstanding student loans in the U.S.

Unlike some private companies, the Rhode Island authority will work with borrowers who have missed a few loan payments. But its refinancing program does require borrowers to earn at least $40,000 a year and have a FICO credit score of at least 680. Nationally, most people under 30 have a FICO score below 700.

And refinancing may not be the best option for all borrowers. Teachers like Lauren and the Sinicropes, for example, may be able to wipe out part of their debt obligation by qualifying for federal loan forgiveness, depending on where they teach and how long they plan to stay there.

In Wisconsin, Republicans have resisted Democrats’ push to create a student loan refinancing authority. In May, Republicans on the Joint Finance Committee argued that students should consider whether their degrees will pay off before taking on debt, according to The (Madison) Capital Times. The head of the state Higher Educational Aids Board said establishing the program could create a false sense of security for students.

Refinancing programs primarily benefit borrowers who are surviving without help. Think middle-class professionals like the Sinicropes, who took on debt to go to a private graduate school and are managing to stay on top of their payments.

But surviving isn’t the same as thriving. Lauren from Rhode Island said she’s lucky she can afford to make her payments, but handing over the money still stings. “I just imagine all the things I could be doing with that money, and it makes me sick sometimes,” she said.

“This is largely going to help people who are already paying their loans and have a strong credit record, but they might be able to save some substantial money — enough for them to pay a down payment to buy a home, or save up to start a small business,” said Rohit Chopra, former student loan ombudsman at the federal Consumer Financial Protection Bureau.

Ali Sinicrope estimates that it’ll be years before she and her husband have paid off their debt. Their education expenses probably won’t end there: in six years, their twin sons will graduate from high school. “That’s going to be two college tuitions at the same time,” she said.