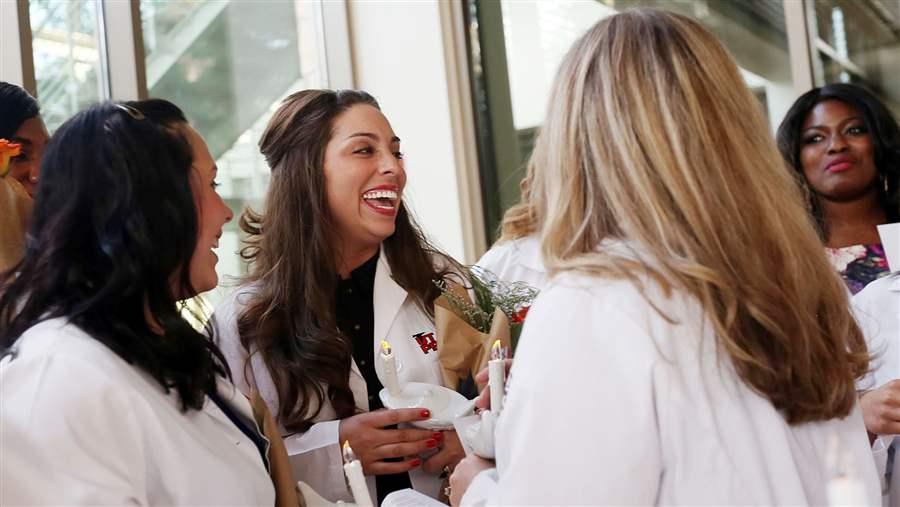 Nursing graduates at the University of Texas. In half the states, one state license is all a nurse needs to practice in the others. Several medical professions are moving to license portability.

When it comes to licensing, the nursing profession works almost exactly the way it does with driving a car — at least in half the states. A nurse with a license from one of those 25 states can practice in any other state that has signed on to a reciprocal licensing compact.

Contrast that with doctors. A doctor licensed in one state who wants to practice in another still needs a license from the other state. That’s a costly and time-consuming process, especially in an era when many health plans and their employees operate across state lines and the use of telemedicine, in which patients and their providers interact from a distance, is growing.

But the state licensing situation for doctors and other health care professionals — psychologists, social workers, physical and occupational therapists, and mental health counselors — is starting to change.

Doctors, for instance, are creating their own multistate compact. It won’t go as far as the nurses’ agreement, which grants reciprocity to practice in each state that signs on. But it will provide an expedited application process to get licenses in other states.

Other health professions are moving in the same direction — a recognition that Americans are mobile and there’s a need to increase patients’ access to health care.

“There is just a greater recognition that this is the world we live in today and that the medical professions have to adapt to the way health care is delivered today,” said Colmon Elridge, director of the National Center for Interstate Compacts of the Council of State Governments, a public policy organization that works with several of the medical professions on the design of their license portability plans.

The main obstacle to portability for all the professions is that they are regulated by the states, each of which is free to demand its own qualifications — and collect its own fees — for licensing. To achieve portability, states either have to standardize their licensing requirements or agree to live with the differences, so long as there are some baseline qualifications accepted by all.

The system in place for nurses in 25 states is the model for professional licensing portability among health care professions because it grants reciprocity to practice in participating states without getting a license.

It grew out of a 1990s trend of nurses becoming heavily involved in answering health questions on telephone hotlines, with calls often originating from other states, said Jim Puente, director of the Nurse Licensure Compact with the National Council of State Boards of Nursing (NCSBN).

That raised questions about whether they were licensed to deal with out-of-state patients, and helped prompt the formation in 2000 of the Nurse Licensure Compact for registered nurses, licensed practical nurses and licensed vocational nurses.

Creating a multistate compact was easier for nurses than some other health professions, Puente said, because nurses take the same licensing exam in every state and states’ licensing requirements are mostly uniform.

Under the compact, a nurse’s license can only be suspended by the state in which the nurse resides. But compact states have a disciplinary mechanism that allows one state to conduct an investigation into the actions of a nonresident nurse operating in that state and take action, including barring that nurse from working in the state.

The NCSBN is about to launch a separate compact for advanced practice registered nurses, those with advanced degrees who often work in specialty areas of medicine or are allowed to see patients without a doctor’s supervision.

The Federation of State Boards of Physical Therapy this year decided to pursue a model similar to what nurses have and plans to start introducing legislation in states next year. And because emergency service personnel often cross state lines in natural disasters, the National Association of State EMS Officials plans to start pushing bills next year to establish a reciprocity compact.

The American Occupational Therapy Association and the Association of Social Work Boards are just beginning to consider their own compacts, but they haven’t settled on a model.

Doctors chose not to seek a reciprocity agreement among the states as the nurses have, although a version of one does exist: A doctor licensed in any state can practice in any facility operated by the U.S. Department of Veterans Affairs.

There are stumbling blocks to reciprocity between the states for doctors’ licenses, including varying requirements and concerns that states won’t be able to discipline doctors from other states or fully investigate doctors accused of violating their standards.

Instead, the doctors have created a compact that the Federation of State Medical Boards (FSMB) says will offer an expedited and cheaper process for getting a license to practice in member states. So far, 11 states have joined the compact, with nearly an equal number expected to join next year. Telemedicine advocates and doctors who use telemedicine say the doctors’ portability model, which still requires full licensure in every state, will impede the spread of telemedicine, particularly in rural areas that have a shortage of doctors.

“If you still require a doctor to be licensed in every state, in practical terms, you’re still putting brakes on the use of telemedicine,” said Gary Capistrant, chief policy officer of the American Telemedicine Association.

But the federation of medical boards says a reciprocal licensing scheme would diminish the ability of states to regulate medical practices within their own borders.

Lisa Robin, chief advocacy officer for the FSMB, said in most cases, nurses operate under the supervision of doctors. By contrast, she said, doctors operate independently. “It is therefore critical that medical boards are aware of which physicians are practicing in their states, as well as have oversight over those providing care to patients in the state where the practice occurs,” Robin said.

On the other hand, even the conservative compact adopted by the FSMB is opposed by the Association of American Physicians and Surgeons, a right-leaning advocacy group, which is concerned that any kind of license portability would make it easier for doctors who perform abortions to cross state lines.

Other health professionals are seeking ways to trim what can be an arduous licensing process for people who want to practice across state lines.

Mental health counselors, for instance, have a system in 10 states plus the District of Columbia that allows a licensed counselor from one participating state, with five years of practical experience and no disciplinary actions, to apply for a license in another state without the need for further review of their educational background, supervised training and experience. Pharmacists operate a similar model.

Dr. Mark Cunningham, a clinical and forensic psychologist in Texas, may be the poster child for medical professionals’ call for portability.

At the peak of his practice in 2013, he had licenses to practice psychology in 22 states. Obtaining and maintaining all those licenses was neither easy nor cheap for Cunningham, a psychologist board-certified in both clinical and forensic practice who often travels to other states to provide expert testimony in legal matters.

The cost of acquiring and maintaining all those licenses was astronomical, Cunningham said. He said it cost him $400,000 over about ten years in licensing and renewal fees, continuing education courses, travel to states to sit for examinations, clerical and administrative time, and lost billable hours.

Cunningham, whose case is an extreme one because he’s an expert witness, has a little relief now.

Licensed psychologists with at least five years’ experience, and no disciplinary action against them, can receive a Certificate of Professional Qualification from the Association of State and Provincial Psychology Boards (ASPPB). In 33 states plus D.C. that serves as a baseline confirmation of a psychologist’s educational background, supervised training and passing grade on the national psychology exams and makes it faster and cheaper to navigate the licensing process in other states.

Many states now also offer out-of-state psychologists the option of obtaining a temporary license, enabling them to practice for five to 30 days a year.

And the ASPPB is working on another compact that would enable a licensed psychologist from one state to practice telemedicine in another state without the need for a license from that state. Stephen DeMers, ASPPB’s CEO, said he expected some legislatures to consider bills pertaining to that compact next year.