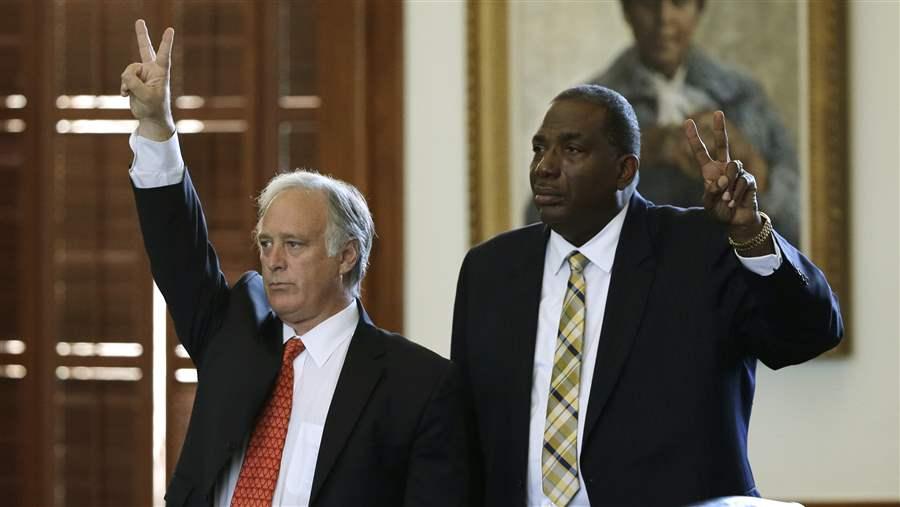 Democratic state Sens. Kirk Watson, left, and Royce West, both lawyers, vote in the Texas Capitol. More than a fourth of Texas state legislators are lawyers, among the highest rates in the nation.

When state Sen. Elder Vogel Jr. isn’t in session with Pennsylvania’s 49 other senators, he’s out on his 400-acre farm with about a hundred cattle.

Vogel, a fourth-generation dairy farmer, is the lone farmer in the Pennsylvania Senate. And he’s indicative of a dying breed in state legislatures across the country. Unlike 100 or even 40 years ago, farmers now hold few seats and have little voice in legislatures — even in farm belt states.

The share of lawmakers who work in agriculture is half of what it was in 1976. Since then, the percentage of farmers has fallen from 9.7 to 4.6 percent, according to a new survey of the composition of the nation’s 50 state legislatures by Stateline and the National Conference of State Legislatures (NCSL).

Even traditional agricultural states have seen the percentage of legislators who consider themselves farmers fall off. North Dakota, which had the greatest percentage of farmers at 42 percent in 1986, experienced the largest drop. Now, 23 of 141 legislators, or 16 percent, are farmers.

Vogel, a Republican and the chairman of the Pennsylvania Senate Agriculture & Rural Affairs Committee, worries that independent farmers won’t have a voice inside legislative committees, and on state House and Senate floors.

“Without someone there to say, ‘Whoa, let’s take a second look at this, this might not be the best thing for farmers,’ we’re going to get steamrolled,” Vogel said.

Farmers aren’t the only ones holding fewer seats than they used to. The percentage of lawyers serving in statehouses dropped from 22.3 percent in 1976 to 14.4 percent this year.

Lawmakers with business backgrounds hold the biggest share of seats. The survey found 29.5 percent of legislators are business owners, or are in accounting, insurance, real estate or other business fields. In all, 55 percent of state legislators nationwide work in business, are lawyers, or say lawmaking is their main profession. In 1976, 61 percent of legislators were in those fields. Since then, the percentage of lawmakers from other professions, such as consulting or nonprofit work, has grown.

But legislators say their occupation influences their policymaking more than their education does. And what they do for a living ranges greatly by how much they are paid in the legislature, when they are in session and the main industries in their state.

The migration of the population from rural areas has contributed to the decline of farmer-legislators, said Chris Mooney, director of the Institute of Government and Public Affairs at the University of Illinois.

As the U.S. shifted to mechanized agriculture, people moved off farms into urban areas, Mooney said. Then, in the 1960s and 1970s, the U.S. Supreme Court mandated that all state legislative and U.S. congressional districts be redrawn and that equal populations be represented in each district. That meant fewer districts in rural areas.

Despite the decline in the number of farmer-legislators, states that count agriculture as their leading industry still have more legislators who work in farming, ranching or food processing than other states. In Nebraska, for instance, 22 percent claim agriculture as their occupation. Many also say they work in agriculture in South Dakota (17 percent), Iowa (14 percent) and Idaho (13 percent).

But even those numbers may be deceptive. “Legislators like to call themselves farmers, even though they may rent out the farm,” Mooney said. “It’s good politics, in some districts.”

It is highest in New Jersey, where 36 of 120 legislators, or 30 percent, are lawyers, according to the Stateline-NCSL survey.

There are so many lawyer-legislators in the state that not being a lawyer could win you an election for being “different,” said John Weingart, associate director of the Eagleton Institute of Politics at Rutgers University.

The states with the smallest share of lawyers generally are ones that pay lawmakers little for serving. In New Hampshire, where legislators earn $100 a year, just 13 of 424 legislators, or 3 percent, are lawyers, the lowest percentage in the nation.

But not every low-paying state has a dearth of lawyers. That may be because lawyers’ flexible schedules allow them to serve, said Peverill Squire, a political science professor at the University of Missouri. Squire has been studying the makeup of state legislatures for more than three decades.

In Texas, for example, legislative pay is among the lowest in the nation at $7,200 a year. Yet, 27 percent of legislators are lawyers.

Texas’ regular legislative session convenes for six months every other year, so lawyers can serve without it intruding on their law practices, said Sherri Greenberg, director of the Center for Politics and Governance at the University of Texas. Greenberg was a Democratic state representative in Texas from 1991 to 2001.

“One of the main things is that people who can afford to run, run,” she said. “They have jobs where they can come and go, whether it is consulting, or law.”

With all the lawyer-legislators in New Jersey, 60 percent of the Garden State’s legislators have advanced degrees, such as a juris doctor, a master’s or a doctorate. That’s the highest of any state.

Legislators are most likely to have diplomas in Texas, Nebraska, California, New York and Ohio. In those states, 85 to 93 percent of lawmakers have a bachelor’s or higher. Legislators are least likely to have a bachelor’s or higher in Maine and New Hampshire, where less than half of lawmakers have a diploma.

One caveat: The educational data is incomplete. The survey was not able to capture information for 23 percent of legislators nationwide. Researchers compiled the data from an NCSL database that gathers information from legislative websites, by reviewing individual legislators’ websites, and by contacting legislatures’ central offices.

In states with full-time legislatures, a large share of legislators — 65 to 88 percent, depending on the state — have a bachelor’s or higher. In part-time states, the range is 44 to 82 percent.

The survey also found that the more populous the state, the more educated the legislator.

In states with more than 10 million people — California, Florida, Georgia, Illinois, New York, Ohio, Pennsylvania and Texas — the proportion of legislators who report having a bachelor’s or higher is quite high, ranging from 74 to 93 percent. That share is lower, 55 to 73 percent, in states with fewer than 1 million people — Alaska, Delaware, North Dakota, South Dakota, Vermont and Wyoming.

Just how much legislators’ educational backgrounds affect their policymaking is unclear. At the least, a higher education may help lawmakers understand the complicated legislative process, said Squire, of the University of Missouri.

“Government policy has so many layers,” he said. “Education helps people develop the critical thinking skills they need to make decisions.”

Mooney, at the University of Illinois, said legislatures were never set up so that representatives had to be experts or even highly educated.

“We don’t have a system of philosopher kings,” he said. “It’s a democracy. We select people who represent the voters. Not all the people are geniuses, and not all the legislators are geniuses.”

In Delaware, 21 percent of lawmakers don’t have a bachelor’s, more than any other state.

Delaware Rep. Daniel Short has an associate’s from the University of Delaware. He’s also a business owner and an insurance agent. And he’s a leader, the House minority leader.

Short, a Republican, said a legislator’s work experience is just as beneficial as higher education. People are also educated by more than just four-year colleges: they are educated by outside courses, seminars and life experience, he said.

For instance, he said, having the experience of owning your own business teaches much. And that’s especially true right now in Delaware, where he said the Legislature soon will consider three new taxes.

“When you talk to a small businessperson who is running that business every day, they will have a keen sense of how those tax increases are going to impact him,” he said.

Rise of Other Occupations

As the proportion of farmers and lawyers in legislatures has declined, the representation of other professions — such as consultants and nonprofit workers — has risen since 1986, from 3 to 8.2 percent.

One less common career that has seen the slightest of upticks is clergy, which 30 years ago comprised 0.4 percent of legislators, and now comprises 0.8 percent.

South Dakota saw no clergy serving in 1986, 1993 or 2007. Now, it has four members of the clergy serving in Pierre, said state Rep. Scott Craig, who is a pastor at BigHorn Canyon Community Church, in Rapid City.

South Dakota has the highest percentage of clergy-legislators, with 3.8 percent. South Carolina is second, with 3.6 percent.

Craig, a Republican, would like to see the number grow. He works with the Family Research Council, a conservative Christian advocacy group and lobbying organization, to encourage people of faith to run for office.

Pastors are a “hand and glove fit” for office, he said, as they already know how to persuade the masses. “You know what is right and what is wrong,” he said. “You represent the voice of the people.”