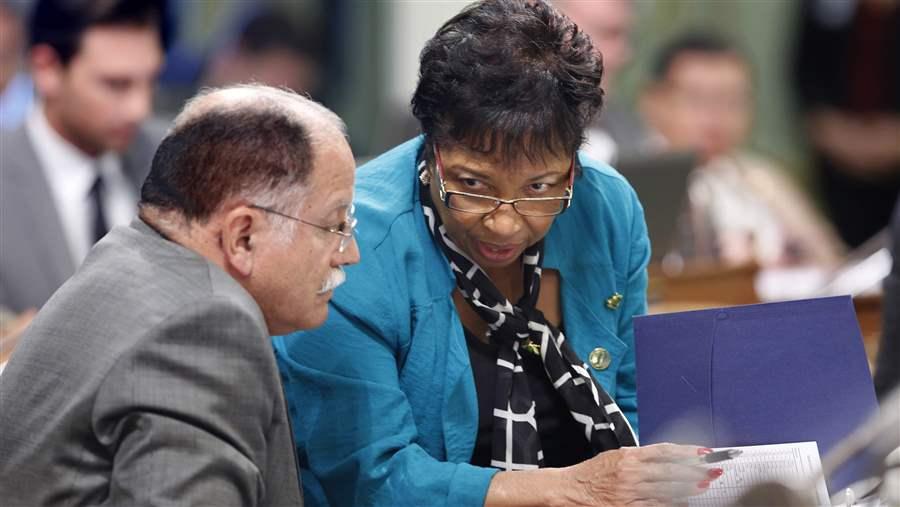 Democrats Jose Medina and Cheryl Brown, both members of the California State Assembly, confer during a session in Sacramento. California’s state legislators are among the most diverse in the country.

The mailer circulated in Roanoke, Virginia, just days before the election, with a message candidate Sam Rasoul had been dreading: It accused Rasoul, a practicing Muslim, of being funded by an al-Qaida sympathizer.

Rasoul, a Democrat who grew up in Roanoke, feared the worst. But he went on to win the election with 70 percent of the vote, becoming one of two Arab-Americans in the Virginia Legislature. He is convinced that he was able to overcome the smear campaign because of the time he had spent knocking on thousands of doors, introducing himself to potential voters.

“That 20-second interaction makes you a human being, even if they don’t like your politics,” Rasoul said. “By the time that mailer hit, people knew me. People said, ‘You can call him a tax-and-spend liberal, you can call him an Obama lover. But you can’t call him a terrorist.’ ”

Rasoul’s triumph in a majority-white district — it’s 60 percent white, with hardly any Arab-Americans — makes him unusual.

Rasoul’s victory aside, research shows that in local elections, voters tend to vote for candidates who look like them. That is a problem when a large proportion of minority voters are lumped together in a handful of districts. Such clustering increases the chances of there being at least a few minority legislators, but makes it less likely there will be very many of them.

States draw their state legislative and congressional districts based on the latest census numbers. Each district is supposed to be compact and contiguous, and to contain roughly the same number of people.

But the rules are not precise, and often lead to odd geographic constructions designed to benefit one party or the other. A number of states have been sued for “racial gerrymandering,” accused of packing minority voters into a handful of districts to limit the number of representatives they can elect. Earlier this year, for example, the U.S. Supreme Court ruled that Alabama’s redistricting plans weakened the political power of African-Americans in the state.

In many states, political candidates belonging to racial or ethnic minorities often end up running against one another in a single, minority-packed district.

Another factor that depresses minorities’ strength in state legislatures is economics: Few first- and second-generation immigrants can afford to get by on a part-time legislator's salary — or have the kind of careers that will afford them the flexibility to serve in office, according to Sayu Bhojwani, founder and president of the New American Leaders Project.

The same is true for native-born blacks and Latinos, said Chris Rabb, an African-American author and consultant who is running for Pennsylvania state representative. (Pennsylvania’s state Legislature is one of a handful in the country that is full time.)

“If you’re a black person trying to run for office and you’re in a densely populated district where it may require you to buy radio ads or put together a solid campaign team, where do you get that money?” Rabb said. Most new candidates either fund their campaigns with their own money or with family help, he said. “That is far less likely to happen in African-American households.”

Black, Latino and other minority candidates also often lack political connections, Bhojwani said. Finally, the lack of minority representation is self-perpetuating, because it’s harder for people to imagine running for the legislature if there aren’t any lawmakers like them.

Over the decades, research has shown, the relative lack of minority representation in statehouses has an impact on the legislation that is debated and approved, according to Rene Rocha, a political science professor at the University of Iowa who studies immigration, minorities and inequality.

“If you have more minorities in state government, you get policies that are a little more favorable toward minorities,” Rocha said. Legislatures with few minority lawmakers make “policies that are less responsive to minorities and can lower their political engagement.”

Meanwhile, Hispanics make up only 5 percent of state legislators, up from 2 percent in 1991, the earliest year for which statistics are available.

Much of the progress at the state level can be traced to the rapid growth of the Latino electorate, or court-ordered mandates to accommodate minority districts, rather than efforts to recruit candidates from racial and ethnic minorities or white voters’ willingness to elect minorities, said Kerry Haynie, associate professor of political science and African and African-American studies at Duke University.

“Blacks are still elected from districts that are predominantly black,” Haynie said. “Until there’s a time that blacks can run and win in districts that are not majority-minority, you won’t see significant increases in their representation.”

Rhina Villatoro of the National Hispanic Caucus of State Legislators called the lack of Hispanic representation in the legislatures “a key problem.” Latino legislators are, in many cases, “the voice … for a larger number of constituencies. They feel responsible for not just representing their district but serving the interests” of Latinos outside their district, Villatoro said.

But representation varies greatly by state. Southern states were once the home of Jim Crow and the poll tax. But now, they have some of the greatest diversity in their legislatures. Black legislators have the greatest presence in Alabama (24 percent), Georgia (25 percent) and Mississippi (28 percent).

One reason is the sheer size of the African-American population in those states: Mississippi, for example, is 37 percent black. Another reason is the “preclearance” provision of the Voting Rights Act. Under that provision, states with a history of racial discrimination needed to get permission from the federal government to enact any changes to their voting laws. As of 2013, nine states, mostly in the South, were subject to the law. But the U.S. Supreme Court struck down the provision in June of that year, and it’s unclear what effect the change will have on minority representation in those states.

Immigrants have traditionally gained power in the U.S. through politics, starting on neighborhood councils and school boards, moving up to city halls and statehouses, and then on to the national stage.

Ana Sol Gutierrez, a native of El Salvador, exemplifies this phenomenon. As a single mother of three, she was worried about immigrants from Central America fleeing civil wars back home. So she joined Jesse Jackson’s Rainbow Coalition and tried to help him get elected president. After the 1988 Democratic National Convention, she said, Jackson told his delegates, “We’re just getting started. Go back and get elected.”

“That was the first time anyone told me that public office was important,” Gutierrez, now 73, said. “I decided to jump in and run. And I won.”

In 1990, Gutierrez won a spot on the Montgomery County school board, becoming the first Hispanic elected to any office in Maryland. In 2002, she became the first Latina elected to the state Legislature, where she is currently serving her fourth term.

She worries, though, that there aren’t enough minorities being groomed for political careers. “We don’t have a bench,” said Gutierrez, who is now running for Congress. Many first- and second-generation Hispanics have relatives who come from countries where getting involved in politics can get you imprisoned — or worse.

A handful of groups, like Bhojwani’s New American Leaders Project and Latinas Represent (an initiative of the Hispanic Caucus), are focused on mentoring new political talent.

"Latinos, Asian-Americans, African-Americans, Arab-Americans — they can represent all of America, not just one segment,” Bhojwani said. “We’re an increasingly multiracial society. Working in ethnic silos is a carry-over from an old period in our country’s history. And it’s outdated.”