UNREPRESENTATIVE: THE DEMOGRAPHICS OF STATE LEGISLATURES, PART I 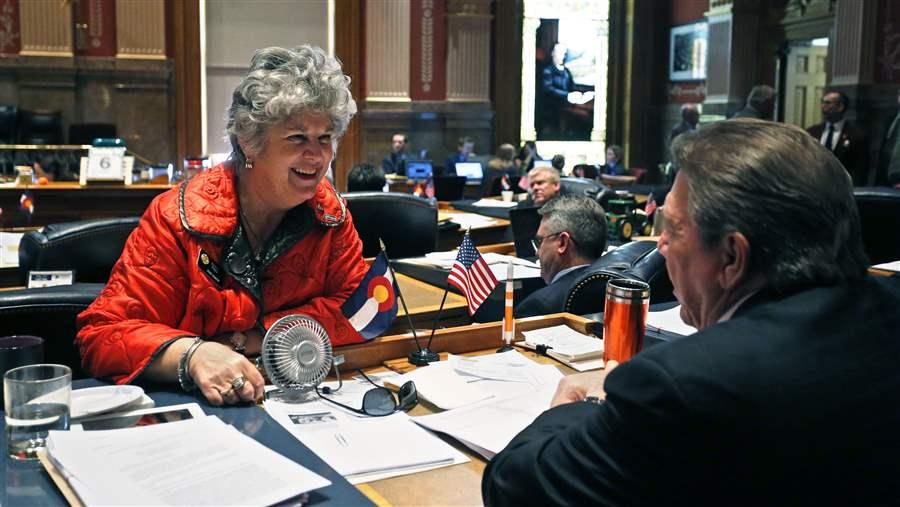 Colorado Democratic state Sen. Nancy Todd, left, talks with Republican state Sen. Ray Scott at the Capitol in Denver. Forty-one percent of Colorado’s state legislators are women, a higher percentage than in any other state except Vermont, which has the same percentage.

In 2015, female candidates for state legislative seats are just as likely to win as their male competitors. The challenge is getting them to run.

A quarter of the nation’s state legislators are women, according to a new survey of the composition of the nation’s 50 state legislatures by Stateline and the National Conference of State Legislatures. That’s up dramatically from the 5 percent figure of the early 1970s. But the percentage hasn’t budged much in more than a decade, prompting many to question what can be done to encourage more women to seek state elective office.

Party leaders are less likely to recruit female candidates — and women are less likely than men to run without being asked. Many younger women worry about balancing a political career with family obligations. And because Republicans have been less successful in recruiting female candidates, their recent dominance at the state level has contributed to the stalled progress.

It may not take a woman to speak up on issues that are important to women, but state legislators and researchers who have studied the issue say regardless of party, women often bring a different working style and more varied life perspectives to the legislative arena, in addition to a stronger focus on women, children and family issues.

Many political observers have credited women with helping to end the 2013 federal government shutdown, generally describing women as better at setting aside egos to get work done.

But even with the good qualities they may bring to politics, women tend to be more hesitant to seek office.

“Women just don’t wake up one day and look at themselves in the mirror the way men quite frankly do and say, ‘I should run for office,’ ” said Liz Berry, who recruits many candidates through her role as state president of the National Women's Political Caucus of Washington.

Jennifer Lawless, director of the Women and Politics Institute at American University, agreed. “Women don’t assess themselves the same way when deciding if they’re qualified for office,” she said. “They perceive themselves as being less qualified.”

Many women agree to run after being recruited, but that requires parties and state legislators to reach out to them. Most party leaders and legislators are white men, and when they look for recruits, they turn first to people like them.

Another challenge is that it takes more time to convince female recruits to take the plunge, which means recruiters have to be determined — and patient.

“When women first think about running up until the time that they actually run is about three years. For men, it’s about three weeks!” said Washington state Sen. Christine Rolfes, who helps recruit Democratic candidates in her state.

Many recruited women delay candidacies because they worry about how their families will be affected, especially if their children are young. Even as men take on a greater share of family responsibilities, research shows that in most households, women still bear the heavier load. Convincing them that they can balance their legislative, professional and family duties — not to mention addressing their concerns about unpleasant political realities like negative campaigning and constant fundraising — takes time.

Some state legislatures are full-time while others are part-time, but the structure of the legislature doesn’t have much impact on the percentage of female members. Either way, it’s a time commitment that many women are reluctant to make.

When she was first approached to run for office, Rolfes’ children were toddlers, and she said the thought of leaving them “made me sick to my stomach. But when they were a little older I was ready.”

Rolfes, whose children are now in high school, is one of the few female Washington state legislators with children at home. For women who want to rise through the political ranks, delaying a run until their children are older can be costly, because they don’t have as much time to earn the seniority that delivers real power — and often the chance to run for a higher office.

The percentage of female state legislators varies widely from state to state—but in no state do women make up close to 50 percent.

Walsh said women tend to do better in states where recruiting is focused more at the local, rather than the state, level, but there are geographic and cultural differences as well.

The Northeast and the West have had more success in getting women to serve as lawmakers. The Northeast has more citizen legislatures, where legislators represent fewer people, and the role isn’t viewed as a profession, so people cycle in and out more, Walsh said. In the West, the relatively high percentage of female lawmakers may have its origins in a settlers’ culture in which women and men worked side by side. Western states also were among the first to grant voting rights to women.

States legislatures in the conservative South, where traditional gender roles hold greater sway, have the lowest percentages of women.

Until recently, Republican Sen. Katrina Shealy was the only woman in the South Carolina Senate. Shealy said most of her colleagues have been respectful — but not all of them. Shealy’s said her neighbor on the Senate floor, Republican Sen. Tom Corbin, often made comments to her, once joking about her wearing shoes, saying women should be barefoot and pregnant. During a dinner where reporters were present, he referred to women as a “lesser cut of meat.”

“I always told him to stop, and I didn’t treat it like a joke, but I didn’t say anything else because I didn’t want to come off like I was whining because I was the only girl in the room, and I can’t take care of myself,” she said. But once his comments became public, “I had to respond because you have to say something for all the women that will come behind you.”

Shealy later addressed the Senate, saying, “These type remarks are never acceptable in public or in private. ... [W]hether the person speaking them thinks they are in jest or not, these words are hurtful and disrespectful. We are all created equal and, as such, deserve respect.”

A second female senator, Democrat Margie Bright Matthews, recently joined Shealy. Matthews was elected to replace state Sen. Clementa Pinckney, who was killed in last June’s mass shooting at a Charleston church. Shealy said she has reached out to Matthews to work on some of the children’s issues Shealy is most passionate about, hopeful that partnering on legislation will help it get passed.

Cary Brown, director of Vermont’s Commission on Women, credits the small size of the state’s districts for its relatively high percentage of female legislators. In tiny Vermont, women can campaign among their neighbors and don’t have to travel far to get to the Capitol. Nevertheless, few women there have been elected to a statewide or federal office.

“We have over 40 percent women in the state Legislature, but we’ve never sent a woman to Washington, so we’ve still got work to do,” Brown said.

In Washington, the percentage of female legislators has dropped, from 40 percent in 2001 to 33 percent now. “We stopped putting so much effort into recruiting, and it was a big mistake,” said Berry, of the women’s political caucus.

Kept on the Sidelines

In legislatures with few women, those who are elected say they are more likely to be kept on the sidelines.

While they may be present at committee meetings, women may not always be part of the socializing that takes place outside of the statehouse, where many informal decisions are made.

Just 13 percent of Wyoming’s legislative seats are held by women, and Democratic state Rep. Cathy Connolly is the only woman on the House Appropriations Committee. Her male colleagues have discussed getting together to play basketball before the meetings.

“Do I either go stomping around complaining about boys, or do I do something different? So I say, ‘Sure I’ll play, but only if I can be quarterback,’ ” Connolly joked. Though she’s not particularly interested in playing basketball, Connolly said she makes a point of accepting invitations for fear of missing out on important networking. “There are an awful lot of informal discussions and an awful lot of planning that happens in that environment.”

“There are a lot of networking and social situations where you get a lot of information and you can get a lot of support to get your bills passed,” said Craft, the only woman in the Wyoming Senate.

Craft said a female colleague in the House complained to her about returning to a committee meeting after a quick break, only to find her male colleagues had made some informal decisions on legislation.

“She joked, ‘Have you guys moved these meetings to the men’s room because if so maybe I should come too,’ ” she said.

Donna Boley, the only female state senator in West Virginia and a member of Republican leadership, said she feels respected by her male colleagues, though she passed up an invitation to discuss legislation at a bar one night. They promised not to have late night meetings at a bar again.

More women are registered as Democrats, but the GOP also has been less active in recruiting female candidates and has lagged behind the Democratic Party in providing trainings, PACs and support targeted to women, Walsh said.

Emerge America, created by Democrats to recruit like-minded women into office, has established campaign schools in 14 states. Emerge Maryland Director Diane Fink said she has seen women with all kinds of family situations go through the program and make sacrifices to serve — including one woman who interviewed for the program only to give birth later that night.

“If it means sitting there half in labor to get the training you want, that’s what you do,” Fink said.

American University, in Washington, D.C., runs a similar program, WeLead, for young women of both parties, but Lawless said promoting the campaign spirit early is no guarantee they’ll run.

“Some want to work on other campaigns, or be a lobbyist or be a campaign consultant,” she said of the participants. “Even in a politically active group of women, the desire to run is not universal.”