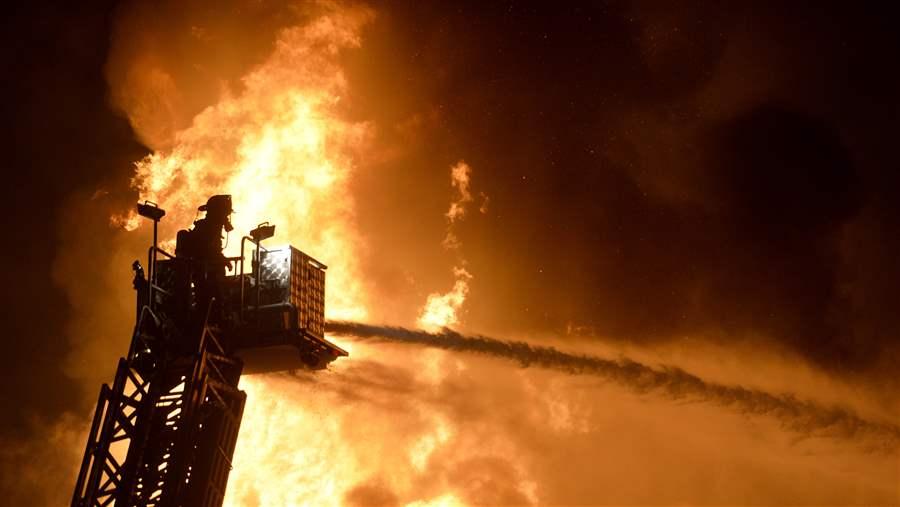 A firefighter battles a blaze in Evans, Georgia. Nearly three dozen states have passed laws that presume certain cancers are job-related for firefighters, making them eligible for benefits.

Mark Rine was just 30 when he was diagnosed with deadly, stage 4 melanoma after his wife noticed a dark spot on his back. In the three years since, doctors have cut out some of the Columbus, Ohio, firefighter’s lymph nodes, treated him with chemotherapy and discovered inoperable cancerous tumors on his spine and lung.

“I fought a lot of fires. Abandoned homes, kitchen fires, car fires, dumpster fires,” Rine said. “That’s how I got this mother of all cancers.”

Had Rine been a firefighter in one of nearly three dozen other states, it might have been easier for him to receive disability benefits: Those states have laws that presume certain cancers are related to firefighters’ jobs and their exposure to toxic smoke and fumes. That means firefighters can become eligible for benefits without having to prove that their cancer was job-related. It would be up to a firefighter’s employer, usually a city or a county, to prove the cancer was in fact caused by something else.

A state senator, Republican Tom Patton, wants Ohio to join the ranks of states that offer such special protections to firefighters like Rine.

“We expect these men and women to run into burning buildings and save people’s lives and they do a marvelous job,” said Patton, who is sponsoring what’s known as a firefighter presumption bill. “They should have the presumption that their illness was caused by the fires they were fighting.”

But Ohio cities and counties have opposed such bills in the past because they find them too costly. The Ohio Bureau of Workers’ Compensation estimated that if Patton’s bill became law, 568 more claims would be filed annually at a cost of about $75.3 million. Most of that cost would be borne by local governments.

The Ohio Municipal League and the Ohio Township Association opposed a similar, broader measure in 2010, writing that the cancer presumption provision “would considerably increase premiums and administrative costs” to cities, villages and townships across the state.

The disagreement in Ohio is typical of the clash between firefighters and local governments over cancer presumption laws.

Firefighters’ unions and others who support the laws say studies have proven the link between firefighting and cancer. They say every time firefighters show up to battle a blaze, they deal with a toxic soup of carcinogens that they breathe and absorb through their skin.

“We want to protect our firefighters during their career and after they leave,” said Doug Stern, of the Ohio Association of Professional Fire Fighters. “As we see more and more of our colleagues coming down with these cancers at a younger and younger age, it’s very emotional. It’s very personal.”

Cities and counties question whether the link between firefighting and cancer has been proven. They say expanding protections is just too costly and firefighters can apply for regular workers’ compensation, meaning they’d have to prove a connection between their job and their disability.

“The fire service is a big component of local government budgets. This potentially has a huge impact,” said Bob O’Neill, director of the International City/County Management Association, the professional organization for city and county managers. 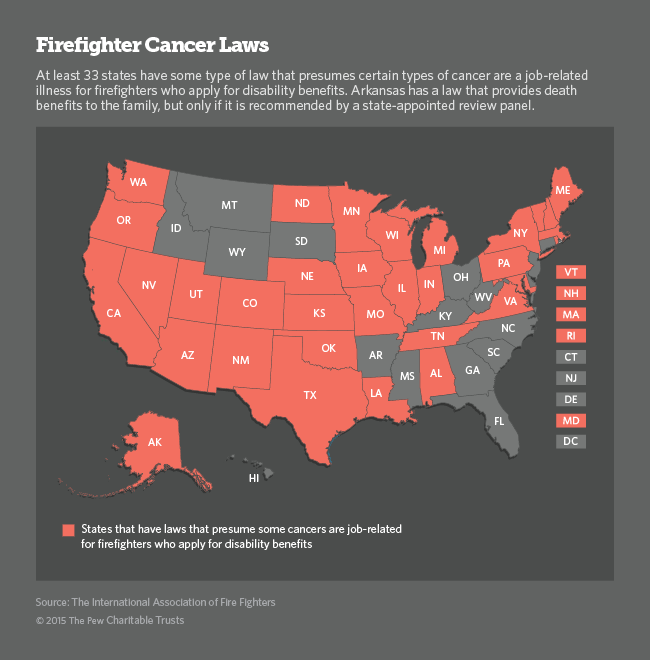 Although presumption laws for firefighters with heart or lung disease have been around in some states for more than 40 years, cancer legislation has taken hold in the last decade.

At least 33 states have a firefighter cancer presumption law, according to the International Association of Fire Fighters, a labor union with 300,000 members in the U.S. and Canada. A 34th state, Arkansas, provides death benefits to the family of a firefighter with cancer, but only if it is recommended by a state-appointed review panel.

The laws vary. Some apply only to full-time firefighters; others include volunteers. Some specify certain types of cancer; others don’t. Most require a minimum number of years on the job to qualify, ranging from three to 12. Most require that the firefighter have a pre-employment physical exam and that it show no presence of cancer.

Depending on the state, firefighters with a presumptive disability could be entitled to a number of workers’ compensation benefits, such as paid medical expenses and death benefits for family members. And their disability pension might be higher.

One of the most recent states to enact a law was Michigan, where Republican Gov. Rick Snyder signed a bill in January. Disability benefits there are to be administered by state officials and paid from a state fund, a compromise to satisfy local officials and insurers who didn’t want to pick up the costs. The fund, however, isn’t set up yet because the Legislature hasn’t identified a long-term way to pay for it.

In Florida, legislators in the House and Senate have introduced presumption bills ahead of the upcoming session that starts in January. Republican state Rep. Heather Fitzenhagen said the measures would face “an uphill battle,” but she and other sponsors were working with local governments to make it more palatable to them.

“I understand their concern about the cost, and it’s legitimate,” Fitzenhagen said. “However, there are certain costs that as a state and a community we have to bear in order to do the right thing.”

Fighting fires often means exposure to plastics, flame retardants and a variety of toxic chemicals that can cause cancer, firefighter advocates say. While protective gear and breathing apparatuses have improved over the years, firefighters still inhale soot and toxins and absorb them through their skin.

The group points to research that shows higher rates of certain cancers among firefighters, such as a 2006 University of Cincinnati study and a National Institute for Occupational Safety and Health multi-year study launched in 2010.

Firefighter advocates say they don’t know how many firefighters have developed job-related cancers, but Morrison said 62 percent of the 310 firefighters whose names were placed on his group’s memorial last year had died from occupational cancer.

In states without a presumption law, Morrison said, firefighters must prove that exposure to a particular toxin at a particular fire caused their cancer in order to get workers’ compensation benefits. “That’s extremely hard to do,” he said.

Firefighter groups say presumption laws don’t guarantee everyone who gets cancer is going to receive disability benefits. And they point out that the laws allow employers to challenge the presumption by trying to refute studies or demonstrate the cancer resulted from a firefighter’s behavior or lifestyle, not his occupation.

But for local governments, that’s “a tough hurdle,” said O’Neill, of the city and county managers group.

Local governments also view the research linking firefighting and cancer as weak or marginal. A 2009 study commissioned by the National League of Cities, for example, reviewed a number of studies and found “a lack of substantive scientific evidence” to determine whether firefighting was associated with an elevated incidence of cancer.

O’Neill said local governments have no problem with firefighters getting disability benefits when they have a genuine claim about their cancer being job-related, but presumption laws take that decision out of employers’ hands.

He also questions why firefighters are singled out when other workers, such as those in sewer and sanitation departments, deal with hazardous materials as well.

The answer, he said, is that the firefighters’ lobby is “a powerful political presence in lots of state legislatures” and has been effective in getting bills passed.

How Costly Are the Laws?

There is no national data showing the cost of presumption laws to local and state governments. A 2014 report by the National Council on Compensation Insurance concluded that such laws would cause workers’ compensation costs to rise, but said it was difficult to estimate the extent of the increase.

David Torrey, an administrative law judge who handles workers’ compensation claims in Pennsylvania, said big cities and small towns worry their costs or premiums would skyrocket under such laws. But that hasn’t happened in much of Pennsylvania, said Torrey, past president of the National Association of Workers’ Compensation Judiciary. “A lot of acute anxiety in my state is premature,” he said.

Before Pennsylvania enacted its presumption law, in July 2011, Kachline said, Philadelphia firefighters with cancer filed only about two or three cases a year. By December 2013, 62 had filed claims.

For Mark Rine, the Ohio firefighter battling melanoma, life has changed dramatically. He has three tumors in his body and still gets chemotherapy every month. He can no longer run 30 miles a week, like he used to, or work out regularly.

He now works full-time for his union, meeting with lawmakers and teaching thousands of firefighters about cancer and how to protect themselves.

Rine firmly believes his cancer was caused by the 200 fires he fought. He said he didn’t have any of the risk factors, such as blistering sunburns or a family history, nor is he fair-haired or fair-skinned.

Rine said he initially considered applying for workers’ compensation, but decided not to when he found out Ohio didn’t have a presumption law.

“I could have pursued a claim only to be turned down over and over and over,” said Rine, the father of five. “At the end of the day, when you’re dying — and I know for a fact I am dying — I asked myself, ‘Is that how I really want to spend my time? Do I want to waste it fighting for benefits I’ll never get or do I want to be with my children?’ ”