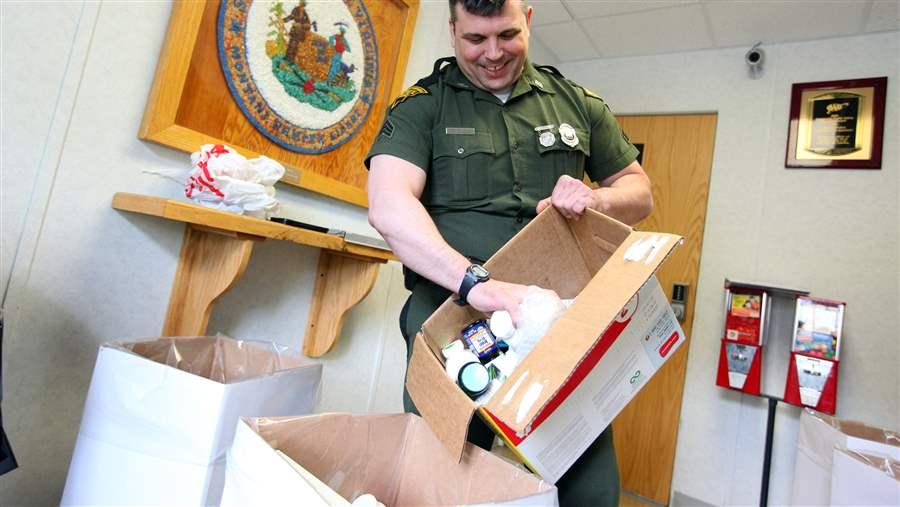 Story has been corrected to say Nebraska's take-back program uses state funds only.

Each month Monty Scheele, a pharmacist in Lincoln, Nebraska, sends a big box of unused medications to be incinerated.

He collects the drugs at his three pharmacies from customers who may be cleaning out their medicine cabinets or abandoning a prescription after an adverse reaction. His effort is part of a program using state funds to keep medications from polluting water supplies and out of the hands of people who might misuse them.

But drug disposal is expensive — the Nebraska program spends $10 per pound to ship and destroy medication — and some states and municipalities want drug companies to pick up the tab.

Proponents say these laws, which are similar to programs that require manufacturers to pay for electronics recycling, would make it easier for patients to dispose of prescriptions. But drugmakers oppose the local mandates and warn that disposal costs could be passed on to patients through higher drug prices.

Alameda County in California was the first jurisdiction to pass a law requiring manufacturers to pay for take-backs, in 2012, though the industry was quick to file suit, arguing it violated the interstate commerce clause of the U.S. Constitution. The Alameda law was upheld this year when the U.S. Supreme Court refused to hear the industry’s appeal.

Heidi Sanborn, director of the California Product Stewardship Council — a network of local governments, nongovernmental organizations and businesses that want producers to be responsible for the proper disposal of their products — helped pass the Alameda law. She points to other countries, like Canada and Mexico, which have had drug take-back programs for years.

“People [in the industry] are making this out to be super complicated and really hard, but the truth is that we can put a man on the moon, don’t tell me we can’t figure out how to collect pills,” Sanborn said.

It was the industry’s opposition to a California-wide version of the Alameda law that led advocates to focus on passing county-level measures instead, she added.

Drugmakers would rather lead their own take-back programs than comply with local or state mandates, said Priscilla VanderVeer, of the Pharmaceutical Research and Manufacturers of America, a plaintiff in the Alameda case.

Because drugmakers sell across the country, meeting the customized disposal requirements of local programs is complicated, VanderVeer said. There are also more effective ways to get rid of the medicines, she said, like at-home disposal or returning unwanted drugs using special envelopes with carbon lining.

“That’s just a financial and logistical nightmare for something that’s not necessarily going to be effective, or secure or environmentally helpful,” she said.

Take-back advocates want to get unused opioid painkillers and other highly addictive medications out of circulation so they cannot be abused or sold to recreational users.

Scheele, the Nebraska pharmacist, has begun to use secure lockboxes where customers can return their controlled medications under the new DEA rules. He said he was apprehensive about adding a lockbox, on top of his existing efforts, because it would bring excess amounts of highly desired drugs to his pharmacies. But the security of the metal boxes, which are bolted to the floor and the wall, has diminished that concern.

“I’m really glad to see this stuff get out of the community,” he said, noting that he would continue to use the lockboxes even if the funding for Nebraska’s program disappeared.

About 110 Americans die each day from a drug overdose. More than half of those deaths are attributed to opioids, including painkillers. And 70 percent of people who misuse painkillers report getting the drugs from a friend or a relative.

Marcia Mueting, with the Nebraska Pharmacists Association, said it makes sense for patients to return unused medications to pharmacies because they have relationships with their pharmacists, who can inquire about why a patient did not finish a medication and potentially identify adverse reactions.

“At the point when you decide that I no longer want this medication in my home, you should be able to take it somewhere,” she said.

More than half of Nebraska’s 500 pharmacies are doing take-backs. The program began in Lincoln and Lancaster County in 2012 and went statewide earlier this year. Since 2012, more than 14,800 pounds of drugs have been taken back.

Many participating pharmacies are small and independently owned. Some larger pharmacy chains have rules that prevent them from collecting the drugs, Mueting said.

VanderVeer argued that take-back programs are not a panacea and patients won’t be willing to make frequent trips to a pharmacy with their medications. The industry would rather focus on educating consumers about at-home disposal, she said.

“It’s sort of like recycling: the easier you make it for people, the more likely they are to comply,” VanderVeer said.

The U.S. Food and Drug Administration advises that some medications can be flushed down toilets or sinks, but that others should be removed from their original containers and mixed with undesirable substances like used coffee grounds or cat litter (to deter people from using them) and then sealed in a plastic bag before being thrown away.

Sealing and disposing of medications in the trash is supposed to be safe, but studies have found that even treated liquid waste from landfills still contains contaminants, and that drugs in water supplies are affecting fish.

It is unclear just how much groundwater contamination comes from flushed drugs versus human waste, said Cindy Kreifels, an executive at the Groundwater Foundation, a Nebraska nonprofit.

“Obviously we need to get the pharmaceuticals out of all water bodies,” she said, and take-back programs are important because the first step in cleaning up groundwater is getting people not to flush their medications.

Kreifels said there had not been any studies of contamination in Nebraska’s water since the take-backs began in 2012.