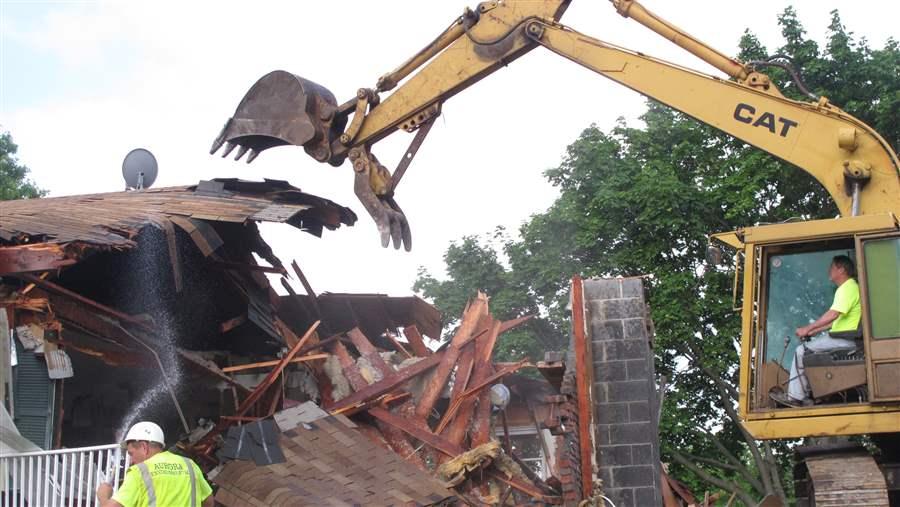 Workers demolish a storm-damaged house in Sayreville, part of a $300 million program in New Jersey to return flood-prone properties to a natural state and create buffers against flooding.

For decades, state and local governments across the country have been buying private homes near flood-prone rivers and tearing them down to save millions on flood insurance.

But as coastal communities are confronted with increasingly costly storms, they, too, are turning to buyouts, to create natural buffers along the coast and help protect nearby neighborhoods and businesses from flooding. And while some efforts have met resistance — some don’t want to leave their beachfront homes, some fear a declining property tax base — others are showing results.

After suffering heavy losses from Hurricane Sandy in 2012, New York pledged to spend $400 million in federal and state money on buyouts to create more buffers on the coasts of Long Island and Staten Island. The state has made 525 offers, worth $64 million, out of 750 to 1,000 it had anticipated in 2013.

New Jersey has a similar goal. After Sandy, the state used the same mix of federal grants and state funds to put $300 million into its existing Blue Acres program, and said it expected to clear 1,300 homes from flood-prone areas near rivers and the coastline.

The Garden State has made 700 offers and closed on more than 400 properties.

Although many coastal homeowners were willing to sell, the state found it was unable to buy enough houses — despite offering pre-storm prices for storm-damaged houses — in clusters that would allow for buffers of open space.

The post-Sandy programs in New York and New Jersey, which rely on allotments from the U.S. Department of Housing and Urban Development (HUD), are the largest buyout investments by single states.

But similar programs exist in nearly every state, and are run by other federal agencies with state and local partnerships. A program run by the Federal Emergency Management Agency has spent almost $900 million since 1998 on buyouts in 48 states. State and local governments organize the buyouts, and typically provide 25 percent of the funds, with the rest coming from the federal government. In some cases, the federal share can be higher.

In almost two decades, about $108 million went to North Carolina, according to a Stateline analysis of FEMA data. Seven other states received more than $30 million each: Georgia, Iowa, New Jersey, Ohio, Pennsylvania, Texas and West Virginia.

About 7 percent has gone to coastal buyouts, with Florida and Mississippi leading the way.

The U.S. Department of Agriculture also does buyouts, usually against inland farm flooding. Since 1996, USDA has purchased 180,000 acres for emergency flood control in 36 states. After Sandy, USDA bought out another 671 acres as part of a $99 million emergency watershed protection program in Connecticut, New Jersey and New York.

The National Flood Insurance Program, which insures 5 million properties nationwide, likely will be unable to repay the $23 billion it owes the U.S. Treasury Department because of heavy losses after Sandy and Hurricane Katrina.

At the same time, coastal communities face a worsening threat. A September study from Columbia University’s Earth Institute concluded that a combination of rising sea levels and larger storms likely will magnify East Coast flooding hundreds of times in the coming decades.

Solutions like beach replacement and seawalls have been losing their appeal as communities find even routine storms will overrun man-made obstacles and wash away millions of dollars in replacement sand, said Berginnis, of the floodplain managers group.

Severe flooding of the Mississippi River in 1993, from Minnesota to Missouri, boosted interest in buyouts and sparked legislation that increased the federal share of buyouts from the previous maximum of 50 percent. Some 12,000 properties were bought out and entire communities were shifted away from the river.

But buyouts in Louisiana found less support after Katrina, and the state ended up spending more on elevating coastal houses than on removing them to create buffers.

Today, buyout programs are often large and statewide, but they can be small and local.

In Lusby, Maryland, along the Chesapeake Bay, for instance, coastal cliffs had eroded so badly by 2013 that Susan Davis’ home was in danger of collapse and a neighbor’s patio was dangling over the bay. County officials told her that they could raise the funds to match the federal dollars needed to buy her home because a mild winter had left a surplus in the storm budget. And they warned she might not get another chance.

Davis said she and her husband wished they could have stayed and fought the cliff erosion by adding rocks at sea level. But they took the buyout and moved to a house on a creek a few miles inland.

“The situation was horrible,” Davis said. “There’s no way we could win. The house would have been worthless because there’s no way to sell it.”

Buyout programs are most cost-effective, and get most local support, when governments develop new housing in safer areas that keeps bought-out residents nearby and minimizes tax losses, according to a study by Columbia Law School.

Hurdles on the Coast

Even North Carolina — which is often battered by Atlantic storms and, at $108 million since 1998, has spent more in FEMA grants than any other state — rarely buys coastal property. The bulk of the buyout money has gone to purchase riverfront homes, said Chris Crew, the state hazard mitigation officer. Less than 5 percent has been used to purchase property along the state’s 300 miles of coast.

Many beachfront properties are rentals owned by investors, and the state’s priority is to help with owner-occupied housing. Such houses also typically cost $600,000 or more, and FEMA is unlikely to agree to buy any home above $276,000, Crew said.

“There’s not a $276,000 house on the ocean in Kill Devil Hills,” he said, referring to a popular vacation spot in the state.

Because homeowners often depend on renting out their beachfront properties, coastal houses in the state tend to be raised above typical flood levels.

Generally, Crew said, it’s been more popular — and more cost-effective for North Carolina — to buy out houses along the state’s inland network of creeks and canals that sit just a few feet above sea level.

A Boost in New York

New York’s post-Sandy buyout program got a boost when an entire neighborhood, Oakwood Beach on Staten Island, organized and negotiated buyouts last year. Residents found that even ordinary rainstorms were flooding the area, said Barbara Brancaccio, a spokeswoman for the governor.

Nearby neighborhoods joined in, and Staten Island now accounts for 338 of the 525 offers made by the state.

New York officials offered several reasons for their success, including a focus on buyouts on Staten Island’s eastern shore and Long Island’s Suffolk County, where houses are relatively affordable. The HUD program prohibits home purchases above $700,000, and vacation rentals are usually too profitable to sell.

To combat complaints that the buyouts were hurting property tax rolls, New York added a separate program that uses federal funds to buy storm-damaged homes, tear them down, and resell the land for rebuilding with an agreement that the new homes be storm-resistant. At least 275 such offers have been made.

But the idea of taking homes off the tax rolls, even to create buffers to protect other homes, remains controversial.

When Mastic Beach, a bay-front community on Long Island, heard last year that storm-damaged homes near the shore might be bought out and returned to a natural state, reaction was mixed.

“We’re nervous, because we don’t want to see our tax rolls dwindle down to nothing,” then-Mayor Bill Biondi told reporters. “There’s no reason … to buy out people’s properties and turn them into wasteland,” he said during a meeting about a plan to demolish seven homes.

But this year, the new mayor, Maura Spery, came out in support of the buyouts and of having a buffer.

Spery, who expects the water to claim her house near Narrow Bay in coming decades, said there’s a growing sense the approach buys more time for homeowners like her, and spares her neighbors some of the costs of rescues and road repairs after storms.

“How much should taxpayers have to pay for me to have access to my house if it’s underwater?” she said.