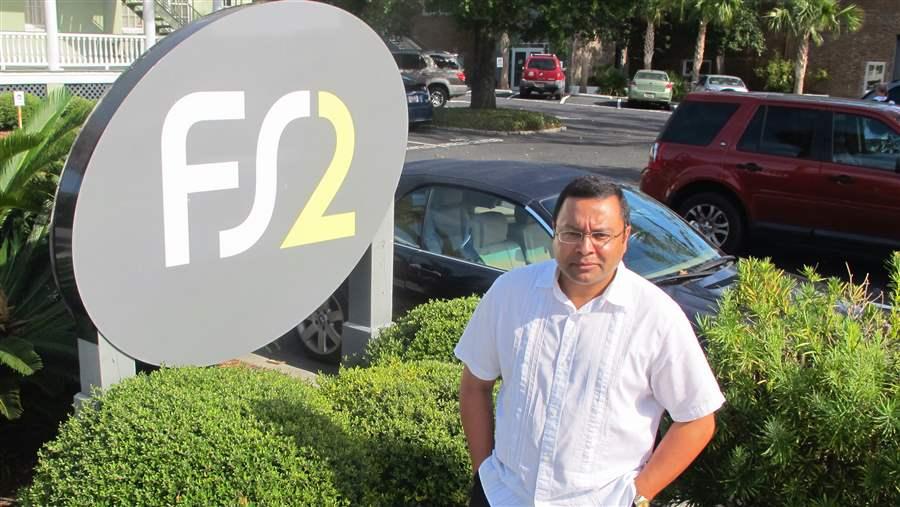 Ernest Andrade, the director of the Charleston Digital Corridor, stands outside one of the corridor's business incubator buildings. Charleston and other midsize cities are trying to reinvent themselves as high-tech hubs.

CHARLESTON, S.C. — A tiny light bulb hooked up to a computer lights up, and Antonio Rojas-Rodriguez smiles.

“I did it! I did it!” he laughs. It is the first time the 20-year-old business student at the College of Charleston has written a software program.

Light on. Light off. It seems simple, but teaching students to write code is one way this grand old lady of iron latticework and history is trying to become an entrepreneurial haven.

Cities and states across the country are trying to promote entrepreneurship, especially in technology. With dreams of becoming the next Silicon Valley — or at least something like it — they are providing money and expertise to startups and clustering tech companies in millennial-friendly neighborhoods.

These aren’t the tech giants, like San Francisco (Silicon Valley), New York City (Silicon Alley) or Boston (Route 128). These places aren’t even ready to challenge Austin, Denver or Miami — at least not yet. They are small and midsize cities where centuries-old mills, foundries and factories have collapsed. Now they are trying to build 21st century economies — from the downtown up.

In Charleston, the Interdisciplinary Center for Applied Technology (ICAT) program at the College of Charleston is nurturing — and funding — the business dreams of students such as Rojas-Rodriguez. ICAT was created this year with a $250,000 grant from South Carolina’s Commerce Department, and has raised another $250,000 from private companies and individuals. Six of the eight student projects in the inaugural class have been incorporated as businesses.

“We don’t promise kids that they’ll be millionaires, or even successful entrepreneurs,” ICAT Director Christopher Starr said. “But we give them the whole experience. They’ll be ready if they want to do it. And we want them to do it here.”

Others in Charleston are pursuing similar strategies. The Harbor Entrepreneur Center, a nonprofit business-accelerator with four locations in the metro area, provides mentors, free or cheap office space and training for startups in any industry. The nonprofit takes a $5,000 cut if the startup reaches $100,000 in investment or $250,000 in revenue in its first two years.

The Charleston Digital Corridor, another accelerator, is planning to open its third startup space, on the edge of downtown.

Such efforts have led to dramatic growth in the number of startups in Charleston, according to the Digital Corridor, which has graduated 92 startups in its spaces.

Luring millennials — those born between 1981 and 1996 — is an essential piece of the puzzle. They want to live, work and play in one place.

Chattanooga, Tennessee, has renovated and redesigned its downtown with a combination of city funds, tax incentives and private investment to include a river walk, green space, an aquarium and soon an “innovation district” that will include nearly 400 apartments as small as 300 square feet. Developers have purchased a 90,000-square-foot downtown building from the city to house a nonprofit enterprise center and accelerator. Chattanooga’s city-private partnership will spend $500 million to develop tiny apartments and redevelop open space downtown.

“Our city is going through a major transformation,” Chattanooga Mayor Andy Berke, a Democrat, said. “We’ve transformed from a dying foundry town into a growing technology center.”

Access to high-speed Internet is crucial to startups. Nine cities, including Kansas City, Atlanta and Salt Lake City, are part of Google Fiber, which provides Internet 100 times faster than what the average American has.

Chattanooga credits its superfast Internet — 1 gigabit per second — for its burgeoning startup culture. The city of 173,000 calls itself “Gig City.”

“We brought a group of wickedly smart young entrepreneurs from around the world here to say, ‘What would you do with a gig?’ ” said Ken Hays, the director of the startup accelerator Chattanooga’s Enterprise Center. “We’ve started to attract some talent to this town.”

States and the federal government are helping, too. President Barack Obama’s TechHire initiative will dole out $100 million in grants to cities, states, universities and community colleges to train workers through coding boot camps. Twenty cities, including Chattanooga, Kansas City, Portland and Salt Lake City, have committed to work with regional companies to provide the training.

Having major research universities nearby is a huge plus for cities and their efforts to encourage a startup culture. Their graduates can work in tech startups or start their own.

That’s how Research Triangle Park near Durham, North Carolina, became one of the most successful startup incubators in the country.

Starting in the 1950s, the park worked closely with Duke University, the University of North Carolina at Chapel Hill and North Carolina State University to provide low-rent space and training for students. The goal was to keep bright students in North Carolina after they graduated. Many stayed to start and run companies. Eventually the eight-county area between Durham, Raleigh and Chapel Hill became known as “The Triangle” and lured major employers, such as IBM.

Tech hubs in San Francisco, Boston and Austin all benefit from world-class universities.

“The nucleus of a startup ecosystem is talent and money,” said Bjoern Herrmann, CEO and founder of Compass, a San Francisco-based company that provides reporting and benchmarking software to startups. His annual survey of startup economies worldwide ranks Silicon Valley, New York City, Los Angeles and Boston as the world’s largest. Chicago, Seattle and Austin also rank in the top 20.

“Universities are a strong factor in why the Bay Area and Boston are thriving,” Herrmann said. “The flow from these universities can have a huge impact.”

Smaller cities are trying to copy those successful models. In Kentucky, the University of Louisville has partnered with nearby General Electric Appliance Park to launch a small factory where entrepreneurs can work with GE engineers and test new manufacturing ideas.

“It’s a mashup that’s really exciting in Louisville,” said Amy Liu, who directs the Project on State and Metropolitan Innovation. The Brookings Institution and Rockefeller Foundation project has helped 29 metropolitan areas and states in five years to foster innovation and entrepreneurship.

It helps when cities and regions focus on “what makes them unique,” Liu said.

Portland, Oregon, for example, is marketing its sustainable and green expertise. The city is known for its “crunchy” lifestyle — parodied on the TV program “Portlandia” — and its dedication to sustainable building and urban planning. But only recently did city leaders recognize that green companies, such as architecture firms specializing in green building, could work together to attract new business. Portland businesses have cooperated to land clients from Japan and Brazil.

“People are realizing that when they compete against each other, they’re stealing a piece of the pie,” Liu said. “But they’re not making the pie any larger.”