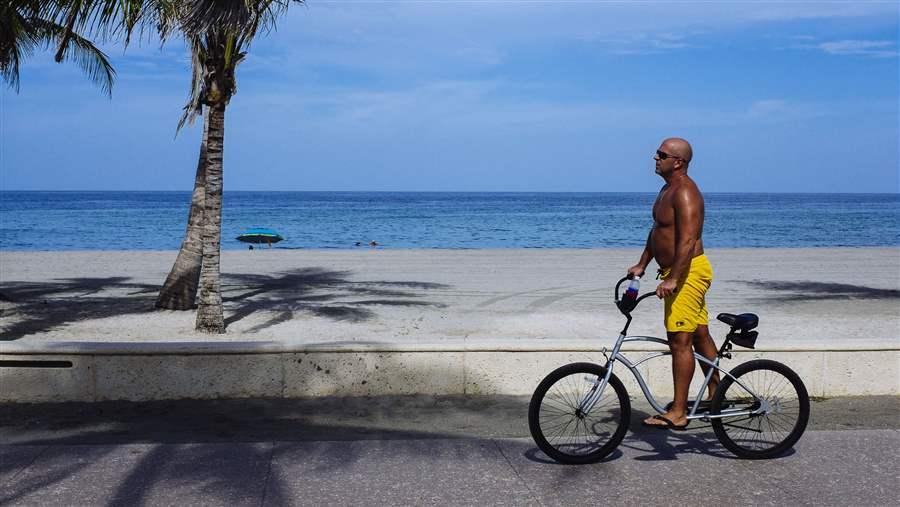 A man rides his bike along the boardwalk in Hollywood, Florida. States are trying to become more bike-friendly to attract tourists and pump up their economies.

Cities and states have long urged their residents to ride bicycles, as a healthy form of recreation and as a green alternative to driving. Now they’re recognizing pedal power’s economic potential.

Tourism officials and cycling advocates sometimes refer to tourists on bicycles as “wallets on wheels.” That’s because they stay longer in a state and spend more per day than other tourists. Oregon, for example, has found that bicycle tourism contributes $400 million a year to its economy—roughly $1.1 million a day. It was the first state to create a Bike Friendly Business Program that helps businesses market to bicycle tourists.

Other states are pursuing similar strategies. In September, Democratic Gov. John Hickenlooper declared that Colorado would spend $100 million over four years to make itself “the best state for biking in the country.” Washington, ranked the most bike-friendly state for eight consecutive years by the League of American Bicyclists, in July committed more than $500 million in state and federal funds over 16 years for biking and walking projects. Also this summer Florida approved $25 million annually to connect bicycle paths around the state into a new, statewide network.

“Biking can be such a positive force, and I think being the best biking state is going to fuel economic growth and tourism,” Hickenlooper said. “It’s going to lead us toward a cleaner environment, and it’s going to help us be the healthiest state in America.”

Touring cyclists, who tend to be older and wealthier, are especially valuable to a state’s economic health. They stay in smaller towns and support locally-owned bed-and-breakfasts, motels, cafes, craft breweries and shops. Other tourists tend to patronize national chains, economic analyses have found.

In Montana, which welcomes about half a million bicycle tourists a year, “it was an eye-opener that bicycle tourists spent more” than other tourists, said Norma Polovitz Nickerson, director of the Institute for Tourism and Recreation Research at the University of Montana.

“This might not be the largest tourism niche, but everybody’s interested in boosting the local economy. Bicycle touring has very little impact on the landscape, and it comes with a nice economic bonus,” she said.

Nickerson conducted a study in late 2013 that found touring cyclists in Montana were on average 52 years old, spent on average $75 per day and stayed eight nights or more. Touring is defined as spending at least one night away from home, state residents included. The average nonresident vacationer during summer months spent $58 per day and stayed six nights in the state, the study found.

After the study’s release, Montana created more bike-in camping spots at state parks, and the Department of Transportation is working toward changing its policy on the placement of highway rumble strips to be more bike-friendly, Nickerson said.

Florida Senate President Andy Gardiner, an avid cyclist, has tried for years to raise his state’s profile as a cycling state. A robust system of bicycling trails would not only make cycling safer and more fun but would help recruit younger people to move to Florida, he said.

This year Gardiner, a Republican, pushed through a change in the way vehicle registration fees are spent to redirect $25 million every year to a statewide network of bike paths. “It’s a lot of money for a long time,” Gardiner said. “This will put us onstage with other states.”

Funding for bicycling and walking projects comes from federal, state and local sources. It’s difficult to compare spending by state because some report stand-alone bicycle and pedestrian ventures while others report them as part of larger highway plans, the Alliance for Biking and Walking said.

States spend, on average, less than 2 percent of state budgets and about 2 percent of federal funds on bicycling and walking projects, the group said.

But the numbers are increasing. “Some states now recognize that bicycling is an attribute that cannot only make a state healthier and fitter but can also draw high-quality employers, economic growth and tourism,” said Douglas Shinkle, a transportation policy expert for the National Conference of State Legislatures (NCSL).

In Washington state, for example, the 2005 transportation package included $72 million for biking and walking projects over 16 years, whereas this year’s package, over the same time frame, funneled $500 million to such projects.

Blake Trask, state policy director of Washington Bikes, said the most recent package garnered support from both sides of the aisle. Local chambers of commerce, tourism offices and businesses all want to promote their local economies through cycling, Trask said.

Democratic Mayor Jeri Muoio of West Palm Beach wants to make her Florida city of 102,000 residents one of the most bike-friendly in the nation. She was among the officials from 13 U.S. cities who visited Copenhagen in September on a Knight Foundation-funded trip to learn how the European city makes bicycling easy and safe.

“People take bicycles in Copenhagen not because it’s a green thing to do or it is good exercise but because it’s the easiest way to get from Point A to Point B,” Muoio said. “We’re still tied to our cars.”

Indeed, many critics of bike-friendly measures argue that scarce transportation dollars should pay for relieving congested streets and highways and shoring up unsafe bridges for motorists who pay gas and vehicle taxes. Bicycle advocates counter that they own cars as well as bikes and that they do pay taxes. Political views also play a role.

“We don’t want federal dollars paying for local projects,” said Mike Krause, vice president of operations for the Denver-based Independence Institute, a proponent of free markets and limited government. “It’s not right to make taxpayers in California and Maryland pay for bike lanes in Colorado.”

Massachusetts has set a goal of tripling the number of biking, walking and mass transit trips between 2010 and 2030. But cyclists in the state often complain about dangerous streets, so Massachusetts is studying bike paths that are separated physically from both motor vehicles and pedestrians. Such protected lanes have been in use in Europe for decades but are rare here.

The state’s transportation agency this month issued the first statewide guide to designing and building such lanes. “Many people—including me—are reluctant to bicycle adjacent to busy roadways alongside fast-moving traffic. That’s where separated bicycle facilities come in,” Stephanie Pollack, Massachusetts secretary of transportation, said in an introduction to the guide.

But Randal O’Toole of the libertarian Cato Institute questioned the wisdom of that approach. O’Toole, a devoted cyclist who said he has never commuted to work by car, said separate bike trails are expensive and many cyclists don’t end up using them. O’Toole also is opposed to narrowing city streets for separate bike lanes because that could increase traffic congestion.

Rather than building “glitzy projects,” he said localities should choose streets parallel to major thoroughfares and minimize the number of signals and stop signs cyclists encounter there, remove rumble strips and widen shoulders. If you want to encourage tourism and spur economic growth, he said, sponsor bike races and other events to bring in cyclists and temporarily close off city streets.

“What needs to be done is figure out ways to make streets safer for bikes without being hostile to cars,” O’Toole said.

Safe-passing laws are another alternative to separate bike trails and lanes. Twenty-four states and the District of Columbia have laws requiring motorists to allow 3 feet when passing bicycles, as of October 2015, according to NCSL. Pennsylvania went a foot farther to a 4-foot passing law. Nine other states generally require motorists to pass at a safe distance.

Texas is among 16 states that have no safe-passing law. State Sen. Rodney Ellis, a Democrat, has tried unsuccessfully over the years to persuade Texas legislators to pass safe-passing and other bills to promote cycling.

Ellis loves to bike, and he knows one way to change minds: Get elected officials “passionate about biking on a personal level.” Then, he said, they could make the next step and be passionate about policy.