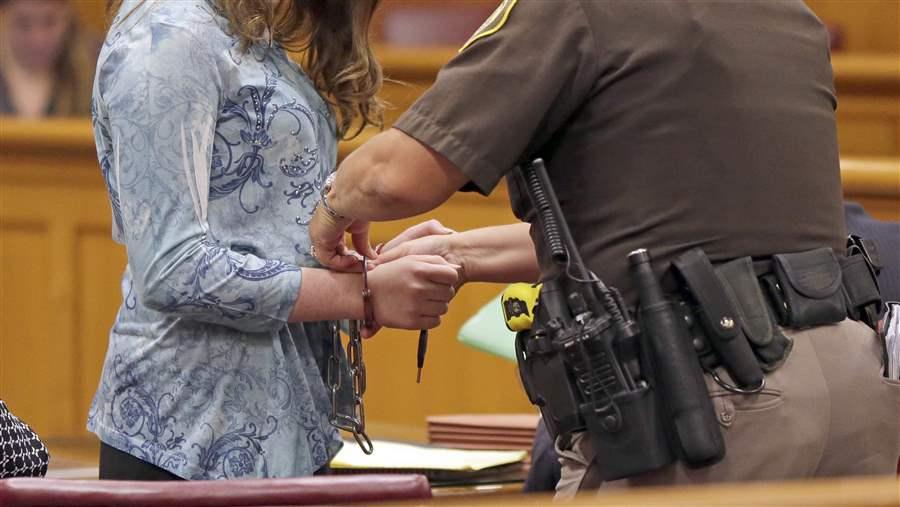 Arrest rates for girls haven’t fallen as sharply as those for boys. States are working to develop juvenile justice programs targeted to girls.

When she was 11, KiAmber was arrested for defacing school property—a misdemeanor the Tallahassee, Florida, girl insists she did not commit. That experience scared her.

By the time she turned 12, she was pregnant. School wasn’t safe—fights broke out all the time. So KiAmber asked to enroll in a program for at-risk girls, funded by the state, where she receives intensive counseling and tutoring. Now, the ninth-grader said, she’s matured and is looking forward to creating a stable life for herself and her 3-year-old daughter. Without early intervention, “I don’t know where I’d be,” said KiAmber, who at 15 is still a juvenile and asked that her last name not be used.

Male juvenile offenders still greatly outnumber females. But while the arrest rate for juveniles has declined over the past two decades, it has not fallen as sharply for girls as it has for boys. And minority girls are twice as likely as white girls to be incarcerated.

Advocates say there aren’t enough juvenile justice programs targeted to girls, whose needs are often more complex than boys’. Many girls in the system have been physically or sexually abused or have mental health issues. Forty percent are gay, bisexual or transgender, compared to 14 percent of boys. Many are poor. Many have been funneled through the child-welfare system.

States and localities are on the front line: They control the schools, police, courts and juvenile detention centers. Federal law requires states to assess how their juvenile justice programs serve girls and come up with concrete plans to improve them.

In response, some states are taking aggressive measures to address the juvenile justice gender gap. Among the most notable are Florida and Connecticut, which over the last decade have mandated gender-specific programming. Florida also closed a girls’ maximum security facility.

This month, the Massachusetts Legislature formed a subcommittee to examine children who are in both the juvenile justice and foster care systems, with an eye toward racial and ethnic disparities.

“My concern as a legislator is that there’s something systemic here that we need to look at and change the system to make it a little more equitable,” said Massachusetts state Rep. Carolyn Dykema, a Democrat who sits on the committee. It’s shocking, she said, to see the criminal charges some girls face in court. “They don’t have a strong advocate. This is not how our system should work.”

Delinquent girls end up trapped in a cycle of dependency, and are more likely to have children who are then funneled through the child-welfare system, Jones said. “The economics of it grows exponentially. By investing in a girl early on, you’re going to save millions of dollars for taxpayers.”

Girls are often penalized for disruptive or violent behavior that springs from sexual abuse or physical violence at home.

Assault charges, for instance, often are connected to a chaotic homelife. “If a girl has a history of violence, we know that’s a symptom of trauma,” Jones said. In 2012, girls accounted for 26 percent of juveniles arrested for aggravated assault.

Girls experience sexual abuse at more than four times the rate of boys, according to a September report by the National Women’s Law Center.

In 2013, 37 percent of girls were held for technical violations and “status offenses,” such as underage drinking or running away, which are crimes only because they are minors and are usually related to trauma at home and in the community.

Minority girls are twice as likely as white girls to be incarcerated. At school, African-American girls are more likely than white girls to be arrested, suspended for disruptive behavior, and viewed as having an attitude and wearing revealing clothes. Such disparities, legal experts say, create a school-to-prison pipeline for minority girls.

“If you’re a black or brown girl who’s been bought and sold, you’re more likely to be arrested” for prostitution, Saada Saar said. These girls are seen more as Jezebels than as rape victims, she said. “We’re not talking about adults; we’re talking about children.”

Some states have begun to experiment with ways to keep from penalizing schoolgirls for what some experts say is often either normal, rambunctious teenage behavior or that of traumatized girls acting out.

Illinois and Maryland have passed laws that require schools to respond to disruptive behavior by teaching social skills, rather than relying on expulsions and arrests.

Girls can end up neglected in the system: Most programs address the needs of boys, because male juvenile offenders still greatly outnumber females, said Melissa Sickmund, director of the National Center for Juvenile Justice.

For example, over the past two decades, juvenile reform has focused on eliminating detention in favor of placing offenders in after-school neighborhood centers, where they receive tutoring and counseling, Sickmund said. The idea is to keep them in their community, working with counselors, probation officers and teachers from the community. But because there are so few girls in the system, Sickmund said, it’s often hard to evaluate the effectiveness of programs for them.

A few years back, for instance, Pennsylvania had a program in place for juvenile girls with post-traumatic stress disorder. But the program was dissolved because not enough girls were participating to track whether or not the program worked, Sickmund said. Other programs around the country have met with similar ends, she said.

Fifteen years ago, Massachusetts officials started looking at juvenile justice rates, breaking them down by gender and race, said Barbara Morton, regional director for the Massachusetts Department of Youth Services. They found that many of the young girls who committed lesser crimes had suffered from trauma and chaotic family situations.

So the state focused on treatment, rather than punishment, requiring juvenile justice employees to undergo gender-specific training and creating a mental health assessment tool to assess girls’ needs. Now, Morton said, fewer girls are cycling through the system and fewer girls are reporting suicidal thoughts.

The state also found that girls’ needs vary by race and ethnicity. For example, most Haitian-American girls come from big, extended families who need to be included in their treatment. And Southeast Asian families tend to be wary of using Western medicine, Morton said.

In 2004, the Florida Legislature passed a law requiring gender-specific programs. A year later, the state closed its Florida Institute for Girls. Other legislation followed, including a ban on shackling pregnant women and protections for sexually exploited children.

The state also partnered with PACE, a 30-year-old school-based diversion program for girls who’ve been arrested or are at risk of getting in trouble.

The idea was to create a research-based program that was different from boys’ facilities, PACE’s Jones said. Today, it is funded by the state and local school districts as well as some private donors and serves over 2,000 middle and high school aged girls each year through 19 year-round, satellite schools throughout Florida.

For KiAmber, PACE has been a lifesaver. She entered the program behind in her schoolwork, but at the center was able to work at her own speed. Now, she said, she is progressing in her studies and looking forward to transitioning into a mainstream high school in the next month or so.

“I see myself graduating,” KiAmber said, “with a stable job, a stable apartment and a stable life.”