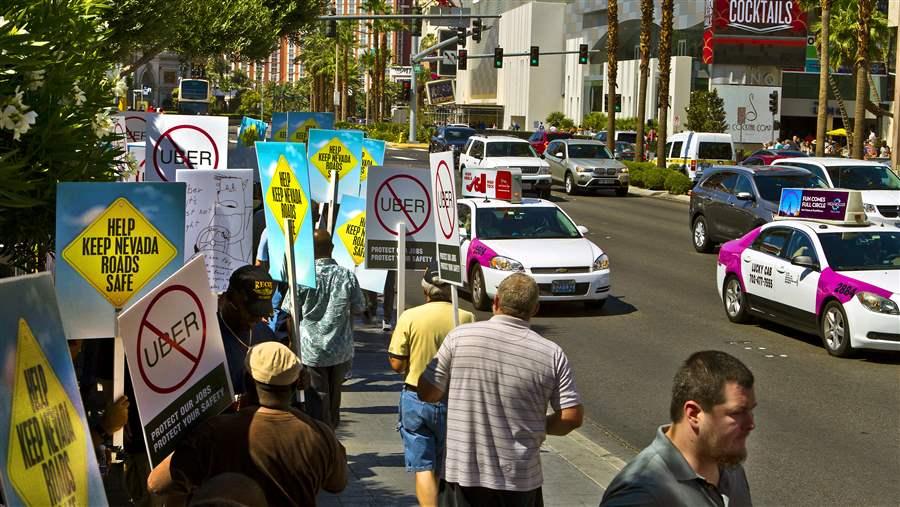 Taxi drivers gather on the Las Vegas Strip to protest Uber, the competing ride-hailing service. Nevada, like more than half the states, is now regulating the service. It’s also taxing it.

For two days this month, taxi drivers didn’t pick up any weary travelers leaving Mineta San Jose Airport. Instead they drove past, honking, and hoping their strike would persuade city leaders to make ride-hailing companies such as Uber and Lyft follow the same rules as taxi companies at the airport.

“Either the city should deregulate us completely, like them … or regulate them at least closer to us, and let there be fair business competition,” said Kirpal Bajwa, a taxi driver and union leader.

Ride-hailing companies, which connect paying passengers and drivers through a mobile app, deliver rides like a taxi service. But they’re not taxi companies, and states and cities are beginning to regulate them differently.

California created permitting and public safety rules for ride-hailing companies in 2013. Over half the states now have regulations in place, according to the National Conference of State Legislatures (NCSL).

But as San Jose’s experience shows, the debate over how to govern Uber and others is far from over.

The Ride So Far

Ride-hailing companies have become very popular very quickly. Uber, the largest of them, was founded in 2009 and now operates in over 300 cities all over the world. Through its app, riders can digitally hail a number of services, including professionally driven limousines, taxis or what Uber calls UberX—a personal vehicle, driven by someone who typically works for Uber in her spare time.

The California Public Utilities Commission regulates Uber, Lyft and others as transportation network companies. The state requires TNCs to get a permit and commercial insurance coverage for drivers while they’re working for them and to run criminal background checks on drivers.

That’s the basic structure other states have adopted, according to Uber, although details vary by state. Since the California regulation, Uber and Lyft have started insuring all drivers nationwide at different levels for when they are looking for passengers, on their way to pick them up or transporting them. California passed additional legislation last year to make sure drivers have sufficient insurance coverage.

But some lawmakers, such as San Jose Mayor Sam Liccardo, a Democrat, say the background checks that California requires don’t go far enough: “I am very concerned about safety in this industry.”

San Jose requires taxi drivers to pass a fingerprint-based background check before they can accept passengers. But the state only requires TNCs to run drivers’ names and Social Security numbers through criminal databases.

Uber spokeswoman Laura Zapata argues that Uber’s current procedures are sufficient because “no background check is 100 percent accurate.” Uber and Lyft also track every ride through GPS and encourage drivers and riders to rate each other’s performance, features that help the company monitor drivers, she said.

California’s regulations prevent cities from making their own TNC laws. But cities do have jurisdiction over airports, so this summer San Jose decided to try requiring such drivers to pass fingerprint-based background checks to pick up airport passengers.

No drivers signed up for the pilot program. And when the city started to reconsider, taxi drivers went on strike. The strike was about fairness, Bajwa said. “We do so much,” he explained, and listed city procedures taxi drivers must follow but ride-hailing drivers don’t, from renewing their driver’s permit every two years to passing additional driver safety tests.

San Jose ultimately decided not to require ride-hailing company drivers to pass a fingerprint-based background check. Instead, drivers who get permits to pick passengers up at the airport will be subject to random, additional checks by airport officials, including background checks and fingerprint tests to confirm their identities.

Liccardo said that’s better than nothing, but city leaders also plan to lobby the state to institute tougher screenings.

The debate over ride-hailing also pushed the city to reconsider its taxi regulations. San Jose’s City Council voted last week to scale back some requirements for taxi drivers, including allowing drivers to work on a temporary basis while they await the results of their fingerprint-based background check.

State lawmakers haven’t focused yet on taxation, but ride-hailing companies could be a source of tax revenue down the line, said Douglas Shinkle, a transportation policy expert for NCSL. “Transportation funding has been a persistent thorn in the side of states,” he said, and the services could emerge as a tempting target for governments.

Taxes and fees paid by taxi companies, drivers and riders—like the cost of a business license—typically aren’t big moneymakers for cities. But they can matter to airports. In San Jose, for example, taxi and door-to-door shuttle fees, which are paid by riders and passed on to the airport, make up about 1 percent of the airport’s operating revenue.

Cities like San Jose are extending airport pickup fees to TNCs. A few cities and at least one state have gone farther and started taxing rides.

When Nevada legalized ride-hailing this summer, a 3-percent excise tax per ride was part of the deal. The tax could raise up to $100 million over two years, according to The Associated Press, which would go to fund the University of Nevada School of Medicine in Las Vegas and other state projects.

Chicago Mayor Rahm Emanuel, a Democrat, bumped the city’s 30-cent surcharge on ride-hailing company rides to 52 cents in the city’s latest budget. The revenue will partly go to the city, and partly to lower the cost of taxi driver licenses, according to the Chicago Tribune.

New York City is a special case. The city—famous for its yellow cabs—regulates TNCs like black car services. That means that all Uber and Lyft passengers pay an 8.8-percent combined state and local sales tax on their rides. Taxi cabs pay a 50-cent surcharge per ride, which funds city transit, as well as paying other assorted local taxes and fees.

The sales tax is set to raise $159 million for the city and state in 2015, while the taxicab surcharge will likely raise $87 million, according to a study from the Citizens Budget Commission, a nonprofit that studies government finances. That’s partly because the companies have grown so much.

The biggest challenge cities and states have to face as they create new regulations, however, is that Uber and its competitors keep creating new services.

Last year, Uber and Lyft debuted a new feature that allows multiple riders headed for multiple destinations to hop in the same vehicle—like a car pool. This month, Uber announced a feature Lyft pioneered, which allows a driver on an incidental trip across town to turn on his or her app and pick up riders heading in the same direction.

“We’re moving closer to what purists would call ride-sharing,” said Susan Shaheen, a professor at the University of California, Berkeley who studies ride-hailing companies.

TNC laws are being written with Uber’s business model in mind, said Matthew Mitchell, of George Mason University’s libertarian-leaning Mercatus Center. “They’re setting the rules to favor themselves,” he said of the services.

Uber and Lyft have lobbied hard to make sure state and local rules suit their businesses. Earlier this year, for example, Kansas legislators passed a law that required additional insurance coverage and stricter background checks for drivers. Uber stopped operating in the state. Lawmakers quickly passed a less onerous law.

But just as strict rules that once kept competitors out of the taxi industry have become a straitjacket for taxi companies, so may today’s ride-hailing laws create a problem for future business models. In 15 years, Mitchell said, lawmakers may be going through a similar battle to legalize Google’s self-driving cars.