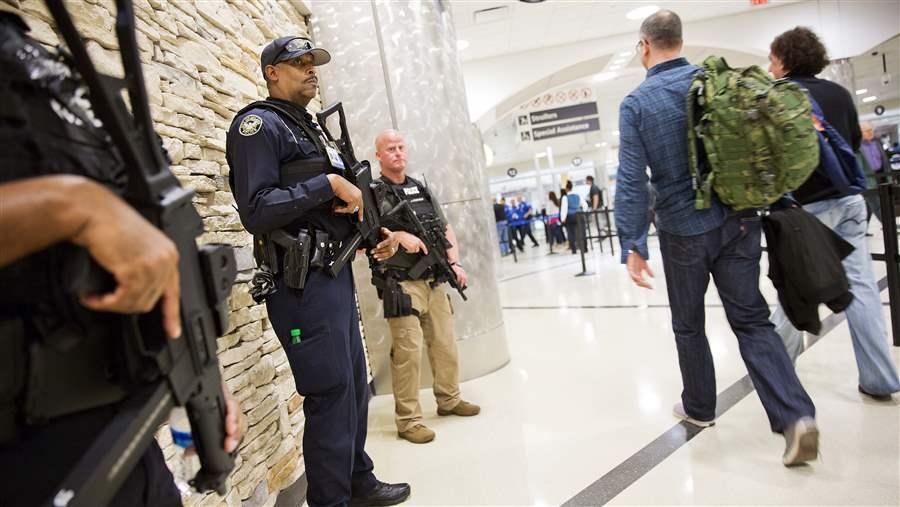 Heavily armed officers stand by a security checkpoint at Hartsfield-Jackson Atlanta International Airport after terrorist attacks in Paris. Experts say that smaller U.S. cities may lack the resources needed to prevent or react to an attack.

For Tuscaloosa, Alabama, there are lessons to be learned from the terror that gripped Paris just over a week ago.

Maddox said he considered what could happen in his 95,000-person city. But he and some terrorism and security specialists say many chief executives and police departments in midsize U.S. cities may not realize that terrorism could put their people and infrastructure at just as much risk as high-profile targets like New York City and Washington, D.C.

“The larger cities understand and grasp this,” Maddox said. “I’m not sure that at the midlevel cities the awareness is that high.”

But terrorism can and does happen in those places. This year, two men suspected of communicating with overseas terrorists were killed when they attempted to attack a free-speech event in Texas, a gunman killed four people at a military recruiting center in Tennessee, though it was unclear if he had worked with known terrorist organizations, and security was heightened across the country during Fourth of July weekend.

In the days following the Paris attacks New York City deployed the first 100 officers in the city’s new Critical Response Command. The 500-officer program will be dedicated to counterterrorism in the city, which spent $170 million this year to bring 1,300 new police officers to its 34,500-officer force.

Conversely, in Wichita, Kansas, where an airport worker was arrested after he tried to execute a suicide attack at the local airport in 2013, the 437-officer police force was struggling to stay fully staffed this summer.

While it’s difficult to tell just how prepared every state and municipality is for a potential terrorist attack, security specialists say the ability to prevent and react well depends on a communication system and local counterterrorism efforts that are still underdeveloped, even 14 years after 9/11.

Chet Lunner, a security consultant and former senior official at the U.S. Department of Homeland Security (DHS), said the FBI has counterterrorism investigations in every state, but most places probably lack the resources to prevent or respond to an attack.

“You might think that all 50 states are responding to that kind of warning, but I’m not sure that they are at the appropriate level,” Lunner said.

The Paris attacks on “soft” targets like the restaurant and the concert hall—places with minimal security—should signal to local governments in the U.S. that they, too, could be at risk.

Lunner and Michael Balboni, a security consultant and former New York state senator who wrote homeland security laws for his state, say even if smaller cities and towns aren’t at high risk for violence and are short on the financial resources that big cities have, they should still plan and practice for terrorist attacks.

“State and local personnel are literally the tip of the spear,” Lunner said. “They owe it to themselves as well as the communities they serve” to be as prepared as possible.

Despite repeated efforts and hundreds of millions of dollars spent on collecting and sharing information nationwide about potential terrorist threats, questions remain about how much filters down to local officials, especially in smaller municipalities.

In 2003, DHS and the U.S. Department of Justice began creating fusion centers to encourage and ease the sharing of information between federal law-enforcement and counterterrorism officials in states and major urban areas. But a 2012 U.S. Senate subcommittee report found the centers yielded little counterterrorism intelligence.

In 2011, the White House released the first national strategy and plan to empower local governments to prevent domestic violent extremism and homegrown terrorism. The plan advocates enhancing federal engagement with local communities that may be breeding grounds or targets for violence, though it has been criticized for disproportionately focusing on and alienating Muslims.

Until there is centralized information-sharing between the national and local governments, it will be difficult to get localities invested in sustained antiterrorism work, Balboni said.

Balboni, who also served as a New York state homeland security adviser, said the fusion centers need to morph into what he calls “command and control centers” that gather intelligence and work in places where a potential threat or terrorist activity surfaces.

People who don’t live in big cities typically viewed as likely terrorist targets may not think about terrorism affecting their communities or about devoting the resources to countering the possibility they could be hit. But they ought to.

Less-populated locales are where terrorists may settle in to plan or practice attacks, Lunner said. It is up to local police to get to know people and seek out information about potential threats.

“In this country, if you dial 911, the CIA does not show up at the end of your driveway,” Lunner said.

In Minot, a North Dakota city of less than 50,000, dealing with terrorist threats became a reality in the wake of the Paris attacks as the names of six people stationed at the Minot Air Force Base appeared on an Islamic State hit list.

The biggest challenge in responding to such a threat, Police Chief Jason Olson said, is the limited amount of resources his department has to focus on gathering intelligence and analyzing data.

Minot is a good example of a place that many would not typically consider to be at risk for terrorism. And all Olson and local officials can do is push for relevant and timely information from the federal government. But, Lunner said, they are probably not as informed as their counterparts in places like New York City.

Although states were quick to spend billions of federal dollars funneled to them after 9/11, they couldn’t sustain salaries needed to run long-term local surveillance programs with that one-time infusion of money. Since then, local spending on antiterrorism has been reduced, said Doug Farquhar, a program director with the National Conference of State Legislatures.

“The problem is that they knew this was one-time dollars,” Farquhar said. “You can buy a firetruck or build a building, but you can’t hire employees.”

Localities have also been unlikely to pay more attention to antiterrorism because of the infrequency of attacks, he said.

Maddox said Tuscaloosa is unique in its willingness to dedicate money and resources to prepare for terrorism and disaster. He credits much of that willingness to training that he and his staff received from the Federal Emergency Management Agency, in 2009.

“It’s getting your team to believe that we need to prepare for a moment that may or may not ever come,” he said.

For many states and municipalities, counterterrorism has become just a part of general disaster preparation, Farquhar said.

Maddox, who has been credited with an exemplary response to a 2011 tornado that destroyed 12 percent of the city, said the same elements of responding to a natural disaster or a major violent crime—providing emergency medical care, shelter and food, and good law-enforcement—extend to counterterrorism.

“Whether we have a natural disaster or an active shooter situation, my protocols are going to be nearly identical in how we approach that situation,” he said.

And in Minot, which has suffered a number of disasters in recent years—including a train derailment and subsequent ammonia spill, a chemical warehouse fire and historic flooding—Olson said responding to terrorism has become just a part of the disaster preparedness plan.