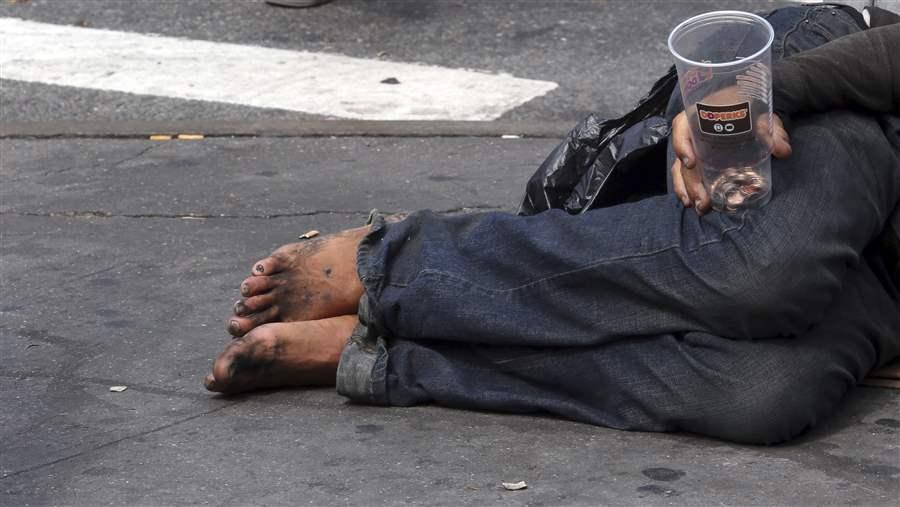 A homeless man panhandling in New York City. The Obama administration recently announced that Medicaid funds could be used to help the homeless find housing and remain there.

Communities with big homeless populations are increasingly turning to a strategy known as housing first. The idea: helping chronically homeless people to find a permanent home—and stay in it—is the best way to help them lead stable, healthy lives.

The approach has been used in cities like Chicago and Cleveland, as well as in several states, such as Massachusetts, Minnesota and Washington, as local nonprofits have worked to provide both housing and health care to homeless people.

And it got an important endorsement in June, when the Centers for Medicare & Medicaid Services (CMS) told state Medicaid offices around the country that Medicaid dollars, usually reserved for clinical services and medications, could be used to help chronically homeless people and others with long-term disabilities to find and maintain permanent housing.

That means a fresh source of funds for everything from helping homeless people apply for housing and understand the terms of their lease to teaching them how to get along with neighbors and make healthy food choices.

The CMS policy statement comes as many states continue to struggle with large homeless populations. The U.S. Department of Housing and Urban Development (HUD) reported Thursday that while the overall number of homeless in the U.S. dropped by 2 percent, or by 11,742 people, this year over last, it increased in 17 states. New York had the largest increase, of 7,660 people, followed by California with 1,786 more homeless.

Advocates for the homeless have welcomed the CMS move, which will allow states and localities to spend more on other services for the homeless, including the construction of more housing. Thus far, no opposition has surfaced to using Medicaid money this way.

“The more we can offset supportive services through Medicaid, the more we can reallocate [federal housing] dollars and private dollars to rent more units,” said Ed Stellon, interim director of Heartland Health Outreach, a nonprofit focused on helping the poor access health care in the Midwest. “If I can pay for even one of the case managers through Medicaid, I might be able to pay rent for a dozen units and expand the number of people with housing with existing resources.”

Earlier approaches to homelessness focused on helping the homeless take transitional steps toward permanent housing as they acquired the skills needed to live independently. That philosophy has gradually given way to the idea that it is more effective to move the homeless to permanent housing as soon as possible, while still giving them the support services they need to survive on their own.

“Frankly, we used to underestimate the stabilizing impact that housing has,” said Joe Finn, president of the nonprofit Massachusetts Housing and Shelter Alliance. “If we can keep people housed, some of these other things tend to work out better.”

Homelessness advocates say the CMS announcement came in response to requests from California and New York, which had urged the agency to allow that Medicaid money be used to build housing or pay rent for the homeless. CMS refused to go that far. Even without federal support, New York has taken action, using state Medicaid funds on housing projects and other efforts.

Nonetheless, state Medicaid officials are pleased with CMS’ commitment to pay for supportive housing services. “I think it was a signal that the federal government gets it—that they see the relationship between housing and health,” said Elizabeth Misa, deputy director of New York Medicaid. “This is going to be a very helpful tool for New York and the rest of the country.”

California and Washington already have signaled an interest in using Medicaid funds for supportive housing.

The chronically homeless, many of whom suffer from mental illness or addiction, are a particular problem for states and localities. After significant drops the previous two years, the number of them who remain on the streets and not in shelters leveled off somewhat in the past year, according to HUD. And they often need a variety of services to get off the street and remain in a home.

Housing-first programs encompass many such services: help in identifying appropriate housing, assistance with the application process and understanding the terms of a lease, and aid in moving into and furnishing a home. Some programs provide intervention services if a person’s tenancy becomes jeopardized (which often occurs with the mentally ill), coaching in maintaining relationships with neighbors and landlords and in shopping for healthy food, and crisis intervention services.

The federal government has paid for such supportive housing services in the past, typically through grants from HUD, which in 2014 sent about $1.8 billion in grant money to states for homeless services.

Medicaid, a health plan financed jointly by the federal government and the states to provide medical care for 72 million poor or disabled Americans, typically pays for clinical care and medication. But the CMS bulletin indicates that, at least when it comes to the chronically homeless, the Obama administration interprets health care more broadly.

“CMS is making the clear statement that the way to improve the health of homeless people is to ensure that people have stable housing,” said Richard Cho, deputy director of the U.S. Interagency Council on Homelessness, an independent federal agency that coordinates the government’s approach to homelessness.

Technically, the CMS bulletin only clarified existing policy, but just a few states, including Louisiana, Massachusetts and Texas, had been using Medicaid money to pay for supportive housing services. More often, Cho said, state Medicaid programs were paying for supportive housing services for the severely mentally ill and the elderly. The bulletin made it clear that the chronically homeless qualify for the same services.

To begin using the funds that way, states will have to hop through several bureaucratic hoops. Most will have to apply for a CMS waiver, but the bulletin signals that they will get a friendly reception from the Obama administration. CMS is also offering to advise states on how to devise effective supportive housing programs, which it says should involve coordination among numerous state and local health, mental health, social service and housing agencies.

While homelessness advocates have applauded the Obama administration’s move, some states had hoped the administration would go farther. In recent years, New York and California urged CMS to allow Medicaid to pay for construction of housing for the homeless and for rent subsidies, in addition to the support services. While the administration was unwilling to go that far, those conversations prompted CMS to issue last summer’s bulletin, Cho said.

CMS’s resistance to using Medicaid money for housing construction didn’t stop Democratic Gov. Andrew Cuomo. This year, New York spent $34 million of state-only Medicaid dollars on capital housing projects for the homeless and other targeted groups. “We’re convinced this is going to prove to be a cost-effective use of our Medicaid dollars,” Misa said.

In many ways, homelessness itself contributes to poor health. With little access to healthy food, frequent exposure to severe weather and vulnerability to violence, homeless people are generally in far worse health than the rest of the population. They have much higher rates of mental illness, addiction, diabetes, high blood pressure, asthma, HIV and many other conditions; the homeless often ignore easily treatable symptoms until they become debilitating and far more expensive to treat. What health care they receive is usually by way of the emergency room.

Historically, few of the homeless have had health insurance. But the 2010 Affordable Care Act changed that, targeting nearly $1 billion over five years to specialized clinics for the homeless, out of $11 billion earmarked for community health. And, while Medicaid traditionally was available to the poor, to pregnant women, to children and to the disabled, the health law extended Medicaid benefits to all Americans earning an annual income under 133 percent of the poverty line, or $15,654 for an individual. So far, 30 states, plus the District of Columbia, have chosen to expand eligibility under the new law.

Homeless agencies say thousands of homeless have been enrolling in Medicaid, and early studies have demonstrated significant increases in the number of homeless with health insurance since states began to expand Medicaid in accordance with the health law, in 2014.

Still, advocates for the homeless say health insurance is not enough to ensure that homeless people access the health care they need. For that, advocates insist, they need permanent housing and help staying there.

As Finn, of the Massachusetts Housing and Shelter Alliance, put it, “What we found that helps the most is just having someone dropping by regularly to ask, ‘Is there anything you need?’ ”

Even without the Medicaid funding, cities and states have successfully moved many of their homeless into housing and surrounded them with support services, including medical care. Although HUD has provided funding for those services, much financial support has also come from private sources.

The programs typically select as participants frequent users of emergency rooms and those who’ve been hospitalized often, in hopes that providing supportive housing will help them stay out of the hospital and reduce overall health care costs. Misa said New York Medicaid is currently collecting data to determine if that is the case.

Several programs have been established around the country: