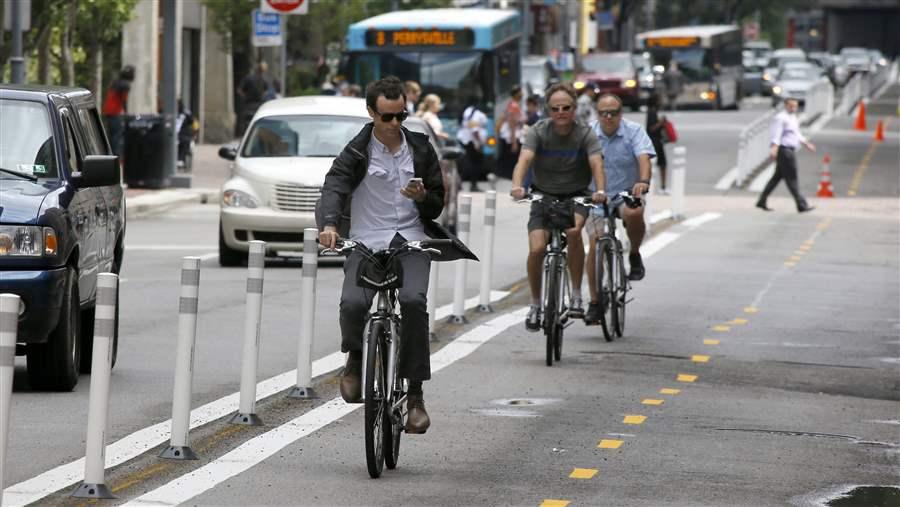 A cyclist looks at an electronic device as he peddles in downtown Pittsburgh. Hoping to improve safety, some cities and states are cracking down on distracted biking.

The efforts to reduce the risk to cyclists, pedestrians and motorists come as cities are trying to become more bike-friendly, and people increasingly turn to electronic devices to communicate and navigate.

“If they want to share the road, they have to share the responsibility as well,” said Massachusetts state Rep. Steven Howitt, a Republican, who has introduced a bill that would prohibit bicyclists from wearing headphones.

Bicycle advocates say cyclists should use common sense and not use hand-held electronic devices at all when riding. Nor should bikers use headphones if they are distracting. But advocates also say there’s no evidence that such use has resulted in deaths or serious injuries, and question whether creating laws or slapping fines on cyclers makes sense.

“There’s a huge difference between distracted driving that kills someone and distracted biking that doesn’t,” said Peter Wilborn, founder of Bike Law, a network of personal injury lawyers that focuses on cycling issues. “I don’t think we need laws specifically for this.”

Most state laws don’t directly deal with cyclists using cellphones or texting. But at least seven states—California, Delaware, Florida, Maryland, New York, Rhode Island and Virginia—specifically include bicyclists in their laws restricting or banning the use of headsets or earplugs. An eighth state, Pennsylvania, prohibits people driving vehicles from using headsets, a prohibition that likely applies to bicycles, which are defined as vehicles in that state, AAA says.

Delaware bars cyclists from wearing earplugs or headsets covering both ears. Maryland does the same, except when cyclists are riding on bike paths. In Rhode Island, bikers or drivers who wear earphones, headsets or other listening devices are subject to an $85 fine for a first offense, $95 for a second and $140 for a third or subsequent offense. The state does allow the use of cellphone headsets that provide sound through just one ear.

And in Massachusetts, Howitt’s bill is pending in the Joint Transportation Committee. Drivers can’t wear headphones in the state, and it should be the same for bicyclists, he said.

“In this age of electronics and constantly being entertained, I see bicyclists with headphones on, particularly in the city [Boston],” Howitt said. “A biker could be cutting across an intersection, and an ambulance is coming through and he’s not hearing it if he’s playing music very loud.”

Ken McLeod, with the League of American Bicyclists, said his cycling advocacy group supports allowing bikers to choose whether to wear headphones. He said he is unaware of any research on the impact of using headphones on cyclist safety so his group is unlikely to support laws that ban their use.

When it comes to cellphones and texting, McLeod said his group promotes hands-free biking, and if cyclists are getting distracted, “it’s an appropriate area to be regulated.”

“You’re most in control of your bicycle if you have both hands on the handlebars,” he said. “Anything that detracts from that is probably going to make you less safe.”

But McLeod warned there could be problems with how cities or states enact and enforce distracted biking laws. Many cyclists, for example, mount cellphones on their handlebars and use them as training devices, with apps that track everything from speed to revolutions per minute, and they shouldn’t be penalized, he said.

And cyclists using cellphones or wearing headsets are more likely than drivers to be arbitrarily targeted by police because they are more visible, McLeod added.

“If they’re going to be doing more enforcement of distracted biking than distracted driving, that’s not the answer,” he said. “They need to invest more in cracking down on dangerous behavior by drivers because that’s what causes death and injuries.”

New York state Assemblyman Jeffrey Dinowitz, a Bronx Democrat, said he has tried for years to get a bill passed that would prohibit cyclists in the state from using hand-held cellphones or texting. Drivers in New York already are banned from using them.

“It’s likely that if you’re holding the phone with one hand, you’re certainly distracted,” he added. “This bill would hold bicyclists to the same standard as motorists, when it comes to cellphones. It’s something our state should do, and other states should do the same thing.”

But most legislatures haven’t addressed distracted biking. And in the small number of states where bills have been introduced in recent years, they haven’t met with much success.

In California, the Legislature passed a bill in 2011 that would have extended the state’s hands-free, no-texting law to bicyclists. But the measure included provisions unrelated to bikers and was vetoed by Democratic Gov. Jerry Brown.

Distracted biking legislation also has failed in Oregon, New York and Virginia, according to Douglas Shinkle, a transportation policy expert for the National Conference of State Legislatures.

Shinkle said he has heard from legislators concerned about distracted biking, but the issue hasn’t gotten much attention because it is still relatively new. Traffic safety researchers aren’t entirely sure how much it occurs and to what degree it increases risk, he said.

“There’s the need for more research on this because it’s not a well-understood issue,” he said. “I wouldn’t be surprised if there are more bills introduced in the next couple of years, given that a number of cities have instituted such laws.”

Chicago, Philadelphia and Bozeman, Montana, are among the cities that have passed laws prohibiting cyclists from using handhelds.

In Chicago, the City Council passed an ordinance in 2011 barring cyclists from using their cellphones to text or talk without a hands-free device, technology that allows people to use mobile phones without holding them, usually through voice commands. Violators are subject to a $20 fine for the first offense and up to $100 for the third and further offenses. If the offense occurs during a traffic accident, violators could pay up to $500 more.

Last year, the Flagstaff (Arizona) City Council passed a law banning texting while biking or driving. Violators face a fine of $100 or $250 if a crash is involved.

In Austin, Texas, a law prohibiting both drivers and cyclists from using handhelds went into effect in January. Violators can be fined up to $500.

“We consider a bicycle a vehicle on the roadways,” said Samantha Alexander, of the Austin Transportation Department. “We want them to follow the same vehicle laws, such as stopping at the stop signs. The crux behind it was safety.”

Since February, police have cited bikers only three times for violating the hands-free ordinance, according to John Walker, of the Austin Municipal Court.

In New York City—where more than 300,000 trips a day are made by bike—the City Council Transportation Committee is considering a bill that would allow police to ticket cyclists who talk or text on a hand-held phone. First-time violators could avoid a $50 fine by taking a biking safety course, unless they injured someone or damaged property. Those cited more than once in 18 months would face an additional $50 to $200 penalty.

Democratic Councilman Mark Treyger, who sponsored the legislation, said he became concerned about the issue after witnessing a cyclist who, while texting on his phone, veered into oncoming traffic and nearly caused a multicar crash.

“Biking and texting is a dangerous practice,” Treyger said. “Not only can they hurt themselves, but they can hurt others around them.”

Although Treyger calls his bill the most “progressive” in the nation because of its safety course option, the measure has riled some of the city’s cycling advocates. They argue that police should spend their time focusing on dangerous drivers, not targeting cyclists on cellphones.

Treyger said he agrees dangerous drivers are a significant problem and motorists should bear the most responsibility.

“But the fact is there are more and more people biking in our city and we need to make sure we are promoting and encouraging safe and responsible biking,” he said. “If we’re serious, everyone—motorists, bikers and pedestrians—has to do their part.”