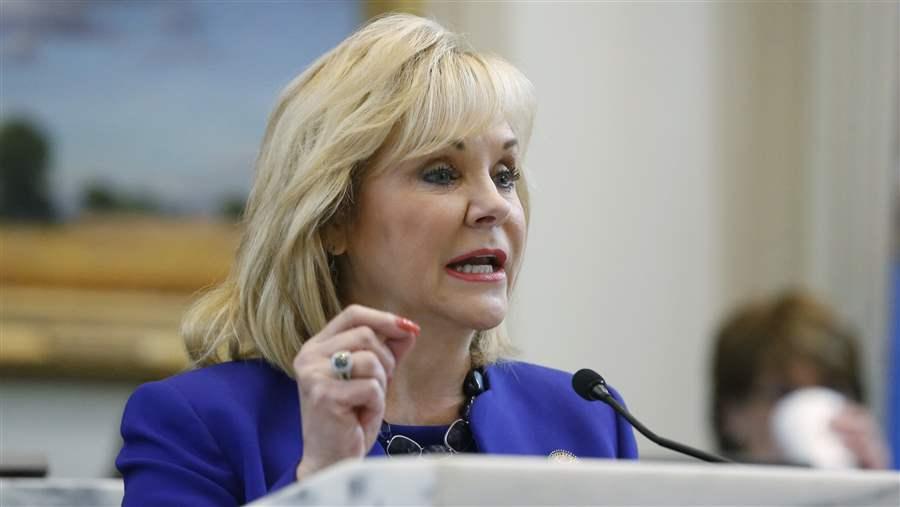 Oklahoma Republican Gov. Mary Fallin addresses the Legislature in 2014, when she called for a tax cut. A cut now is triggered to kick in Jan. 1, despite a shortfall in revenue.

When January rolls around, almost every Oklahoma taxpayer making over about $9,000 will get a state income tax cut. That’s the good news. The bad news is the state’s current revenue stream isn’t large enough to cover it.

How could that happen in a state known for fiscal conservativism? The dichotomy comes because Oklahoma instituted a tax “trigger” two years ago that relied on revenue estimates to give the stop or go sign on granting the cut. But estimates are not reality. And a difference between what was estimated and what the state actually realized in tax revenue has caused the gap.

“Oklahoma can stand as a model for the terrible thing about triggers,” said David Blatt, executive director of the Oklahoma Policy Institute, a nonpartisan think tank. “Our experience shows that it is very hard to get them right and very easy to get them wrong.”

At least six other states — Colorado, Massachusetts, Missouri, New Hampshire, North Carolina and Oregon — have implemented tax cut “triggers” in the past two years that give refunds, credits or a reduction in rates to taxpayers or businesses on the grounds that government shouldn’t hoard their money if it has sufficient revenue to run the state.

Massachusetts taxpayers saw their personal income tax rate drop from 5.2 percent to 5.15 percent in January. Oregon taxpayers will get $402 million in tax credits, or about 5.6 percent off their individual state income taxes, when they file their 2015 returns next year. North Carolina businesses will get a cut in corporate income taxes in January.

And Michigan taxpayers can possibly expect a break in the future. Republican Gov. Rick Snyder signed a bill last week that will roll back the individual tax rate in any year that state revenue exceeds 1.425 times the rate of inflation, beginning in 2023.

The triggered breaks appeal to politicians because they hold out the prospect of a tax cut for voters, while not granting it unless certain revenue targets are met. The intent is to have enough revenue to pay for the cut. But as the Oklahoma example shows, that’s not always the case. And once a tax cut is set in law, it is politically hard to reverse. Voters want that money.

Some budget analysts question whether automatic triggers represent good fiscal policy and suggest it’s more prudent to simply vote for tax cuts when state treasuries are flush than rely on an inflexible mechanism. The triggers also can backfire politically.

Michael Leachman of the Center on Budget and Policy Priorities, calls triggers “a bad idea” because they can financially hamstring state lawmakers in responding to emergencies that demand greater spending, and therefore revenue.

“If you have a tax based on a blind formula, that formula doesn’t know when the next recession might hit or when another need might arise in the state,” Leachman said. “Emergencies come up. There might be a natural disaster.”

The trigger trend began in California in the 1990s, according to Mandy Rafool, a state tax expert at the National Conference of State Legislatures. But in California, the taxes went both ways, up or down depending on the revenue raised in the preceding year.

That had political consequences. In 1998, California used a revenue trigger to cut vehicle license fees. But then revenue fell, and the fees tripled. That, a budget shortfall, and increases in utility bills outraged voters who kicked then-Gov. Gray Davis, a Democrat, from office in a recall election in 2003 and replaced him with Republican Gov. Arnold Schwarzenegger. Schwarzenegger rescinded the trigger on license fees.

In Oklahoma, the income-tax trigger has coincided with the plummeting price of oil, which the state taxes, contributing a large share of revenue. Lower oil tax receipts will contribute to a revenue shortfall in the current budget that could exceed the $611 million hole that the state had to fill in its last budget that ended June 30.

But the Legislature and Republican Gov. Mary Fallin are disinclined to take away the triggered tax cut, which the State Board of Equalization authorized in December 2014, based on revenue estimates at the time.

Under the cut, the top income tax rate is slated to go from 5.25 percent to 5 percent in January. The cut is expected to have widespread impact because the top rate applies to individuals who make more than $8,700 annually or couples earning more than $15,000.

In December, Fallin said she was “pleased” that the trigger had taken effect, echoing her pleasure at signing the original legislation in April 2014, when she said it was “a responsible, measured tax cut that will make Oklahoma more economically competitive while providing much-needed tax relief to working families.”

But no sooner had the board authorized the cut than oil prices sank and revenue began to fall. Two months later, it was $300 million lower. It’s been decreasing ever since. Now, the state is looking at what spending to cut to balance its current budget. A decision needs to be made by the time the 2016 legislative session ends on May 27.

John Estus, spokesman for the Oklahoma Office of Management and Enterprise Services, said most of the state’s money problem stems from the drop in oil prices. But he said the triggered income-tax cut, which relies on revenue estimates, doesn’t help.

“Comparing an estimate to an estimate is not something our office saw much merit in,” he said. “If taxes were higher, there would likely be at least a little more revenue.”

An epic budget stalemate in New Hampshire this year ended in a compromise that included a tax cut trigger. Republicans wanted business tax cuts that they said would spur economic growth. Democrats, including Gov. Maggie Hassan, balked, worried that the state’s revenue would not cover expenses. The compromise reduces two business tax rates in 2017, and again in 2019 under a trigger if revenue in the next two-year cycle exceeds $4.64 billion by a certain amount.

New Hampshire Senate Majority Leader Jeb Bradley, a Republican, said he expected revenue estimates would be met to trigger the second round of cuts. And he said that if the state got into a financial bind, the Legislature could vote to rescind the cuts.

“A future legislature could come in and say, ‘Even though we have the trigger met, we have problem … and we need to fix it,’ ” he said. “It’s not like it’s constitutionally protected. It’s always a political issue to vote for a tax hike.”

But legislators in states with triggers built into their state constitutions don’t have that flexibility.

Colorado is a state with a constitutional trigger, and lawmakers had to go to voters earlier this month to ask them for approval to spend $66.1 in taxes collected from the sale of recreational marijuana. The voters agreed, and some $40 million of it will go to pay for school construction, and $12 million of it will go to youth and substance-abuse programs.

Without the voters’ approval, taxpayers would have received a $25 million rebate — ranging from $6 to $16 per person, depending on their income level.