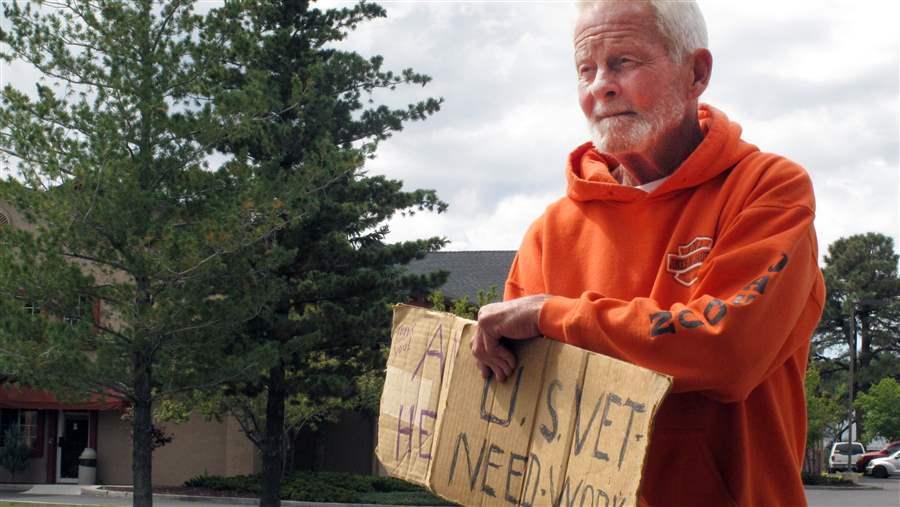 A panhandler standing on a corner in Flagstaff, Arizona, asks passersby for help. Cities that have cracked down on panhandling have met resistance in the courts.

Many cities—and even some states—increasingly are cracking down on panhandling, driven in large part by the unlikely combination of thriving downtowns and the lingering effects of the Great Recession.

The number of cities with outright bans on panhandling increased by 25 percent between 2011 and 2014, while the number of cities with restrictions on begging in specified public places, such as near schools or banks, rose by 20 percent, according to a report by the National Law Center on Homelessness & Poverty, an advocacy group.

In Cincinnati, where begging is already banned near ATMs, parking meters and restaurants, the city is considering a ban on panhandling within 50 feet of schools. In July, Tennessee outlawed aggressive panhandling, making it a misdemeanor for panhandlers to touch strangers without their permission, block their path, follow them or make threats. In May, Utah banned panhandlers from soliciting in traffic, and the same month Atlanta outlawed panhandling throughout a swath of downtown.

In July, in a seemingly unrelated case that did not involve panhandling, the court ruled that the town of Gilbert, Arizona, could not restrict the size of a church’s signs advertising its services. In deciding for the church, the court reaffirmed that, in most cases, “content-based” speech restrictions—restrictions based on the content of the message—are unconstitutional. In contrast, “content-neutral” restrictions, such as even-handed restrictions on noise or blocking traffic, generally are allowed.

At least three federal judges have struck down existing city panhandling laws or sent the cases back to the lower courts since the Gilbert ruling, which was cited in some instances, according to Maria Foscarinis, founder and director of the National Law Center.

Supporters argue anti-panhandling laws don’t violate free speech protections because they are “content-neutral”—they regulate the manner in which people ask for money, not what they say in asking for it. They liken the laws to restrictions on how close anti-abortion protesters can be to a clinic entrance.

“It’s the approach, not what they are saying,” said Steven Rahn, assistant corporation counsel for Springfield, Illinois, which lost against a legal challenge to its panhandling laws in August. The city is planning an appeal to the U.S. Supreme Court.

Panhandling laws aren’t designed to hurt the homeless, the proponents say. On the contrary, they argue that giving money to panhandlers enables addicts and prevents them from getting the help they need.

But many homelessness advocates say the laws aim to criminalize poverty and homelessness.

“To say we want it to be illegal for somebody who’s flat broke to beg for alms—that’s going back to 1700s pauper prisons. That’s just mean,” said Paul Boden, the director of the Western Regional Advocacy Project, a San Francisco-based coalition of groups focused on poverty and homelessness in Western states.

Anti-vagrancy laws have been on the books since Colonial times, but anti-panhandling laws have spread in recent years. The recent uptick is the result of several factors.

The Great Recession and the foreclosure crisis dramatically increased rates of homelessness, particularly among families, Foscarinis said. At the same time, she said, cities across the country started experiencing a renaissance of development in their downtown districts.

“Cities are being pressured to ‘do something,’ ” said Foscarinis, whose law center represented panhandlers in lawsuits filed against Springfield and Boise, Idaho. “The idea is that visible poverty is bad for tourism and bad for business. A lot of cities have chosen a quick fix response, passing a law making it a crime to be poor.”

Homelessness advocates say the anti-panhandling laws are just one of several ways cities are criminalizing activities that homeless and poor people rely on to survive, like camping in public, sleeping or sitting in public and sleeping in vehicles. Some cities, such as Fort Lauderdale, Florida, have passed laws forbidding feeding the homeless in public places such as parks.

Between 2013 and 2014, overall homelessness has decreased by just over 2 percent, according to the National Alliance to End Homelessness. In a single night in January 2014, about 578,424 people slept on the street or in a shelter. But that number does not take into account the millions who are living in motels or doubled up on a friend’s couch or living in substandard housing, homeless advocates say. Meanwhile, the number of people living in poverty (4.8 million) and the poverty rate (15.8 percent) during that same time remained steady, according to the National Alliance.

Only about half of panhandlers are homeless, the other half of them are just extremely poor, said Susie Sinclair-Smith, director of the Montgomery County (Maryland) Coalition for the Homeless.

Some surveys have shown that panhandlers tend to be relatively young—in their 30s and 40s—single men with limited education and few family ties. Some struggle with alcohol and drug addictions. Some are caught in a cycle: They move from being homeless to having housing but being extremely poor, advocates say.

Municipalities that enact panhandling ordinances are not objecting to poor people asking for money, said Ken Paulson, president of the nonpartisan First Amendment Center. “They are objecting because they believe those who ask for help incessantly and in highly visible places create a nuisance. But it’s not that easy.”

Governments can’t restrict citizens from asking for money, any more than they can prevent citizens from expressing support for a particular political candidate, Paulson said. He acknowledged that some anti-panhandling laws were meant to protect citizens from “aggressive panhandlers who don’t take no for an answer.” But he said other laws bar such behavior without restricting free speech.

“The greatest misunderstanding about so-called ‘panhandling’ is about what it actually is. It is one citizen asking another citizen for help. It’s that basic,” he said. “The notion that government somehow has a right to limit one citizen asking for help is unsettling. That is the essence of free speech. Government really doesn’t have a role in this.”

Many courts have endorsed that view.

Last month, Denver, Colorado Springs and Boulder suspended their panhandling laws after a similar ordinance, in Grand Junction, was ruled unconstitutional by a federal judge. The Grand Junction ordinance banned begging at night, using intimidation tactics, soliciting an “at-risk” person and panhandling on a public bus, among other provisions.

Also last month, a federal judge struck down a panhandling ordinance in Lowell, Massachusetts, ruling that panhandlers "may communicate important political or social messages in their appeals for money, explaining their conditions related to veteran status, homelessness, unemployment and disability.''

In August, a federal appeals court reversed a previous decision upholding the Springfield panhandling law, which prohibited verbal requests for donations in the city’s historic downtown district. After the ruling, the city amended the ordinance to prohibit panhandlers from coming closer than 5 feet in making their requests. Civil rights groups, representing panhandlers, have sued the city to overturn that law, too.

“I had the sense that it was not good for tourism. And local residents were upset by frequently being approached by panhandlers,” said Sam Cahnman, who proposed the Springfield measure as a city alderman in 2007 after businesses complained. His proposal amended an existing ordinance.

Cahnman said he knew other cities, such as Fort Lauderdale, had been able to restrict panhandling in certain locations, like its popular beach strip. He said he wanted to help the homeless, but that prohibiting panhandling in the city’s downtown made sense.

“I thought at the time it was constitutional, and I still do. I hope the Supreme Court takes this case and deals with it head on,” Cahnman said. “We need them to clarify the law on this.”