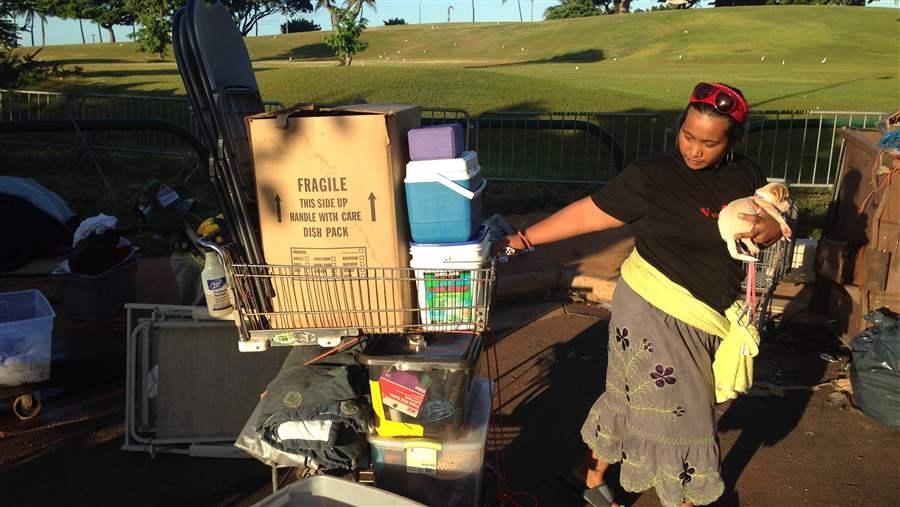 A homeless women pushes her belongings as officials in Honolulu begin to clear out the tent encampment where she’d been living. Hawaii and some West Coast cities have turned to emergency declarations to deal with homelessness.

Governments typically declare a state of emergency to deal with natural disasters like hurricanes and wildfires. But over the last two months, several West Coast cities and one state have used the declarations to tackle a worsening homeless crisis.

Hawaii, Los Angeles, Seattle and Portland, Oregon, have all declared states of emergency, using the proclamations as a way to loosen up funds or bypass ordinances to take swifter action.

Other cities and states across the country are also grappling with rising homelessness. With shelters at capacity, Washington, D.C., started housing families in motel rooms to help pre-empt the surge of people looking for winter shelter. In New York City, where most homeless people are housed in shelters, the city is looking to add 500 beds for the winter.

But the emergency declarations represent a new approach. One motivation is to publicize the problem, but officials say the declarations are more than a public relations gambit and will lead to big changes for the homeless in their cities.

“It has created a sense of emergency, and it describes the situation because we’re in a crisis. We’re galvanizing attention and getting the resources we need to address the problem,” said Greg Spiegel, homelessness policy director for the mayor of Los Angeles, Democrat Eric Garcetti.

In Hawaii, Democratic Gov. David Ige’s 60-day declaration extends contracts with homeless services providers and sets aside money for a family shelter. Kimo Carvalho of the Institute for Human Services, which describes itself as “the state’s homeless shelter,” said the declaration was intended to solve “a bureaucracy problem.”

“It’s a way for the government to do something about a problem actually happening now,” rather than waiting for the Legislature, Carvalho said.

Other homelessness advocates say the declarations are aimed at addressing a polarizing problem, but it’s too soon to know whether they will prove effective.

“These states of emergency are addressing a feeling people have. People are upset about the encampments and people on the street—whether it’s because they feel sorry for them or because they don’t like them,” said Nan Roman, president of the National Alliance to End Homelessness.

In some places, the declaration preceded concrete plans to address the problem.

Los Angeles declared a state of emergency in September, but doesn’t expect to finalize its plans—which are likely to include suspensions of some ordinances to allow for more shelters and speedier permitting of affordable housing—until the beginning of next year. Portland took a month after announcing its declaration to roll out details of its plan.

And unlike federal disaster declarations, which bring a rush of federal funds to help deal with an emergency, local emergency declarations leave cities and states to come up with their own funds.

Garcetti said Los Angeles, where the state of emergency will remain in place until the city council ends it, will commit up to $100 million. In Hawaii, Ige’s emergency proclamation opens up $1.3 million from the state’s general fund.

In some places, declaring a state of emergency allows city officials to bypass certain zoning ordinances and other hurdles. That is the case in Portland, where officials say restrictive zoning has made it tough to quickly create shelters to house the homeless.

Dana Haynes, spokesman for Charlie Hales, the Democratic mayor of Portland, said the zoning policies were preventing churches from housing people at night and keeping shelters a certain distance from one another—leaving homeless people huddled together in certain parts of the city without a place to sleep.

The city is considering proposals to open new shelters that bypass these codes, but says the groups behind them must show consideration for public safety. Portland is also evaluating city-owned spaces in areas that, though not zoned for shelters, could be used for that purpose, at least temporarily.

“We’ve had churches saying that they’ve been wanting to do this for years and can go ahead and get everything together in two weeks,” Haynes said.

Haynes said Portland can only suspend the rules while the state of emergency is in place, but could make some of the changes permanent through regular city council approval.

Mark Putnam, director of All Home, a partnership between Seattle’s city and county governments and various organizations fighting homelessness, said the additional flexibility provided by the state of emergency should help more people qualify for affordable housing programs. Social service agencies will also be able to spend about $1.5 million in nontraditional ways, like helping low-income people cover expenses that might keep them from paying rent, like utilities and transportation costs.

In Hawaii, the emergency declaration from Ige expanded shelter options for families who wanted to remain together. In Seattle, city and county government plan to add 150 shelter beds. And Portland’s lifting of zoning ordinances was designed to allow for more shelter space.

But significant barriers remain. Many shelters don’t allow people to come with their partners, their pets or most of their belongings. They may not be permitted to cook their own food or keep their own schedules. Because shelters bar drug and alcohol use, many with addiction issues choose to stay away.

That resistance to shelters showed in Honolulu, where, as the city prepared to clear tent encampments in local parks, social workers visited to offer services, including shelter, to the homeless. While nearly half of the 300 residents moved to shelter or permanent housing, many of the remaining people moved to two nearby state parks, prompting Ige to announce the state would begin clearing the state parks as early as this week.

Many governments are thinking beyond shelters and other short-term solutions.

Many cities and states, even those that have declared states of emergency, are investing more in long-term affordable housing, whether by constructing new housing or spending more money on existing programs to help people stay in private housing.

Those programs offer various types of affordable housing and rapid rehousing, including subsidized units, security deposit assistance and permanent supportive housing. In many cases, tenants pay 30 percent of their income in rent and may even be matched with nearby caseworkers who help them stay in housing and connect to services.

In Portland, the city is using $61 million, most of it federal money, to build new affordable housing units. In order to use those funds, developers must keep rent at an affordable level for 60 years before charging market rates.

Some of the local funds will come from quick changes the city made to its economic development districts, which will now divert 45 percent, up from 30 percent, of property tax revenue to affordable housing projects. The city also recently came to an agreement with Airbnb over how to tax the company’s rentals, which Haynes said would bring in more than $1 million a year that will go toward affordable housing.

Los Angeles is taking a similar approach, looking to create more affordable housing and bolster its existing programs, both to house the homeless and to prevent those at risk from becoming homeless.

But not all homelessness advocates think affordable housing is the best approach.

Andy Bales, CEO of Union Rescue Mission, a rescue mission in Los Angeles, said the city has been trying the same approach for years with few successes.

Los Angeles has about 25,000 homeless people, and Bales said the city cannot build enough affordable housing quickly enough to make a dent. Meanwhile, people are living on streets known for their violence and have no access to toilets or showers.

Bales works on Skid Row, and knows the squalid conditions there firsthand. In 2013, he contracted three types of flesh-eating bacteria in his feet while walking the streets there, and he must now use a wheelchair.

The homelessness problem has only gotten worse, he said, and even though people may want the homeless off the street, they have nowhere to go while they wait for affordable housing.

“With vast resources shifted toward one solution and an already weak safety net, you get bigger holes in that safety net,” he said. “We need a place for people to stay while they’re on the list for housing.”