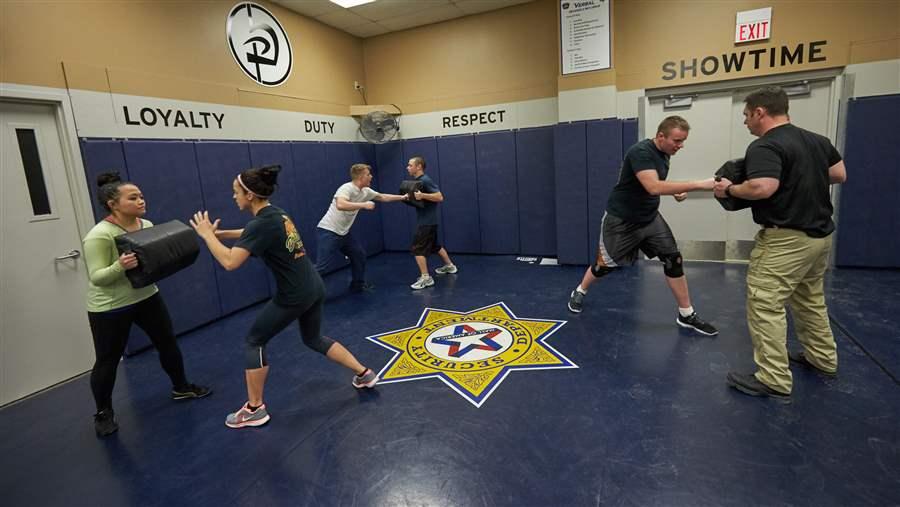 Security team members at the Mall of America near Minneapolis train in February following a terrorist threat. Dozens of bills were filed across the country this year to beef up training of security guards and tighten industry oversight, but most went nowhere.

At an Iowa mall, a security guard allegedly shot and killed a woman who worked at a children’s museum there. At a Kentucky distillery, a security guard accepted money from thieves to look the other way while they stole more than $100,000 in expensive whiskey. And in a Virginia hospital, a 64-year-old man suffered a serious head injury and later died after a violent altercation with a security guard.

Recent incidents like these have drawn fresh attention to the screening, training and state oversight of private security officers, and have prompted some legislators to push for stricter regulation—efforts that have been largely unsuccessful this year.

“We’ve got to feel comfortable that people who have a badge on are, in fact, trained—and trained well,” said Michigan state Sen. Darwin Booher, a Republican who sponsored a set of bills, still pending, that would update regulations on security guards in the state.

About 90 bills were introduced in state legislatures this year dealing with the licensing and training of security officers or requirements for security companies, according to Steve Amitay, director of the National Association of Security Companies (NASCO), an industry group. In recent years, similar numbers of measures have been proposed. None of this year’s bills that would have substantially toughened state requirements was enacted, Amitay said.

“In some of these states, it’s a very anti-regulatory environment and they think any additional regulation on businesses or people performing services is bad,” Amitay said. “With other folks, it’s a resource issue. For the state to start regulating an industry and requiring licenses requires initial appropriations and startup costs.”

In Connecticut, a bill that would have required security guards to get more training died in the Senate. In Washington state, a measure that would have mandated FBI criminal background checks for all applicants never made it to the House floor.

In California, Democratic Gov. Jerry Brown vetoed a bill that would have made bouncers and plainclothes guards subject to the same licensing requirements that apply to private security officers.

Forty-one states, plus the District of Columbia, license security officers, but requirements vary greatly from state to state. Alaska, for example, mandates 48 hours of training initially, plus another eight hours in firearms training for armed guards. South Carolina requires four hours of training and an additional four for those who carry a gun.

While nine states—Colorado, Idaho, Kansas, Kentucky, Mississippi, Missouri, Nebraska, South Dakota and Wyoming—do not license security officers at the state level, some cities within them do, according to NASCO. Mississippi does require that guards get a separate permit to carry a gun. And 22 states have no training requirements for unarmed security guards; 15 of those have none for armed guards, either.

“It’s a hodgepodge. It’s an extreme variety of approaches,” said Charles Nemeth, a professor at John Jay College of Criminal Justice who directs its Center for Private Security and Safety. “Some are better than others; some are nonexistent.”

More than 1 million security guards work in retail stores, hospitals, sports stadiums and other locations, according to the U.S. Bureau of Labor Statistics. They typically are responsible for protecting property, enforcing rules, conducting security checks and deterring criminal activity, and had a median salary of $23,970 in 2012.

Most work for a security company that contracts its services. Others are hired directly by a business or corporation.

While the vast majority don’t carry weapons, those that do have raised special concerns. A 2014 investigation by the Center for Investigative Reporting and CNN found poor oversight and little accountability of the armed guard industry. Twenty-seven states did not check whether armed guard applicants were in a federal database banning them from carrying a gun and nine did not conduct federal criminal background checks, the investigation revealed.

There are no federal standards for training security officers—armed or unarmed—so it’s left to the states. Basic training usually involves learning how to administer CPR, the proper use of force, how to deal with the public and fill out reports, and how to report suspicious activities and interact with police.

Sandi Davies, director of the International Foundation for Protection Officers, a nonprofit that gives training certificates to security guards, said states should require at least 40 hours of basic training—most don’t.

“We want a more trained and skilled officer to protect our premises. They need to be able to identify threats,” Davies said. “I can’t for the life of me think that anyone should be in a position of authority without at least 40 hours of training.”

Amitay of NASCO said his group, which represents many of the larger security companies, also supports higher standards and training requirements, and many of its members’ background checks and training go beyond what states require.

The thousands of smaller security companies that operate may or may not do the same. “In some states,” Amitay said, “all you need is a business license and you can start a private security firm and hire people off the street.”

Some small security companies have fended off legislative attempts to beef up regulations, Amitay said. Additional requirements could be costly for them because they would have to outsource training or hire trainers, he said.

But opposition doesn’t only come from smaller companies, Davies said. “Sometimes, the large contract agencies don’t want to spend the money because it really affects their bottom line. They have the lobby power.”

Some legislators who support stricter regulation of the private security industry say they are disappointed their efforts this year haven’t succeeded.

Connecticut Democratic state Rep. Stephen Dargan, who co-chairs the Joint Public Safety and Security Committee, said the spate of school shootings and other mass shootings in recent years has increased the sense of urgency.

“With what’s going on around the country right now and after our horrific incident in Newtown, we thought this was an important issue,” Dargan said. The committee introduced and passed the security guard legislation, which died in the Senate. It would have hiked the required training hours for licensed guards from eight to 16 and mandated 16 hours of firearms training for armed guards.

“Sometimes, you get pushback from some of these security companies,” Dargan said. “Often, in tough economic times, it’s the cost factor.”

In Michigan, which currently does not require training, a set of bills is still in play that would update regulations and require 32 hours of training for security guards and another four for those armed with guns.

Booher, who sponsored the package, said he has tried to get this type of legislation passed for several years, but faced opposition from some colleagues who balked at adding, rather than eliminating, regulations. The measures cleared the Senate this spring and have been referred to a House committee.

“It’s been slow going. But then we had a person killed at a mall near Detroit by a security guard last year, so more and more legislators have become interested,” Booher said. “It’s been a long time coming.”

Security officers’ jobs can be dangerous and sometimes their efforts can be heroic.

In 2009, a guard died in a shootout with a white supremacist at the United States Holocaust Memorial Museum in D.C. Last year, a drugstore guard in Detroit was killed trying to save a woman and child from a carjacking in the store’s parking lot. And in Pennsylvania, a 70-year-old high school security officer was stabbed in the chest while trying to stop an attack by a teenager who allegedly stabbed 20 of his classmates. The guard and the injured students survived, and the suspect was arrested.

A 2012 Bureau of Labor Statistics study found that security guards were fatally injured in the workplace at a rate more than twice that of workers in general.

The threat of terrorism in recent years also has brought greater attention to the role of security guards, particularly at malls and other “soft targets.”

While the industry is trying to prepare for these threats, John Jay’s Nemeth said, it still faces a more basic problem: It is not thoroughly screening entry-level officers before hiring them.

“I think the largest problem security faces is bad people,” Nemeth said. “There’s been a tremendous de-emphasis on whether you have good character or not, like whether you’ve been arrested in the past for drug use or you can’t get good references from people who know you.”

When security officers get into trouble, it often involves sexual misconduct or internal theft and fraud, Nemeth said. “There are many more cases of that than of security guards shooting people. Stealing is a massive problem in the retail sector.”

Davies, of the training foundation, said the industry also needs to hike salaries and reduce turnover. Ultimately, her group would like to see a national standard of 60 to 80 hours of training.

“Your security officer is often your first responder,” Davies said. “With today’s threats—workplace violence issues, school shootings—you want this person to be prepared and well trained. Bringing someone in with little or no training, what’s the value? It’s more of a detriment, and it can be the difference between life and death.”