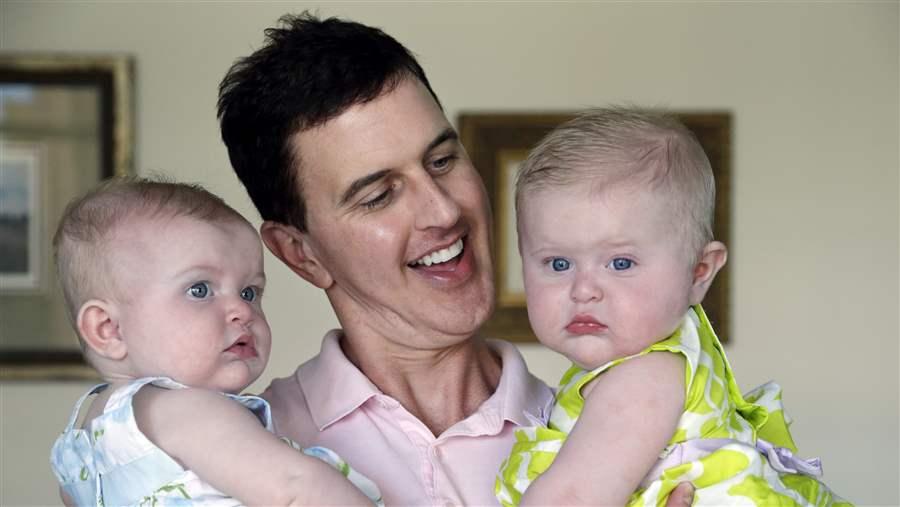 Trey Powell holds his 6-month-old daughters, Kylan, left, and Ashton, in their home in Seattle in 2013. The twins were carried by a surrogate mother in California. Washington is among the states that don’t allow surrogate mothers to be paid.

PORTLAND, Oregon—Matt cried at the birth of his son a couple of weeks ago. His husband, Sylvain, was outwardly more composed, but no less transfixed as his newborn blinked his eyes at a bright, unfamiliar world. The woman who gave birth to the child was the calmest of the lot. She alone had been through this before—twice, in fact. Besides, this wasn’t even her baby.

A paid surrogate, she had had two fertilized eggs (from an egg donor) implanted in her uterus. She had carried the baby for nine months, lost its twin during the pregnancy, endured false contractions, and finally gritted her teeth through three hours of labor. And although she took a turn holding the baby and pumped breast milk for him, all her responsibilities toward him ended at birth, while Matt and Sylvain, French nationals recently transplanted to New York City, dove into the deep end of parenting.

That all this occurred in Oregon was not an accident. Although the state is home to far fewer surrogacy births than the much more populous California, it nonetheless has earned an outsized reputation as a place that welcomes surrogacy. It offers a legal system that is supportive of the practice—allowing surrogates to be paid and the names of intended parents to appear on birth certificates—as well as a supply of surrogate mothers and healthy egg donors, and integrated medical and legal teams that make a once unimaginable biological and legal process virtually seamless.

For Matt and Sylvain, who asked that only their first names be used because they intend to return to France, where paid surrogacy is barred, Oregon also provided the additional benefit of being gay friendly.

“We couldn’t be more thankful to Oregon,” said Matt, a 30-year-old banker, who, along with Sylvain, contributed sperm to fertilize the two donor eggs.

Oregon and seven other states—California, Connecticut, Delaware, New Hampshire, Maine, Nevada and Rhode Island—have laws and procedures that are welcoming to gestational surrogacy, that is, births in which the woman who delivers is not genetically related to the child and will not be its legal parent, according to Creative Family Connections, a Maryland law firm that specializes in surrogacy and tracks state laws related to the practice.

That leaves the rest of the country in a fuzzy area in which surrogacy is permitted, but with some limits on whether the surrogate can be paid beyond medical expenses, whether the state will uphold surrogacy contracts, who can arrange surrogacies, and whether intended parents can be named on birth certificates or be declared legal parents.

For example, in Virginia, only married couples—gay or straight—are permitted to use donated sperm or eggs for conception, and a couple cannot be declared legal parents if neither person is genetically related to the child. In Nebraska, the surrogate must be named as a parent on the birth certificate. In Oklahoma, only married heterosexuals can be named legal parents without being biologically related to a child born through surrogacy.

“We tell prospective parents to make sure they fit a state’s specific criteria and to make sure they can live with the restrictions and the hurdles that state has in place,” said Diane Hinson, founder of Creative Family Connections.

A number of states enacted restrictions on surrogacy in the wake of a 1986 case, in the early days of surrogacy, when a carrier in New Jersey refused to relinquish the baby she had agreed to carry for a couple.

Overall, surrogacy births have become more common in the U.S., often with intended parents contributing sperm or eggs for fertilization as a way to have some biological connection to the child. Live births by surrogate mothers were up more than 160 percent from 2004 to 2013, to 1,939, according to the American Society for Reproductive Medicine.

Many states are likely to revisit their surrogacy laws as a result of the U.S. Supreme Court’s ruling this year that made gay marriage legal nationwide, Hinson said.

Texas and Utah already have removed some restrictions on surrogacy that had only pertained to gay couples. The New Jersey Legislature passed a surrogacy law this year that would have permitted compensated surrogacy, but Republican Gov. Chris Christie vetoed it, the second time he has rejected such a measure. And New York Gov. Andrew Cuomo, a Democrat, is reportedly considering supporting a measure that would allow surrogacy births in the state.

Some conservative groups oppose surrogacy, including the nonprofit Center for Bioethics and Culture, which has lobbied against the easing of surrogacy restrictions. “Surrogacy is another form of the commodification of women’s bodies,” the group says on its website. “Surrogacy degrades a pregnancy to a service and a baby to a product.”

Unless prospective parents have a prior relationship with a surrogate, they generally must pay her to carry their child. The going rate in the U.S.—usually at least $26,000 plus medical and other expenses—is higher than it is in many other countries where surrogacy is legal. But some foreign residents say they are more comfortable pursuing surrogacy here.

A Swedish couple, Matti Ek and Ulf Kläppe, whose daughter was born in Oregon in 2014, could have saved money going elsewhere, but they wanted to be sure their surrogate was not acting out of desperate financial need.

“We could have gone to India, and it might have been a positive experience for the surrogate,” Ek, a clinical psychologist, said by phone from Europe. “But we felt that maybe they would be doing it because they didn’t have any other way to survive. And when our daughter grows older, we didn’t want her to think she had been born because someone was being used.”

Like other parents who have gone through surrogacy, Ek and Kläppe have maintained a close relationship with their surrogate. Carrie, the Oregon surrogate who carried their daughter, Marta Klara Elizabeth, said she and her family are planning to visit Marta and her family in Stockholm next summer. Carrie, who preferred not to give her last name, is pregnant again, carrying a baby for a heterosexual Chinese couple.

One of the big draws of Oregon is the reputation of Northwest Surrogacy Center, which for two decades has provided surrogacy services, including legal support and help with identifying and screening potential surrogate mothers.

John Chally, an attorney who co-founded Northwest, said the center once specialized in adoptions, but as international adoption began drying up in the early 2000s, he began considering alternatives. Chally knew that the desire for children among gay couples was only growing. He also knew that advances in reproductive medicine had greatly increased the success rate of surrogacy births. It was a natural direction for the center to go in.

Northwest, based in Portland, forged a strong relationship with local fertility clinics, particularly Oregon Reproductive Medicine, which is involved in about 200 surrogacy births in a year, according to John Hesla, a reproductive endocrinologist and co-founder of ORM’s in vitro fertilization program. More than 80 percent of ORM’s intended parents come from outside Oregon and more than two-thirds from outside the U.S.

Chally said the center gets about 400 inquiries a month from women asking about becoming surrogates. Of those, about 6 percent are selected, after going through rigorous medical and psychological screening as well as a home visit by a Northwest social worker, he said.

Chosen surrogates must be nonsmokers, 21 to 42 years old, who have had successful pregnancies. They must also convince their screeners that they accept that the child they would carry would never be theirs, and sign documents indicating that they will have no legal connection or obligation once the child is born.

There are many expenses aside from the money paid to surrogate mothers, which usually goes through a surrogacy agency, such as Northwest. The rule of thumb is that surrogacy will cost parents a minimum of $100,000, including legal fees and payments to the egg donor.

Several surrogates said the money they received was welcome, but insisted that their primary motivation was to help a couple who could not otherwise conceive.

That was true of Veronica Bowers, a 30-year-old mother of two from the tiny town of McMinnville, Oregon, who delivered twin girls to a married gay couple from France in April 2014. Bowers said she got the idea after viewing an alarming documentary about a surrogate mother who had lied about her age and her health and delivered a baby 100 days premature and with severe health problems.

“Here I was, holding my own beautiful healthy girl. I thought, I’m really good at being pregnant,” Bowers said. “Both my kids were born at 8 pounds, 10 ounces. Both were born right on their due date. Why shouldn’t I do this for people who can’t do it for themselves?”

It wasn’t easy. She had to undergo weeks of hormone injections to prepare for the fertilized egg to be implanted and to ensure that she didn’t produce her own eggs. Because of complications early in the pregnancy, she was put on 28 weeks of bed rest and needed a full-time nanny to tend to her own children (paid for by the French couple). And finally, although she had delivered both her children naturally, because neither twin’s head was facing down, Bowers was forced to undergo a cesarean section.

And yet, it was easily worth it, she said. “I gave these guys the best gift ever. To see how much love is in their lives, and that I was able to do that for them, it makes it all worth it.”