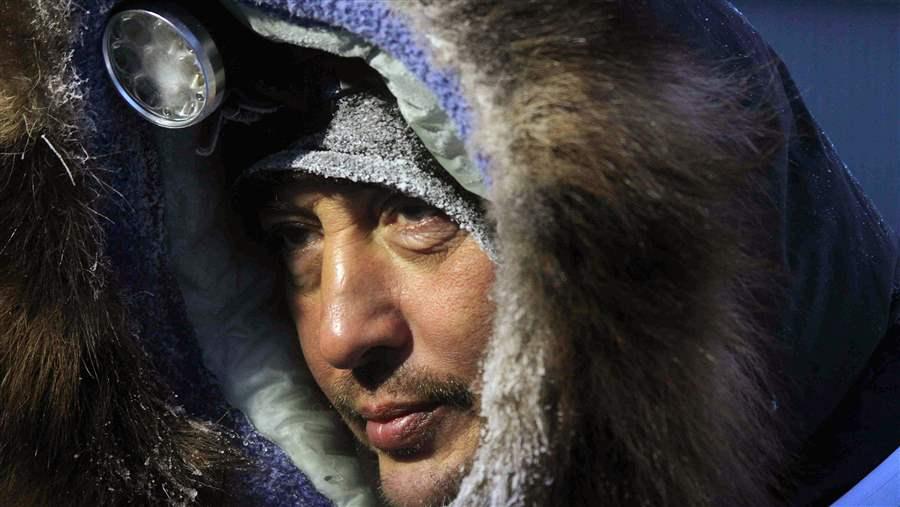 John Baker, the first Alaskan Eskimo to win the Iditarod Trail Sled Dog Race, is working to promote mental health awareness among native peoples after a string of suicides this fall. A nationwide shortage of mental health providers is particularly troubling in states with many languages and cultures.

The U.S. is grappling with a severe shortage of mental health professionals. But the situation is particularly dire for some minority communities, where barriers of language and culture can make it hard to seek and get help.

“It’s difficult to trust that translation will capture nuances in the soul-baring process of mental health treatment,” said Sita Diehl, director of state policy at the National Alliance on Mental Illness (NAMI).

The biggest shortages, according to an April 2014 assessment by the federal Health Resources and Services Administration (HRSA), were in South Dakota, Wisconsin, Alaska, Arizona and Oklahoma, which have only a quarter or less of the psychiatrists, counselors and therapists they need.

Culture and language barriers have complicated the issue in places like Alaska, which saw a string of suicides this fall among Alaska Natives, and New Mexico and Arizona, which have large numbers of Spanish and Navajo speakers.

California, where nearly one in five residents had trouble with English, has created its own system of assessing shortages and is encouraging more bilingual therapists, while nonprofits have taken the lead in other states like New Mexico, Ohio and Texas.

Among states for which data were available, the supply of mental health professionals was greatest in Rhode Island, which had no statewide shortage, and New Hampshire, which had 95 percent of the professionals it needed. (Vermont lacked sufficient data to calculate a statewide number, but did not show a significant shortage.)

The Importance of Understanding

Physicians, nurses and dentists also are in short supply in many areas of the U.S., and language and cultural barriers can hamper the delivery of all kinds of health care. But such barriers are especially relevant in mental health.

The importance of understanding, both linguistic and cultural, in mental health is often underrated, said Majose Carrasco of the National Latino Behavioral Health Association (NLBHA), which funds scholarships and outreach in New Mexico designed to help the state “grow its own” mental health providers.

“I don’t know how many times people have said, ‘It’s fine, we’ll have the janitor translate,’ or, ‘Her kids can translate,’ ” Carrasco said. Using children for translations is “particularly terrible” for mental health purposes.

The consequences of failure to communicate can be dire.

If people don’t get the treatment they need, they get worse and worse, Carrasco said. “You could have suicide. You could have people ending up homeless or in jail.”

Opening Doors with a Toolbox

In Alaska, the importance of culturally sensitive care was made clear in October when a man committed suicide during an Alaska Federation of Natives Convention in Anchorage, which included ceremonies to mark four suicides that had aggrieved the western Alaska village of Hooper Bay earlier in the fall.

The latest effort by Baker, with support from Gov. Bill Walker, an independent, is focusing less on recruiting counselors to remote areas and more on training local volunteers to spot danger signs for suicide, substance abuse and domestic violence so people can get appropriate help before it’s too late.

Training materials are being developed separately for each community with help from their leaders, to ensure that they reflect local values and language, said Katherine Keith, director of the new initiative, Alaskans Changing Together.

For instance, there is a guide to suicide prevention for Yupik Eskimos in western and southwestern Alaska. The Qungasvik, or “toolbox,” describes the scene in a small river community, where “a spirit of suicide and alcohol and drug abuse seemed to walk freely. … It had just claimed two more victims and was looking for more.” It sets out ways to “promote reasons for living and sobriety,” and provides tools to do so.

Another project translates mental health materials from English to the Inupiaq language spoken in northern Alaska so local volunteers can help assess progress in their communities. The goal is to move them from what the program calls denial or “don’t want to see it” to a “high level of community ownership” in which everyone is working together.

“Rather than addressing the need for culturally aware professionals, we are trying to empower all Alaskans to realize there is a lot we can do in the prevention and wellness realm,” Keith said. “Materials definitely need to be culturally appropriate and guiding but not directive. This means we are opening doors for people to walk through.”

In California, where Spanish and Chinese are the most common languages used by those who have trouble with English, the state is taking several steps to address the shortage of bilingual therapists and others.

“The lack of culturally and linguistically appropriate mental health services (e.g., in the preferred language of clients), compounded by mental health stigma, keeps many Latinos with mental illness from seeking services,” was one conclusion of a 2012 study by the University of California, Davis.

To understand and address the gap, the state has started identifying high-need counties with its own system, which supplements the HRSA system.

California is also working to identify homegrown candidates from needy communities, and helping them to pay for education in the field or to pay off student loans if they return home to work in mental health fields.

As part of the initiative, the California Social Work Education Center at the University of California, Berkeley has a contract with the state to encourage more diverse and bilingual students to study mental health as part of graduate studies in social work, said the center’s director, Rodger Lum. Financial aid goes to students at 20 schools in the state.

“Although progress has been made to increase the number of bilingual and bicultural mental health professionals, more can be done,” Lum said.

Many states are looking for ways to encourage more college students to study mental health and continue on to graduate school in the field. But only California is making bilingual and cultural knowledge an explicit priority, said Karmen Hanson of the National Conference of State Legislatures.

In many states, advocacy organizations are left to try to fill the gap.

In Texas, two foundations encourage bilingual students to enter the field. The Hogg Foundation for Mental Health offers scholarships to bilingual mental health students. The St. David’s Foundation helps repay the loans of people who have studied mental health, with priority given to students who are bilingual in English and Spanish or Vietnamese.

The chapter, which provides free support groups and other services in the Cleveland area, lost its sole Spanish-speaking psychologist recently and has not been able to replace her, program director Marsha Mitchell-Blanks said, making it harder to handle anxiety and depression issues in the area’s longstanding Puerto Rican community.

Young Hispanics, in particular, often need help coming of age when their peers and parents have different norms of behavior, she said.

“It’s hard growing up in this country where the culture is so different and parents may espouse these traditional Hispanic cultures,” Mitchell-Blanks said. “It’s really, really important to understand not only the language but the culture. The shortage of professionals, specifically Hispanic, is everywhere.”

As alternatives, the chapter now uses translation services and recruits volunteers from local churches to help translate for its programs, which include information and referral for the mentally ill and their families.

In New Mexico, the NLBHA recruits bilingual students to study mental health and return home to start their careers.

New Mexico has one of the greatest shortages in the nation, with less than a quarter of the need met in the state. Nine percent of its population has trouble with English.

The NLBHA has given 11 modest scholarships to help Latino students stay in college and continue to graduate studies in mental health. The group also goes into high schools to expose students to career possibilities and the rewards of helping others.

There are many reasons why few Latinos enter the field, Carrasco said. “Not enough are finishing high school. Not enough are going to college. Those that do pursue higher education see a stigma in behavioral health fields,” she said, recalling how her mother, a psychologist, told her, “Don’t ever be a psychologist.”

“We need to give students the opportunity to get exposed and decide for themselves,” Carrasco said. “We tell them, ‘You can come back and help your community.’ To them this is very empowering.”