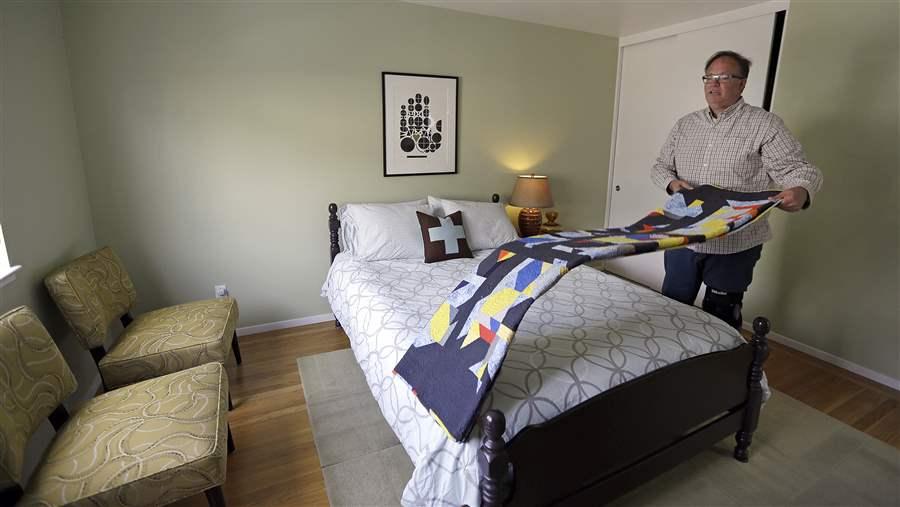 Bruce Bennett folds a blanket in a room he rents out of his San Francisco home. The city votes today on a ballot measure that would more tightly regulate such rentals.

This story has been updated to clarify San Francisco's rules on hosting short-term renters.

Renting out a room, apartment or home to short-term guests was illegal in San Francisco until this February. Yet by the time San Francisco officials legalized home sharing, the city had identified between 5,249 and 6,113 listings on Airbnb.

Websites like Airbnb, HomeAway and FlipKey have fostered a booming short-term rental industry that’s giving policymakers a headache. A growing number of cities are trying to formalize the rentals (defined as 30 days or fewer) and make sure hosts charge hotel and sales taxes, which are an important source of revenue for cities like San Francisco.

States are starting to consider action, too. Nearly two dozen states discussed home sharing this year, according to the American Hotel & Lodging Association (AH&LA). One California bill would let cities and counties require the rental websites to collect and remit sales or lodging taxes. Municipalities could also limit advertising to rentals that comply with local laws and require that booking information be reported to local authorities.

But as San Francisco has learned, it’s difficult to put reins on a market that’s already galloping ahead. City residents vote today on a ballot measure that would further restrict such rentals and, supporters say, make local rules easier to enforce.

Supervisor David Campos, who supports the measure, said it’s aimed at stopping landlords from turning housing into hotels. “Prop F is especially problematic for the commercial user, where you have entire buildings, entire units, that are being Airbnb’d,” he said.

San Francisco’s affordable housing crisis has given its short-term rental debate emotional power. The issue has become so contentious that last month, when Airbnb posted signs around the city to remind residents it pays hotel taxes, the backlash was so strong that the company had to take the signs down and apologize.

To Airbnb or Not to Airbnb?

Home rentals have always been popular in vacation communities like beach towns and ski resorts. But rapidly growing online platforms have made it easy for anyone to list rooms for rent and for travelers to choose homes over hotels.

One in four travelers stayed in private accommodation in 2014, up from one in 10 in 2011, according to travel industry research firm Phocuswright’s annual survey. “We have seen some unbelievable, I mean it’s really amazing, growth,” said Douglas Quinby, vice president for research at the firm. Airbnb has a particularly large footprint in big cities and dense urban areas, he said.

Short-term home rentals allow hosts to make extra money and can give travelers a cheaper option than a hotel. Home rentals can also draw tourists into new neighborhoods, where they spend money on local businesses.

When Airbnb studied its economic impact on San Francisco in 2012, it found that Airbnb travelers generated $56 million in local spending and that Airbnb guests tended to stay longer and spend more money than hotel guests.

But many online listings are illegal. In New York City, a state investigation found that 72 percent of the 25,532 units listed for rent on Airbnb from 2010 to 2014 appeared to violate state and local laws. The state prohibits renting out an apartment for less than 30 days in most apartment buildings, for example, if the host is not present.

Hosts who rent out their places are supposed to charge guests applicable state and local taxes—like sales or lodging taxes—and pass on that money to the government. To do so, they may have to apply to city revenue departments for permission to file taxes like a business.

Data from a number of cities suggest that few hosts are doing so. Airbnb rentals incurred an estimated $33 million in unpaid New York City taxes, the state investigation found. Dallas has about 700 Airbnb listings but just two hosts registered with the city, the Dallas Observer reported.

Cities are also finding that some hosts are essentially hoteliers. New York’s investigation revealed that 6 percent of Airbnb users controlled over a third of all bookings, and some of those users were managing 10 or more properties.

The hotel industry is not amused. “This isn’t the sharing economy; this is a new form of the hotel industry that’s not being taxed and regulated,” says Troy Flanagan, vice president of state and local government affairs for the AH&LA.

Websites like Airbnb and HomeAway hold hosts responsible for complying with government rules and regulations. But they don’t check hosts’ paperwork or remove listings by hosts who violate city rules. If the sites did so, they’d have a much smaller footprint in Manhattan.

In some cities and states, particularly those that want to encourage tourism, legalizing Airbnb hasn’t been particularly controversial. Across the Hudson from New York City, Jersey City Mayor Steven Fulop, a Democrat, plans to allow short-term rentals throughout all residential areas, a move he says will encourage innovation and attract visitors.

Airbnb has agreed to collect and remit taxes on behalf of hosts in Jersey City, as it has in 13 other cities and four states. Jersey City thinks the agreement will raise $1 million per year.

“Our community wants to pay their fair share and we want to help,” an Airbnb spokeswoman said.

Rhode Island offered short-term rental services a deal in its fiscal 2016 budget: if they collect and remit state and local taxes, cities can’t restrict hosts from renting for short periods of time. The state calculated it would raise about $700,000 from the deal, which Airbnb took.

“We wanted to make sure Airbnb could thrive here, and the fact that it generated additional tax revenues made it all the better,” Rhode Island Commerce Secretary Stefan Pryor said in a statement. Rhode Island is going to spend the new revenue to promote tourism.

In other places, like San Francisco and Portland, Oregon, legalizing transient rentals has meant years of city council debate and raucous public meetings. Both cities are already tourist destinations, and both are grappling with rising rents.

San Francisco and Portland now require people who want to rent out their rooms, apartments or homes to register with the city planning and revenue departments. The two cities allow unlimited nights of short-term rentals while the host is at home and limit rentals when the host is away.

The cities have other requirements, too. San Francisco requires hosts to get liability insurance and bans them from renting out low-income or government-subsidized housing. Portland requires hosts to install smoke detectors, get permission from their landlords, and tell their neighbors about their new business.

It’s proving difficult to impose these new rules on what has been, essentially, a black market. Airbnb has agreed to pay taxes on behalf of hosts in both cities. But Portland has sued HomeAway and assessed fines on eight other short-term rental sites for failing to follow city rules, including paying taxes.

HomeAway co-founder Carl Shepherd told the Washington Post in January that his company can’t be held responsible for remitting taxes. It operates like a classified section and doesn’t handle any money, he explained.

In San Francisco, only 728 hosts have registered units with the city so far, according to a new office set up by the mayor to monitor short-term rentals. The office relies on complaints from neighbors to track down hosts who aren’t complying with the law.

Although rental listings are prominently displayed online, the city has no way of knowing for sure how many hosts are renting properties and for how many nights a year. “What we’ve learned,” Campos said, “is that without booking data, there’s no way for us to really verify that the rules are being followed.”

Proposition F, the ballot measure San Francisco votes on today, grew out of Campos’ proposed changes to San Francisco’s new rental law. Among other things, the controversial proposal would require hosting platforms to tell the city the number of nights booked per unit per year and to only list rentals registered with the city. It would place additional reporting requirements on hosts, and give neighbors new power to report violations.

The result would be major regulatory roadblocks on Airbnb and other home-sharing startups that are trying to expand as rapidly as possible. Breaking the rules is part of the culture at companies like Airbnb, Campos said. That could be why the company’s recent ad campaign misfired. “It’s like, well, everyone else has to do that!” he said of the company’s reminder that it’s paying taxes. “You don’t get a gold star for paying your taxes and paying them three and a half years late.”