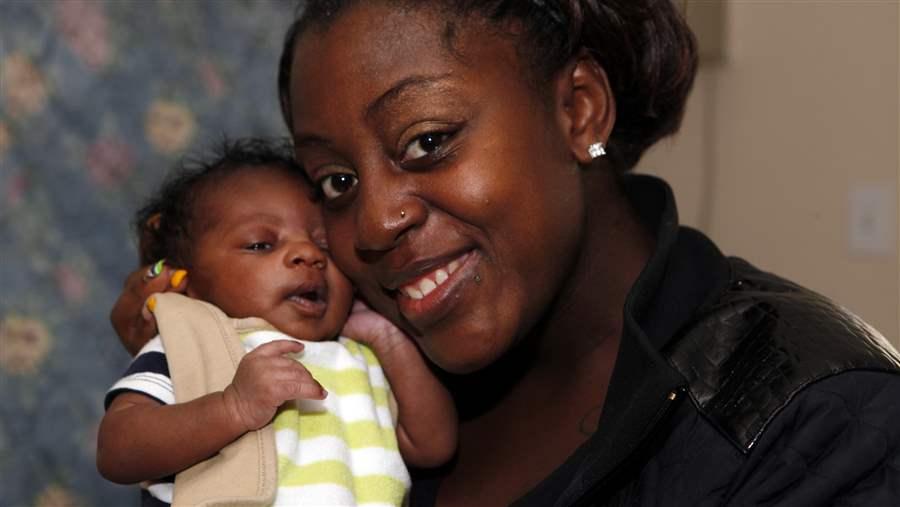 Victoria Lynch, with her son in her Denver apartment, was placed in foster care at age 15 and became a victim of identity theft when someone used her Social Security number to secure a job. Twenty-one states have passed laws that allow parents or guardians to freeze their child’s credit record.

This story has been corrected to attribute comments on parents who might steal their own child’s identity to Jeffrey Karberg, of the Maryland attorney general’s office. They were not Del. Craig Zucker’s comments.

For some it happens when it’s time to buy a car. For others, the crime reveals itself on a student loan application, or a denied credit card request.

Young people whose identity has been stolen often find out too late—as they hit adulthood and a check of their credit finds fraudulent debt or outstanding bills. For many, this means they can’t make big purchases, establish utility accounts, go to college or even qualify for social services.

“An identity thief would much rather steal the identity of a child than an adult millionaire,” said Maryland Attorney General Brian Frosh, a Democrat. “They can take that identity and use it for years without anybody finding out.”

In 2012, Maryland became the first state to enact legislation targeting this unseen theft by allowing parents and guardians to preemptively freeze their child’s credit record. Arizona, Connecticut, Maine, North Carolina, Tennessee and Utah passed such laws in 2015. In total, 21 states have enacted similar measures, according to the Consumer Data Industry Association (CDIA).

Under the laws, a parent or guardian can contact the three major credit reporting agencies—TransUnion, Equifax and Experian—to request a freeze, making it impossible to use a child’s Social Security number and other identifying information to establish credit.

The laws act as a roadblock for identity thieves by preventing the creation of a credit report, a document lenders review when determining a consumer’s creditworthiness, said Eric Ellman, who helps states enact the child credit freeze laws on behalf of CDIA.

A number of states allow parents to freeze their child’s credit report, but those measures are not as effective because the existence of a credit report means credit has already been established, likely deceptively, in a child’s name, Ellman said.

On average, 7.5 percent of calls to the hotline run by the California-based Identity Theft Resource Center between 2010 and 2014 were from people seeking assistance with child identity theft, said Karen Barney, program director at the center.

Advocates say the state laws make up for years of inaction on child identity security. Some of the reporting agencies are acting, too. Equifax officials announced this month that parents in all 50 states can use their services to request security freezes on children’s credit.

In Maryland, officials are partnering with hospitals to make sure families with young children know they can suspend access to their child’s credit.

By putting information about credit freezes in pediatricians’ offices and hospital waiting rooms, Frosh said he hopes young people won’t be blindsided when they try to establish financial independence.

Jeffrey Karberg, who works in Frosh’s office, said he doesn’t track the number of people who say their identity was stolen when they were children. But he said he’s often heard stories about theft committed by a parent or family member who used a child’s information to open an account when their own credit rating was poor or a credit report showed outstanding debts.

For instance, a parent struggling to pay bills might use a child’s Social Security number to establish the credit needed to open a utility account or get a cellphone, he said. Or a family member could use a child’s unblemished information to pass a credit check for a job, potentially disqualifying children from welfare benefits because records would show them earning money.

Identity theft can go unreported, Karberg said, because police reports are required to clear it up and adult children can be reluctant to turn in their parents or family members.

Karberg said he hopes parents will act when a child is young, before some of them might feel the need to steal their own child’s identity because of financial trouble or other family crises.

“If mom or dad has a substance abuse problem, maybe their counterpart puts this in place,” he said. “Or they do this before they lose their job and need to keep the lights on.”

Maryland Del. Craig Zucker, a Democrat who sponsored the 2012 legislation, also championed legislation the following year that requires the state to request security freezes for children who are in the custody of Maryland’s social services or in a foster home.

Maryland is the only state with a law to freeze the credit of youth in the foster system. But Ellman, with the CDIA, said such legislation is largely unnecessary because existing credit freeze laws allow any guardian, including state officials who supervise youth, to establish the credit restriction. Some states have laws to help children in foster care access their credit reports and resolve fraudulent records.

Freezing children’s credit records is a step in the right direction, Barney said, but it requires credit agencies to create files for children, which can contain errors that may have to be sorted out in adulthood. Credit freezes also require families to retain a personal identification number that is needed to unlock a child’s credit when they turn 18.

Instead, Barney prefers a Utah program, which allows parents to flag their child’s Social Security number and other identifying information to be monitored by the state. Parents of children in the program are notified of potential fraudulent activity related to their child’s information so they can investigate identity theft.

The program, which tracks children’s information, in a partnership with TransUnion, until they are 17, has enrolled nearly 12,000 children, according to Utah’s attorney general. The program also prevents creditors from issuing credit to anyone attempting to use the information of children enrolled in the program.