Workplace retirement savings plans can be a critical piece of the retirement security puzzle, but more than 30 million private sector workers lack a retirement plan at work, and levels of coverage and participation differ widely across the states.

An analysis by the Pew Charitable Trusts (using 2010-2014 data from the Current Population Survey) shows that 42 percent of full-time, full-year private sector wage and salary workers between 18 and 64 did not have access to a workplace retirement plan. Among states, this percentage varied by more than 20 percentage points. 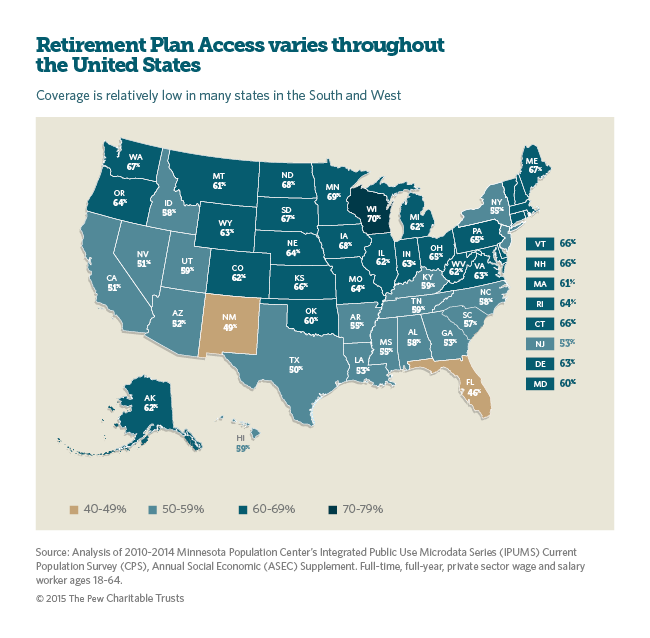 State variation in access to private retirement plans is largely attributable to the underlying business and worker characteristics in each state. For example, workers in the leisure and hospitality industry – which is more common in states such as Nevada, Hawaii, and Florida - are less likely to have access to an employer-based retirement plan. These types of businesses can face relatively high employee turnover and economic volatility, two factors that can make offering a retirement plan less attractive or even economically infeasible for employers. Small businesses also have low rates of plan sponsorship, and Western states tend to have higher concentrations of small firms than other states.

Large variations in retirement plan access among various socioeconomic subgroups also contribute to differences among the states. Sixty-two percent of Hispanic workers lacked access to an employer-based retirement plan, while the comparable figure among white, non-Hispanic workers was just 37 percent. Hispanic workers are far more common in states such as New Mexico, California, and Texas, where they made up over a third of the private sector workforce.

Research suggests increasing access is an important component in improving retirement preparation. Participation among workers with access is not universal, but the vast majority of workers who reported that their employers offered a retirement plan took advantage of this opportunity. In every state Pew analyzed, at least three-quarters of workers who had access to an employer-based retirement plan reported participating. In several states, this take-up rate was around 90 percent.

Federal policy has the largest impact on retirement, but more than half of states have introduced legislation designed to either study or create state-level retirement saving solutions for private sector workers who do not have a workplace plan. For example, Illinois created the “Secure Choice Savings Program,” which requires certain employers to offer a plan or automatically enroll workers in new state-run payroll deduction saving program. Washington state is taking a different approach by creating an online marketplace that small employers and the self-employed can use to find qualifying retirement plan options. States differ and as policymakers work to improve retirement plan access and participation, it is important to consider each locality’s unique characteristics. Pew has several upcoming research products designed to illuminate the current gaps in private retirement plan coverage among the states. Better understanding these issues can help legislators craft effective retirement policies that meet the needs of employers, taxpayers, and workers.