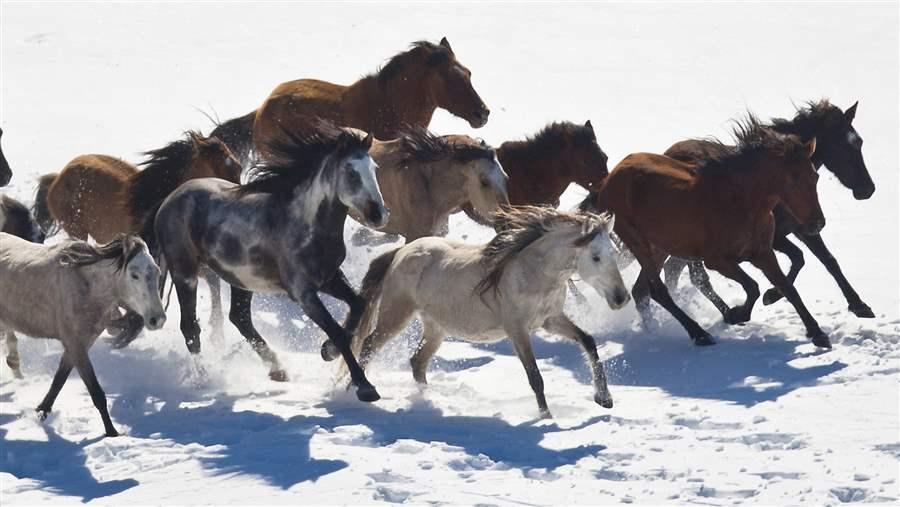 It’s a battle long fought, but seldom won: States want to gain control of federal land within their borders.

The Bureau of Land Management (BLM), the U.S. Forest Service, and other federal agencies control vast swaths of the land in some Western states, as much as 80 percent in Nevada. But local residents are often frustrated with federal policies governing preservation, recreation or natural resource development. In particular, many question the federal government’s commitment to preventing natural disasters like forest fires.

When states do manage to recapture federal land, it tends to be smaller parcels the federal government cuts loose for a specific purpose, such as building a road or an airport. Occasionally Washington will sell a parcel that is surrounded by private property or serves no public purpose.

In 2015, all 11 Western states considered measures calling for the transfer of federal land to state control. But only a handful of bills passed, and none resulted in a transfer of land.

Those long odds, and a reluctance to spend state money on land management, have spurred some states to try a different approach. Instead of taking on the federal government in a futile fight for ownership, they are arming counties with money and expertise to help them convince federal officials to hew more closely to residents’ interests.

Colorado is one of the states at the forefront of this new approach. This year, state lawmakers there approved $1 million in grants for counties that want to influence federal land use decisions. County leaders can use the money to hire consultants to evaluate data, provide scientific research or attend BLM coordination meetings. The law authorizing the grants also requires state agencies to provide additional expertise and assistance to counties when they ask for it.

Democratic state Rep. KC Becker, a former attorney for the BLM, said many county leaders in Colorado don’t realize how much influence they can have with federal officials. She pointed to a “consistency provision” in the Federal Land Policy and Management Act, a 1976 law governing BLM oversight of public land, which requires management that conforms, at least generally, to what local leaders want.

Becker and her Republican co-sponsor, Rep. Bob Rankin, said they wrote the bill to promote cooperation, rather than confrontation, with the federal government.

“Some people just want a takeover, but a lot of those state laws are more symbolic. I don’t want to make a point, I want to make a difference,” Becker said.

Rankin said the grants are useful to counties even in cases where local leaders are fundamentally opposed to federal policy. He pointed to oil drilling as an example. “Say they’re discussing the impact of a new drilling permit. Maybe the county is for it or maybe they’re against it, but they can have a consultant for the process,” he said. Rankin said the outside help can be used to better understand the process, provide outside analysis, and help draft county responses to federal proposals.

The first grant awarded under the Colorado program was for just under $25,000 to Gunnison County, home of the Gunnison sage-grouse.

The county is challenging the U.S. Fish and Wildlife Service’s decision to place the bird on the federal endangered species list, arguing that its own conservation efforts on private land are sufficient.

The wildlife service’s designation also has prompted the BLM to make some changes. The agency is proposing amendments to the management plans covering the Gunnison sage-grouse habitat in multiple counties near the Utah-Colorado border.

Jim Cochran, the wildlife conservation coordinator for Gunnison County, said even as the lawsuit proceeds, the county is using the grant money to hire outside experts to track the 11 proposed amendments, which would likely effect grazing and recreation on public land.

Cochran, a wildlife biologist, said soil and range conservation experts are analyzing how land and soil is affected by animal and recreational use and are helping the county draft responses to the BLM proposals using that analysis.

“We’re partners in many things. But they’re federal, and we’re local, and we have different constituents,” Cochran said. “We’re working with them, but we’re very much concerned about protecting our interests.”

The BLM said its processes are meant to encourage public involvement.

“The BLM supports state and local efforts to engage with the BLM,” the agency said in a statement.

Utah is using multiple methods to get what it wants from federal land managers.

The state has not abandoned its attempt to get federal land into state hands. A 2012 state law called on the federal government to transfer to the state all public land that is not designated as a national park or wilderness area or owned by Native American tribes—about 30 million acres in total, according to the Salt Lake Tribune. State Rep. Ken Ivory, a Republican, said because the federal government did not comply with the 2012 law, the state has set aside $4 million for a lawsuit challenging federal control of the land and is assembling a legal team.

But at the same time, the state is pursuing other avenues to get what it wants. This year the state passed a law requiring every county in the state to develop a resource management plan.

State Senate Republican Majority Leader Ralph Okerlund, who sponsored the legislation, said the new requirement not only helps create a statewide plan, but it also prepares counties to deal with the federal government and argue that federal plans should be consistent with theirs.

Some Utah counties have long coordinated with the federal government on land issues, but other areas that are more sparsely populated never had the money to develop thorough plans.

The state office of public land policy could serve as a resource for interested counties, but the onus is now on counties to have a plan in place—and the state will cover half the cost.

Mike Worthen, the natural resource management specialist for Iron County, said not all counties are aware of how involved they can be in the federal planning process or of government regulations requiring consistency. He said it’s important for counties to have a plan in place before any federal level changes are proposed.

“Otherwise they falter when they don’t have an adequate county resource plan to explain what they want, and then they have nothing to fall back on when the federal government comes back with a proposal,” Worthen said.

Okerlund said counties should generally have a vision for the land within their boundaries, but requiring the plans helps them make decisions about how land and natural resources should be used before the federal government does.

“Local governments ought to be involved in the process, but to do that they need a plan that shows how the resources in their jurisdiction are important to them and how to use them,” he said.