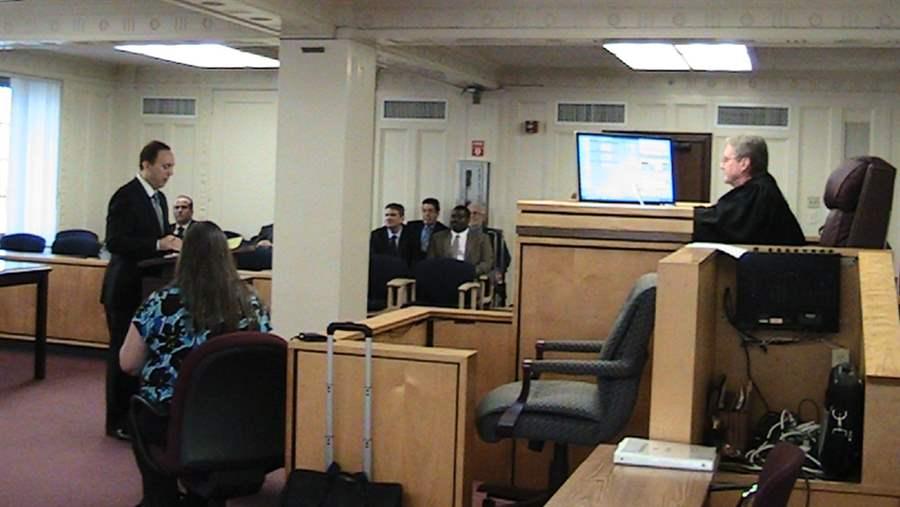 MIAMI — From his courtroom perch, Miami-Dade Circuit Judge John Thornton has seen all kinds of business disputes. There was the condo developer who sued his general contractor alleging serious construction defects, and the fight between two former partners over the creation of a health insurance app. And there was the suit against a developer who allegedly extorted and defamed one of the nation’s largest homebuilders, ending in a $1 billion judgment.

Much like other specialty courts that only deal with drugs or mental health, these courts typically hear cases related to business disputes, many of which are complex cases.

Supporters credit business courts for handling time-consuming corporate lawsuits that can otherwise languish on the docket for years and clog the courts.

“These are complicated issues, and businesses need decisions made in as short a time as possible, with an end date in sight,” Thornton said. “It’s good for the business community and the judicial system.”

Advocates say the courts’ quick resolutions can also make a state more attractive to companies deciding where to locate.

But critics say the courts can create an unfair, two-tiered system—one for businesses and one for everyone else—and some consider them an affront to the judges who ordinarily would hear such cases.

It amounts to “special courts for special people,” said Bryan Blevins Jr., president of the Texas Trial Lawyers Association, which fought a legislative proposal this year to create a business court in the state. 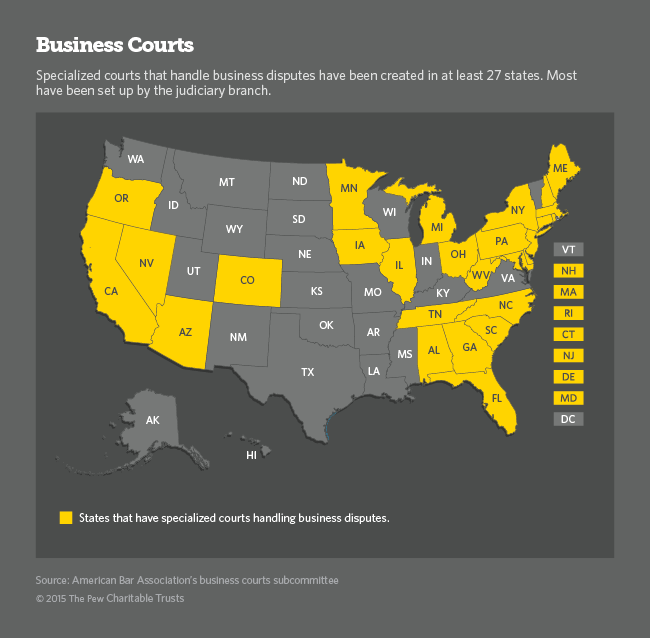 Specialized courts that handle business disputes have been established in at least 27 states, from Arizona to Maine, according to the American Bar Association’s business courts subcommittee. A 28th, Indiana, will join the list in 2016, when its court is to begin hearing cases.

The first business courts started in the mid-1990s, mostly as pilots, and there has been a steady growth ever since, said Lee Applebaum, an attorney who formerly chaired the ABA subcommittee. In most states, they are part of the regular civil court system, but have their own docket.

Many of the judges either have expertise in business or commercial law from their time as lawyers or have developed it through hearing such cases on the bench.

“The idea of the business court is the specialized judge who knows how to handle a business or commercial case and is assigned from beginning to end,” Applebaum said.

Ordinary trial judges may not have the knowledge or experience to manage these complex cases, supporters say. In some places, multiple judges have been handling different parts of the same case. And often, a judge could be dealing with a medical malpractice case one day, a slip and fall the next and a corporate trade secret theft the following day.

Richard Renck, the current ABA business courts subcommittee chairman, said many state judiciary systems interested in setting up business courts looked to his state of Delaware for inspiration. It has a separate Court of Chancery, created in 1792, which handles complex commercial disputes.

“A case that might take three, four or five years in another state, we can often do here in 18 months or less,” said Renck, a corporate lawyer. “These disputes get heard quickly and fairly. A regular [civil] judge can’t give the big complex case the attention it needs. You’re always putting out fires.”

Experts say no national study has examined whether having a business court unclogs the rest of the civil court system. But at least one jurisdiction has done its own research.

A 2014 report by the Fulton County (Georgia) Business Court found that on average it took 608 days for it to handle complex contract cases, compared to an estimated 1,746 days on the general docket.

While business courts vary from state to state and county to county, most cases involve disputes between businesses or within a company among its owners, officers or board.

“This isn’t David versus Goliath,” said Bill Raftery, an analyst for the National Center for State Courts. “This is Goliath versus his younger brother.”

Some business courts set a minimum dollar threshold. In Miami, which created its Complex Business Litigation Court in 2006, cases must involve a dispute of more than $150,000 and meet other criteria.

“You have high stakes, sometimes involving tens or hundreds of millions of dollars,” said Jennifer Bailey, administrative judge for the Miami-Dade Circuit Court, who hears business court cases when Thornton has to recuse himself. “We know how to manage cases with 40 lawyers involved. There are often an enormous number of moving parts.”

Thornton’s Miami courtroom, 10-1, is an oddly-shaped room with pale yellow walls and large pillars in its center. The court deals with about 300 cases at any given time, Thornton said. He’s helped by a case manager and staff attorney. The normal caseload for regular civil judges is about 1,500, he said.

“It’s working well, and matters are getting decided in a timely way,” Thornton said. “Our court is also freeing up other civil judges to get their cases to resolution faster.”

“The concept was that we’d have a procedure in place to move a case along with a single judge—that there would be expertise and there would be a body of case law developed,” Gale said. “Our court has published in excess of 500 opinions.”

The court, which is statewide, was created by the judiciary branch in 1996 with a single judge. In 2004, the Legislature agreed to expand the court to three judges. The court continues to grow: a fourth judge has been nominated and a fifth is expected by year’s end.

Gale said the court, funded out of the state judicial budget, hears an “extraordinarily wide array of cases,” from inventor disputes to mergers and acquisitions.

While all of the court’s cases may be business-related, Gale noted that it shouldn’t be considered “pro-business.” “It’s a court that has expertise in business-related matters. There’s no advantage that a business has over an individual.”

The judiciary typically creates a business court on its own, but occasionally legislators take the reins.

In New Hampshire, the Legislature enacted a law in 2008 allowing for the creation of a business court. Michigan’s Legislature passed a law in 2012 requiring circuit courts with three or more judges to establish a specialized business docket.

In Texas this year, legislators debated a measure that would have created a separate chancery court and an appellate court to handle complex business cases.

While the state’s legislative budget board estimated that the new courts would cost $20 million to run over five years, the board said the courts would be fully paid for through required filing fees.

Under the measure, the governor would appoint seven judges. The bill was controversial in a state where judges are elected. It passed out of a House committee but never made it to the full House.

“If Texas doesn’t have one, we’re at risk of losing new business from giant corporations to other states,” he said. “If they can’t get their disputes solved efficiently, they’ll go somewhere else.”

Michelle Harner, director of the business law program at the University of Maryland School of Law, agreed that the specialized courts can be attractive to business. “If there is a forum to resolve business disputes in a timely and efficient manner, that can be beneficial in encouraging businesses to come to and stay in the state.”

Villalba’s bill faced strong opposition from trial lawyers and defense attorneys, who objected to putting special courts in the hands of a small group of appointed judges and giving special treatment to companies.

Blevins said that creating a totally separate court for corporations also would be unfair to citizens.